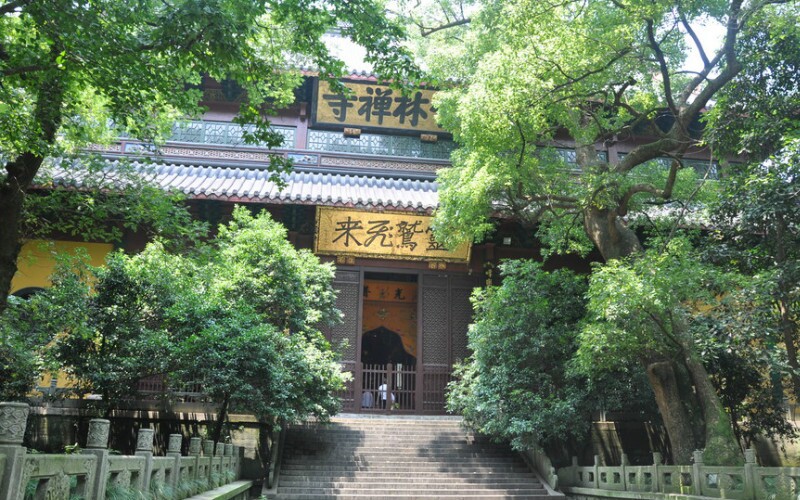 Lingyin Temple or Temple of the Soul's Retreat is one of the largest and most visited Buddhist temples in China, which holds the largest statue of the Buddha Sakyamuni in the lotus position. It was built in 328 AD by Indian Monk Huili. The temple is now very popular among tourists and pilgrims as thousands visit it per day during peak season.

Lingyin Temple got its name because of tranquil surroundings. Sheltered by forested hills from three sides, the temple is a quiet and serene sanctuary (when it is not thronged with visitors). Over history the temple has been damaged and undergone renovation several times. It has recently been rebuilt in its original style.

The temple consists of the Hall of the Heavenly King, Hall of the Great Hero, Hall of the Buddha of Medicine, East and West Winding Corridors and several other buildings.

In the center of the Hall of the Heavenly King sits a statue of Maitreya, the fat, bare and bellied Buddha with a smiling face – the laughing Buddha.

The Statue of Sakyamuni Sitting on the Lotus Flower

A magnificent statue of Sakyamuni, the founder of Buddhism, is located in the very heart of the Hall of the Great Hero, the main hall in the temple. The 19-meter tall statue is seated on a 10.5-meter high lotus flower amidst great red pillars and murals. A colorful sculpture of 150 Buddhas is situated behind it. One more recently added hall holds 500 Arhats: bronze statues resembling 500 of the earliest high-ranking Buddhist disciples in China.

As an important Buddhist temple in the region, Lingyin Temple also contains a large collection of Buddhist treasures and relics, which are significant for the development of Buddhism in the region.

Most buses are 1-3 yuan, while a taxi will cost you CNY 10 for the first 3 kilometers, then 2-3 yuan per kilometer: that's about 15 yuan from West Lake.

Flash photography and smoking are forbidden inside the temple, although noise (including prayers and psalms) and incense sticks are allowed everywhere. See How to visit a Chinese Temple.

If you are going to Hangzhou, see our most popular tours for inspiration.

Or contact us to tailor-make your own unique tour according to your requirements.