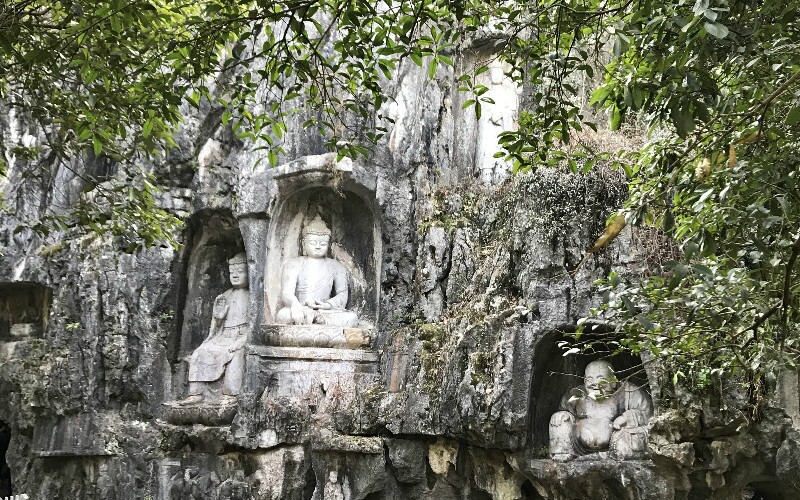 Being 168 meters tall, Peak Flown From Afar (Feilai Peak) is composed of limestones and is home to various fantastic caves owing to the long-term ground water solution, including Longhong Cave, Jade Breast (Yuru) Cave, Shooting Sun (Shexu) Cave and Roaring Ape (Huyuan) Cave. The grotesque rocks of the caves are of various shapes, and some are like flying dragons, some like running elephants, some like frightened apes and some like crouching tigers.

Characteristics of the Peak Flown From Afar The Peak Flown From Afar is towering and precipitous with a majestic outline, featuring ancient trees, grotesque rocks, deep caves and solemn statues of Buddha.

The old treeroots bulk above the ground and the branches are twisted on the peak. The major caves are concentrated to the south-east of the peak, and Longhong Cave holdsthe statue of Kwan Yin.At its entrance stands Ligong Tower (or Lingjiu Tower), the only existent tower fromthe Ming Dynasty (1368-1644) in Hangzhou, and it tapers off from the bottom to the top with six–stories.

On the left of Longhong Cave are the Shooting Sun Cave and One Thread of Sky.Tothe west of the peak runs a cold spring, and it is as clear as crystal,being partially hidden among the trees.Asmall and exquisite Cuiwei Pavilion stands halfway up the peak, which was built by Han Shizhong to commemorate Yue Fei, a famous patriotic general of the Southern Song Dynasty (1127-1279).

The statue of Vairocana Buddhais the most delicate one of its kind ever built in the Song Dynasty (960-1279). The statue of Maitreya Buddha is the largest among all the statues of Buddha on the peak, built in the Southern Song Dynasty (1127-1279), and his face is wreathed in smiles. The Buddhist statues of the Yuan Dynasty (1271-1368) are represented by the statues of Samantabhadra Bodhisattva, Manjusri Bodhisattva and Vairocana Buddha.

To the east of the Peak Flown From Afar stands Tianzhu Temple, built in the Sui Dynasty (581-618). Walking south-west along a stream, you come to Fajing Temple and Faxi Temple (built in the Five Dynasties), where you can fully immerse yourself in the strong ambience of Buddhism.