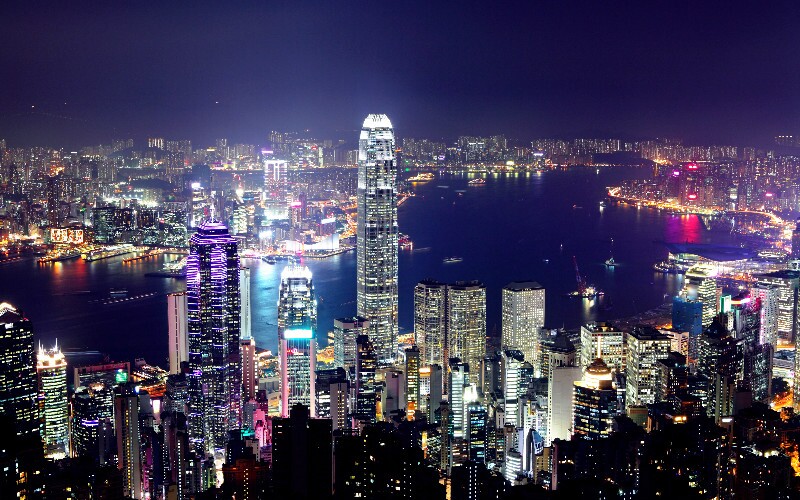 The Symphony of Lights in Hong Kong

The unique Hong Kong city light show, the Symphony of Lights (幻彩詠香江) holds the world record for the largest such permanent daily city light show for 14 years, and 47 buildings participate. The lighting effects on the buildings are now much improved, and the grand scale on both sides of Victoria Harbor makes it spectacular for tourists.

The Light and Sound Performance is a Real Spectacle The locals along with the hundreds or thousands of tourists who come every year to Victoria Harbor and the Avenue of Stars in Tsim Sha Tsui at 8 pm every evening.

The harbor is the stage, and the dark slopes Victoria Peak are a beautiful backdrop as the clouds stream overhead.

Then at 8 o’clock, the lasers start strafing the clouds, the background music and commentary begins welcoming the crowds to the show, and the lights on the buildings start to perform musically choreographed movements and patterns for 10 minutes.

The Symphony of Lights Is Newly Revamped/Modernized 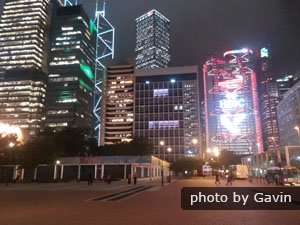 Symphony of Lights up close in Central.

With a symphony by the Hong Kong Philharmonic played and with forested mountains as the backdrop and the expanse of the harbor as the stage, the best place to watch is from the Avenue of Stars. This is especially true if you want to also watch the Cultural Center light up with graphics for the seasonal 3D Pulse show too.

Now a myriad of searchlights, lasers, wide screens, LEDs, and other lighting illuminates this spectacle that nightly transforms the Hong Kong skyline around Victoria Harbor.

The show has been further expanded with the total number of participating buildings in 2018 increased to 47 on both sides of Victoria Harbor.

The lights are now better coordinated and controlled as well, so there is a more interesting scene as the buildings go from dull to very bright to the crescendos of music receding in waves and returning back again.

Before, the sound was dinny, and was a letdown. The music was like circus or parade music, and monotonous. The orchestral music didn't sound very good. This new musical piece by the Hong Kong Philharmonic actually sounds beautiful, and the sound system (at least outside of the Cultural Center near the Star Ferry) has improved as well.

The 2018 music sounds interesting, and uplifting emotionally. The prior music was actually tinny, roboty, a little like computer generated music, and in a way depressing. In the past also, there was too much narrative (it was almost jabbering). But now people can enjoy a beautiful symphonic piece that was created specially for the show.

Created by an Emmy Prize Winner

The show was created by an Emmy Prize Winner, Richard Lindsay. He stressed the importance of the soundtrack that was jointly produced by composer Christian Steinhäuser, conductor Matt Dunkley, and the Hong Kong Philharmonic Orchestra.

“We have got something that is very ‘fusion’ that really fits Hong Kong – both a classic show, and also very futuristic,” Lindsay said.

The new piece runs its course through lulls and rapid rhythms, majestic, harmonious phases and simpler electronic parts that mix a wider spectrum of tempos and moods for a broader display of lighting effects than previously.

Near this Bruce Lee on the Avenue of Stars is where the views are best.

The show gradually grew bigger and better over the past 14 years, although during the last several years, the show actually grew worse. It seemed somehow neglected, and actually grew duller. Many tourists complained it didn't live up to the hype. It was a disappointment given the great advancement in lighting and graphics technology in the past decade.

Word about the mediocre performance got around, and annual attendance fell from a peak of 1.8 million in 2011 to 1.45 million in 2015.

However, in the last few years, the buildings grew more colorful as they added multicolored LED. What was needed was a better choreography to harness their energy. But the sound was still dinny, and there was too much dialogue.

The show was quite boring actually a year or two ago, and the lighting on the buildings during the show and afterwards was much the same. There seemed to be little attempt to make the show flashy or to coordinate the building lighting systems for effect.

As recently as the spring of 2017 for example, there had a few green lasers on a few buildings and a few white search lights shooting light beams upwards, but now there is a burst of brilliant white light pulses on several buildings.

The Lights Are Brighter/More Powerful

The buildings are more colorful and brighter due to the use of more LEDs. New LED boards have also been added. Now there are also more lasers shooting out beams and more very bright white search lights that at times present surprising crowns of spikes of white light on some of the buildings now.

The big splashes of light that appear together with more powerful, urgent crescendos impress people with a show of power, perhaps to signify Hong Kong's might as one of the world's financial capitals, and the harmony and dancing lights are graceful and more intricately fine-tuned, perhaps to convey a sense of sophistication and a harmonious cosmopolitan air, where Eastern and Western melodies, instruments, and beats combine to make a harmonious masterpiece.

There are wallfulls of shifting rainbow colors on several of the buildings faces. Several buildings stand out for having had a big lighting facelift.

Key Buildings in the Presentation

The Bank of China Building Catches the Eye The Symphony of Lights is colorful. The tall angular building in the back is the Bank of China building.

The Bank of China Building in particular has gotten a big lighting effect improvement which is important because it has a prominent position on the shore and its sharp angles draw attention.

Before, it actually had a boring light display during the Symphony of Light performance. The light patterns were repetitive as if automatic switches kept going through a repeated pattern even during the show.

It dominates the show on the right side of Victoria Harbor (looking across from the Avenue of Stars) with its tall, sparkling sharp-angled countenance. The lights are a lot more deft than in the past, flashing and pulsating to the mood and tempo of the music.

However, as before, the lights are still all white. It would be interesting to see it dressed in color.

The ICC Tower Dominates the Skyline on the Kowloon Side ICC Tower: For people watching from Hong Kong Island near the IFC, the big visual treat are the graphics played on the surface of the super-tall building. It is the world's 11th tallest building. In the last several years, its lighting effects have improved greatly as well. It too was once boring, but now tourists can spend minutes watching the pictures, words, and shapes play on the surface.

It however can't be seen well by the audience at the Avenue of Stars/Bay Harbour Mall/plaza area. People need to cross the harbor for that. Taking the few minute ride on the Star Ferry over to Central is an ideal way to get a closeup view. The patterns play all evening and not only during the Symphony of Lights.

As with the Bank of China building, the lights are all white. Perhaps one day, adding more colored LEDs will allow them to show colored video on the building's flat sides.

Now, innovative lighting display has turned the once bland dark, stodgy walls of the Hong Kong Cultural center into a head-turning huge screen of changing colors. That was a good idea. The center's featureless huge flat pale concave surface without windows makes it an ideal super-large, 200 meter wide screen for video and animated lightning

People used to ignore the dark boring building during the Symphony of Lights in the past, turning their back on it to watch the show on Hong Kong island a few years ago; but now, at the beginning of the show, the walls of the center light up in many colors as a fine prelude to the colors and bright lights of the show on the other side. 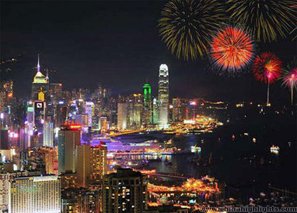 Christmas in Hong Kong: There is a seasonal Christmas display, and along with the usual 47 or so buildings that usually participate, a lot more put up special Christmas lighting displays that make the whole harbor area look better in December.

Chinese New Year in Hong Kong: Most buildings around the harbor amp up their light displays to complement the visual effects of the architectural choreography. The show gets accented with a huge Chinese New Year fireworks display each year where about 24,000 shells blast and boom.

A special seasonal treat you can watch for the Christmas/Hong Kong Winter Fest season, during the Chinese New Year, and during other times is the amazing 3D Pulse Light Show that plays on the Hong Kong Cultural Center and the Clock Tower. It is astounding and better than the Symphony of Lights. This show begins a few minutes after the Symphony of Lights end.

The laser audiovisual display dazzles the crowds in and around the plaza near the Star Ferry in Tsim Sha Tsui. The lasers are tuned for 3D projection, and they play up videos and pictures running on the walls of the Hong Kong Cultural Center and flying around the plaza. It is astounding, but expect it to be crowded. It is much more popular than the regular Symphony of Lights.

Where/When To Watch the Symphony of Lights

The Avenue of Stars has the best viewing since you can also watch the Hong Kong Pulse laser show behind you if it is being aired. While there, you can see the handprints and statues that commemorate Hong Kong's actors. There are permanent viewing stands there from which you can hear the accompanying music and dialogue.

A long pedestrian promenade extends eastwards from the Avenue of Stars about one kilometer. This promenade gives a view of Victoria Peak and the stunning skyline of brightly-lit skyscrapers on Hong Kong Island, but you can't see the 3D Pulse show from this vantage point. Neither can you hear the beautiful new music that is an important part of this event.

History of the Light Show The Symphony of Lights show (幻彩詠香江) was originally developed by the Hong Kong Tourism Board with the help on an Australian company called Laservision. It was part of the Avenue of Stars development project, and performances begin on January 17, 2004.

It originally included about 17 buildings on the Hong Kong Island side, but some buildings were added on the Kowloon side to balance the performance on both sides of the harbor.

The first show cost about 5 or 6 million USD to develop. The Guinness Book of World Records included the show as a world record event in 2005.

Touring China with China Highlights, you are in safe hands.

We specialize in private customized tours. Contact us if you would like us to tailor-make your Hong Kong tour.

You can also use these itineraries as a starting point: