How to Have Dim Sum and Yum Cha in Hong Kong 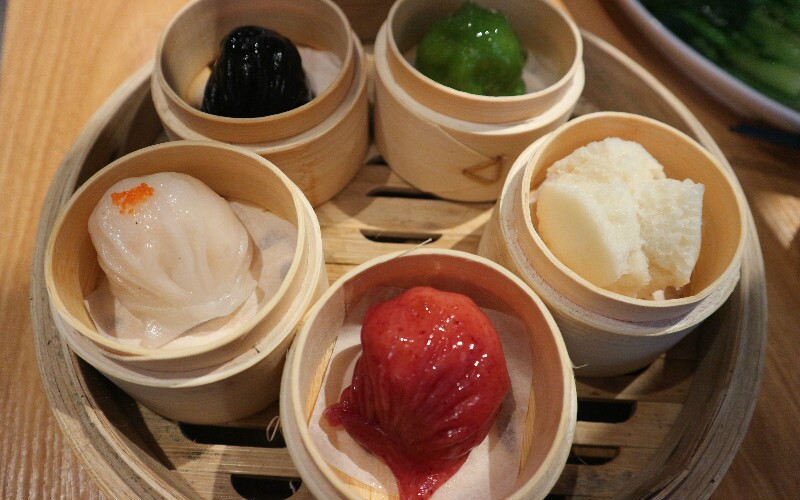 In Hong Kong, dim sum (the food) and yum cha (tea) go together for a great light meal.

Dim sum is a favorite kind of meal of the Cantonese people in Guangdong Province, Hong Kong and Macau. Small delicious morsels of food are served up and traditionally eaten while drinking tea (yum cha).

It is best experienced when eaten with a group for greater variety. Dim sum lends itself well to informal gatherings where the company and the table talk can be as delightful as the food.

Here are our suggestions about how you can enjoy eating dim sum and drink tea like a native Hong Konger and our recommendations about the best dim sum places for tourists.

What Dim Sum Is

During a meal, people usually eat a variety of dim sum with their favorite tea.

In Hong Kong, you can find zillions of kinds of dim sum. The phrase dim sum is a Cantonese word that means "touch heart" (點心). These are made to be eaten with chopsticks and are in the size range of bite-size or a-few-bites-size.

They can be meaty or starchy, salty or sweet or both, sour, sweet and sour, or sort of bland and flavorless. But Cantonese dim sum is never spicy hot. Cantonese dishes characteristically are sort of sweet, sour and almost never spicy-hot like Sichuan food.

They are made with wide range of ingredients that are often minced together including staples such as cabbage, fresh shiitake mushrooms, finely diced water chestnuts, scallions, shellfish, bamboo shoots, pepper, and ginger. Egg white and cornstarch are used as binding agents, and sesame oil is a favorite condiment. See How to Cook Dim Sum.

What Yum Cha Is

Eating dim sum and drinking tea is an ideal combination. The two go hand in hand.

Yum cha in Cantonese Chinese literally means "drink tea" 飲茶. They specifically mean: "drink Chinese tea" of which there are hundreds of special varieties but about 7 general types.

Cantonese often use the phrase "yum cha" instead of dim sum. Dim sum refers to the small-dishes of food and desserts, whereas yum cha refers to the act of having a meal involving such dishes while drinking tea. The two go hand in hand for Cantonese. One isn't complete without the other.

The practice of drinking tea with dim sum may have started when Chinese peasants coming in from the fields, exhausted from laboring, found tea to be a healthy refreshment with their meals.

The Tea Makes the Meal Healthier

Tea drinking today is beneficial for a number of reasons such as that it lowers blood pressure, protects the heart, helps to prevent obesity, helps to break down sugars and fats, prevents the onset of diabetes, prevents tooth decay, and increases immunity. Tea is the most popular of the Chinese medicinal beverages.

They ate small snacks while drinking tea. They found out that the tea aided digestion by breaking down the oil and fats that are found in deep fried dishes served as dim sum.

How to Get Hot Water Refills

Teapot lids should be left open or set ajar to signal for refills. The second and third refills are considered the best for most varieties of tea. Good quality Chinese tea leaves may be rebrewed up to about eight times with good results. So round after round of tea may be served from the same pot by refilling with hot water.

The refillings are necessary since you will find that the teacups are quite small. They are smaller than regular Western-style teacups, and the teapots are also sort of small. So to get a good drink of tea to wash down your food, you'll need to refill your cup often.

Jasmine Tea has little yellow or white jasmine flowers that give off a memorable scent.

There are several types of Chinese tea that are general served with dim sum in Hong Kong with varying fragrances, tastes and properties. They'll have different effects on you such as energizing, relaxing, and making you moody.

Cantonese order their favorite kind for the table, and they know the health effects of each. Different teas are thought suitable for different seasons and different people.

How Dim Sum and Yum Cha Is Done in Hong Kong

Dim Sum in Hong Kong is a traditional midday meal that they have for brunch or after lunch. It is meant to be a light meal, refreshing, and to be had with good company.

We can call it comfort food because this is close to the actual meaning of the words dim sum that mean 'touch heart.' People eat small treats and drink tea. Dim sum includes stuffed buns, dumplings, and other savory or sweet food items

In some ways, it is similar to an English breakfast tea gathering, elevenses, or afternoon tea, although it isn't eaten in people's homes but in restaurants. There is a big emphasis on tea drinking or "yum cha" ('drinking tea'). So having a dim sum meal is called "yum cha" in Cantonese.

Go at the right time and reserve seats.

Traditionally, yum cha is a meal or snack served for late morning brunch or in the early afternoon after lunch. Dim sum restaurants will serve at these times.

But nowadays, you can find dim sum served at any time. It is increasingly popular for lunch breaks and late evening refreshment with colleagues or friends in Hong Kongers busy schedules.

In most restaurants in Hong Kong, dim sum is served between about 9 am and 2 pm. But check the hours for the restaurant you want to go to. Make a reservation if you plan to dine in popular restaurants.

In smaller restaurants, sharing a table is a common practice. You might be asked to share your table or move to another table. But you won't find this to be so much of a problem in the higher priced restaurants.

In the busiest restaurants, dim sum dishes are steamed in advance in bamboo baskets and paraded around the restaurant on steam carts. The senses of hungry customers are titillated by the aromas, sights, and even the warmth of the selections, and you can choose your dishes straight from the steam cart, and the waiters/waitresses will mark your selections on your bill.

Beef balls (ow yok), phoenix feet (fung jow - chicken feet in reality), tripe, tofu and all manner of vegetables round out the usual basic offerings. However, it is common for a good dim sum restaurant to put out thirty or forty different kinds for customers to choose from.

In some restaurants, it is common for waiters to automatically bring tea, condiments, and non-ordered snacks that will be charged to your bill. Please check with the waiter about such additional charges before being seated. Be firm about no additional charges or food up front.

You can have sweet dishes such as egg tarts and red beans in coconut milk. If you are mainly after having a sweet snack, you can select the sweet dishes and round it off with some delicious tea.

How to Eat Dim Sum

Shrimp dumplings. Practicing eating with chopsticks is part of the fun of eating at a dim sum restaurant.

The first step of a typical meal after everyone is seated is to wash the utensils, dishes, and teacups with tea! This might seem quite strange to you.

But don't worry about wasting the tea. Cantonese typically won't drink the first round of tea that arrives at the table or the first pot of freshly brewed tea they make at the table by pouring hot water in a teapot with tea leaves inside.

Instead, they typically will rinse the tea before drinking it with a flush of hot water and then drink the next brew by refilling the teapot. So their custom, in order to insure that the utensils and dishes are sanitary, is to use the first batch of tea to wash up. They do this by rinsing the articles with the tea over bigger dishes or pans brought out for this purpose.

This is part of the fun and novelty of having dim sum and a good idea because in many restaurants the dishes might not be quite clean or sterilized.

Serving order: There are somewhat complicated rules about serving order depending on the company and the status of the people and their relationships. Calculating all this comes naturally to Cantonese who grow up in their culture, but for foreigners, here are general rules of thumb you can follow if you really want to eat dim sum like a native or if you want to be really polite with your Chinese companions.

Complicating the actual mechanics of this tradition (and adding to the fun), is that nowadays, these rules are less rigid and there is the new idea that it is good manners and friendship to be the first to pour the tea. So even older friends, your hosts, or people with seniority might try to be first to pour the tea.

You May Hear a Tapping Noise

The traditional Chinese way of giving "thanks" at a restaurant is to gently tap your slightly bent middle and index fingers on the table.

This is called a "finger kowtow." It is said that this practice originated when Emperor Qianlong (1644–1912) of the Qing dynasty was traveling incognito one day. He went into a teahouse with some companions, and in order to maintain his anonymity so that he didn't look like the leader of the group, he took his turn at pouring tea.

His companions wanted to kowtow or bow down and fall prostrate as part of the formality of the era, but to do so would have tipped off observers that he was the Emperor. So one of them tapped three fingers on the table. One finger represented his bowed head and the other two represented his prostrate arms.

In Hong Kong, there are literally thousands of restaurants and even street stands that serve yum cha and dim sum.

Gourmet restaurants such as Lei Garden specialize in fancy dim sum meals, and their prices are high. Other lower cost restaurants serve regular dim sum along with other common Cantonese food.

The Tastiest 10 Tastiest Dim Sum Restaurants in Hong Kong is our recommended list for tourists. They are in areas tourists will usually go for your convenience.

Having good dining experiences is an important part of touring. It would be helpful to have a local guide who can give you some insider recommendations on what to eat and where.

Our guides ensure that you order only the best Chinese cuisine or other styles for you. Dining and food orientated tours include:

Dim sum is a highlight of Cantonese cuisine.

See our suggestions about the best brunch places for tourists in Hong Kong for Western brunch and dim sum brunch.