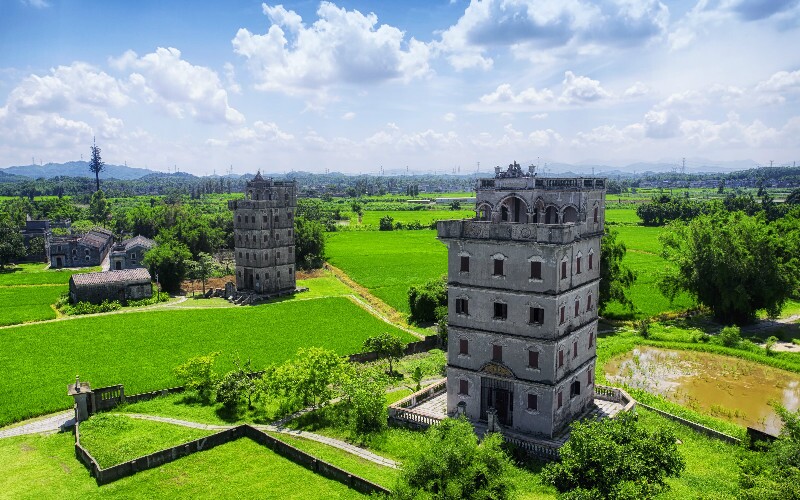 Many tourists traveling to Hong Kong usually extend their trips to Shenzhen or Guangzhou. Both of the cities are good gateways to learn about modern China. To experience traditional China, however, they are not the best.

Here, we have introduced the seven lesser-known cities around the Pearl River Delta or in western and eastern Guangdong where you can not only see the traditional buildings called diaolou, continuous mountains, and stunning stretches of coastline, but also taste authentic Cantonese cuisine and learn about the culture and street life. All are within 3 hours from HK by high-speed train.

During the Ming Dynasty (1368–1644), Guangzhou became a trading port with Southeast Asia and Western countries. Shunde, which is adjacent to Guangzhou, became an important commercial agricultural area in the Pearl River Delta and the people living in Shunde gradually became particular about cooking.

In the early years of the Republic of China, the catering industry in Shunde came into its heyday. Delicious dishes, such as crispy skin chicken, custard with double crème, and stir-fried milk, emerged and became part of the classic Cantonese cuisine.

Shunde people's love for food shows their love for life because only people who love life will cook all kinds of delicious food for themselves, their families, and guests.

Apart from enjoying the food, you can visit Qinghui Garden, a classic Chinese garden. Go to Shunde Museum to learn about the city’s history and present achievements. You can also enjoy some quiet time in Fengjian Water Town.

How to get there from Hong Kong: Head to Shenzhen or Guangzhou first and take a high-speed train to Foshan West Station.

Zhanjiang lies at the western end of Guangdong Province. It is an ancient and beautiful coastal city. It has desirable scenery that is less well-known to foreign tourists, even to the local people.

A maar lake is a rare kind of lake, which is formed differently to other crater lakes. Currently, only two maar lakes have been found in the world. One is in the Eifel region of Germany. The other one is in Huguangyan Scenic Area in Zhanjiang.

Naozhou Lighthouse, along with London Lighthouse and Cape Lighthouse, is one of the three famous lighthouses in the world, but few people know that. The tower is made of volcanic stone, without any mud. What's more, the 68 steps spiraling up around the central pillar are made of the same stone.

You can find many French architectural structures there as it used to be a French concession at the end of the Qing Dynasty (1644–1912). These include the former site of the French Minister's Office, Vidor Catholic Church, and Arcade-House Street.

How to get there from Hong Kong: Travel to Guangzhou or Shenzhen and then take a high-speed train to Zhanjiang West Station.

At the southern end of the Tropic of Cancer, there is an oasis, which appears to be like an emerald in the barren desert. This is Zhaoqing, which is the most beautiful city in Guangdong and the birthplace of the Cantonese aboriginal culture. It has a glorious history and culture, as well as an incomparable and beautiful landscape.

Go to Dinghu Mountain Resort where you can take a boat on the lake to appreciate the continuous mountains, making you feel like you are in a picture. Its gorges, canyons, and 10-peaked Mount Dinghu are covered in a blanket of green, making its views both memorable and constantly camera-worthy.

Explore the Seven Star Crags, which have picturesque limestone peaks as well as Buddhist temples. The beauty and serenity of this area make it ideal for a peaceful excursion, and the historical landmarks also present within this scenic spot add to the pull of this "tourist magnet".

How to get there from Hong Kong: A direct high-speed train can lead you to Zhaoqing East Station or you can transfer in Guangzhou. Kaiping is famous as being the ancestral homeland of overseas Chinese as well as for its architecture, art, and diaolou (watchtowers). It is located in south-central Guangdong Province.

You’ll know you’re near Kaiping when you see diaolou ascending from the rice paddies. There are 1,833 diaolou scattered around the city and countryside. Diaolou were built in stone to keep a look out for bandits and pirates. Diaolou were created by returning Chinese immigrants from their interpretations of towers that were inspired by Western styles. These diaolou witnessed Kaiping's transition from war to stability and from poverty to prosperity.

How to get there from Hong Kong: Head to Guangzhou and take a high-speed train to Kaiping South Station.

Jiangmen is located to the south of Guangzhou. There, you can enjoy a relaxing vacation in a hot spring resort as well as visit historic spots.

Jiangmen is the first city to be regarded as the homeland of hot springs in China. The hot springs there have good water quality. You can enjoy the beautiful scenery while relaxing in the hot springs, which is definitely an enjoyable activity.

You can go to Pengjiang District to see Jiangmen’s old city center. It is the oldest area in Jiangmen and there is a street that still retains its original appearance. When walking in the street, you can feel the authentic atmosphere.

How to get there from Hong Kong: Take a high-speed train to Guangzhou and transfer to Jiangmen East Station.

Shantou is a special city with its own dialect, food, and culture. Located to the east of Guangzhou, it tells its own story and is an attractive area.

Shantou was one of the earliest trading ports open to Western powers and one of the earliest special economic zones in the People's Republic of China. British-built villas, French-built churches, and traditional wooden storefronts and walkways are the witnesses of its history.

You cannot find many historical sites there as it was only opened as a trading port 100 years ago. But if you go there, you will be attracted to its tolerant and open-minded atmosphere.

Shantou people really enjoy drinking tea. Many families enjoy sitting around the table after a meal, just drinking tea and chatting with each other. There are many teahouses in Shantou. Find one so that you can get settled on a thick wooden chair, have a cup of the local tea, and try to immerse yourself into the world of tea.

How to get there from Hong Kong: A direct high-speed train will take you to Shantou from Hong Kong. Alternatively, you can transfer in Shenzhen or Chaoshan.

Shaoguan is located to the north of Guangzhou. It is a political, economic, cultural, and transportation hub in northern Guangdong. It has a history of 2,000 years and used to be a place of strategic importance in history.

Many people think that Shaoguan is an old-fashioned city. There are no skyscrapers, no high-end shopping malls, and no modern atmosphere, which you can experience in most of Guangdong’s cities. However, because of this, it has a charm that is different from other cities.

Shaoguan has a deep religious culture. You can go to Nanhua Temple to experience the religious atmosphere. It is one of the six famous Buddhist temples in Guangdong.

Consisting of more than 680 red gravel rock formations with a flat top and steep body, Danxia Mountain is another big draw. It is the largest and most beautiful danxia landscape scenic area and natural heritage site in Guangdong Province.

How to get there from Hong Kong: Take a direct high-speed train from Hong Kong to Shaoguan, or transfer in Guangzhou or Shenzhen.

Explore a Hidden China with Us

Want to explore the less popular destinations and take an unconventional travel route? Just tell us your interests and needs in our Create My Trip service, and we will tailor-make a unique tour for you.