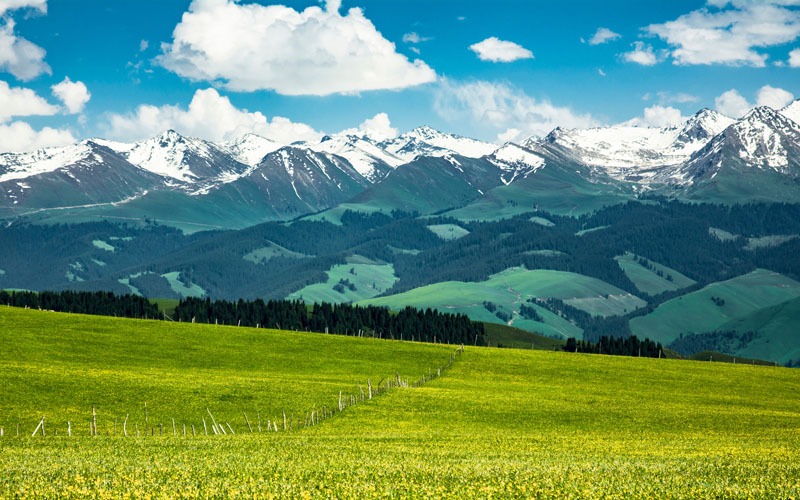 Ili is known for bright sunshine, blue skies, quiet lakes, colorful flowers, vast grasslands, snowy mountains, and friendly ethnic minorities. Ili is a place where you can relax yourself in a peaceful and picture-perfect world.

Yili Kazak Autonomous Prefecture is in the Yili River Valley between the north and south arms of the Tianshan Mountains in western Xinjiang Autonomous Region. Yining City is its administrative capital.

6 Things to Do in Ili

The Yili River and its tributaries, running through the valleys and basins, give birth to this fertile land of vast grasslands. Nature has endowed Yili with superior scenery.

Sayram Lake is one of the most famous natural sceneries in Xinjiang. It is called "the Atlantic's Last Tears" as it is the last (furthest east) place that warm moist air from the Atlantic Ocean falls as rain.

It is the largest and highest alpine lake in Xinjiang. You will be amazed at its transparent blue water, like blue dye has been poured into the lake.

Ili has many grasslands. Summer is the best time for a visit. Among the most popular grasslands are Kalajun and Nalati.

3) Walk into a Seas of Flowers — Romantic Beauty

Every June, Yili River Valley will turn into a lavender ocean. Xinjiang's lavender has been listed as one of the world's eight well-known varieties.

The rape flower season comes in July. There are endless fields of rape flowers on Zhaosu Grassland. Some sunflowers are hidden among them. The dark green grassland, golden fields, and snowy peaks may make you feel like you are walking in an oil painting.

All the banks and slopes of Guozi Valley (‘Fruit Valley’) are covered with wild apple trees, almonds, walnuts, and flowers. Cattle and sheep graze in the valley in summer, and herdsmen and yurts can be seen everywhere.

5) Hike on the Xiata Ancient Path

Xiata Ancient Path connects the north and south arms of the Tianshan Mountains and used to be an important trade road from Yili to Aksu in ancient times. The total length is 120 kilometers (72 miles).

It goes across the grasslands, through forests and a mountain range, and by glaciers and rushing rivers. Its beauty and high degree of difficulty attract many adventure lovers.

A recommended hiking route starts from ‘Flower Platform’. The round-trip hike is about 7 km (4 miles). With 8 km (5 miles) more you can visit a glacier.

Contact us to create a trip to Ili/Xinjiang based on your needs.

6) Explore Tekes Town — the Only City with No Traffic Lights

What makes Tekes Town special is that it was built in the shape of a bagua (an eight trigrams grid). It is the largest and most complete city with a bagua design in the world, and it is reputed to have very good fengshui.

It is the only city without traffic lights in the world. The octagonal web design makes all the town’s roads and streets well-connected with wide junctions, so no traffic lights are needed.

This is the most westernmost place where Taoist culture spreads in China. It is also the place where the largest ancient nomadic kingdom in the western region of China — the Wusun Kingdom — used to be centered.

The best times to visit Ili are from June to October when the scenery and weather are the best.

Surrounded by mountains on three sides, Ili has glaciers and abundant rain and snow. It is one of the regions with the most abundant rainfall in Xinjiang.

Autumn is short. The temperate drops significantly from late October. September is the season of the rich fruit harvest.

It snows in winter in Yili, with temperatures generally below freezing from December to February. Snowy Ili is quiet and receives few visitors in the winter low season.

Contact us to create a trip based on your needs.

How to Get to/around Ili

Xinjiang's transportation network is developing rapidly, but compared with other provinces and cities, it is not so convenient. Ili has one airport and one railway station in Yining.

Yining Airport has flights from Beijing, Xi’an, Korla, and Urumqi.

Other cities in Xinjiang have normal trains to Yining Railway Station, such as Shihezi, Horgos, Karamay, and Korla.

Taking a taxi or chartering a car is the main way to travel around Ili, and even Xinjiang, as most scenic spots are scattered in remote places that long-distance buses do not go to.

A private vehicle with your own private driver and guide would be ideal. You can stop where you want and enjoy flexibility and expert adaptability.

To ensure a comfortable hotel experience, booking 4- or 5-star hotels is better. In Yining, accommodation in the downtown area is best. Some hotels near scenic areas are also recommended.

If you want to do some shopping, you can go to Taxilaipukai Market, or go to the shopping malls in Jiefang Road.

As in the rest of Xinjiang, most people’s belief system is Islam. Respect their customs (e.g. no alcohol and modest dress) and follow your guide’s advice.

Tour Ili with Us

All our tours are customizable. Contact us to create a trip according to your group size, time, budget, interests, and other requirements. See our recommended Ili/Xinjiang tours for inspiration: