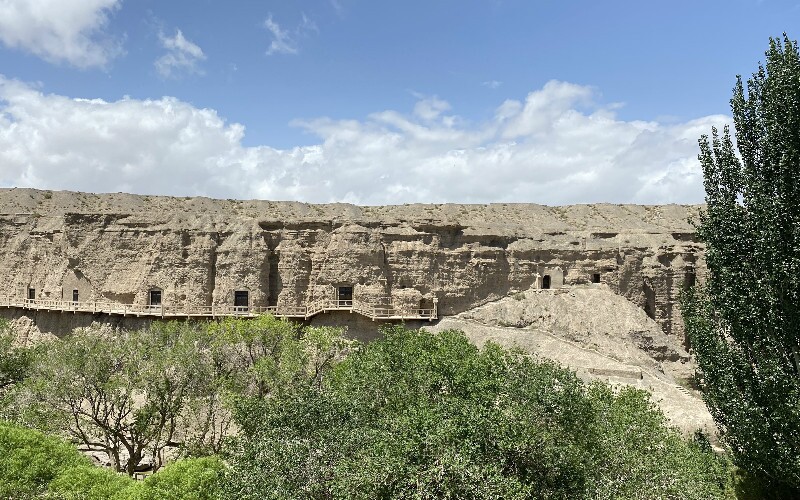 Commonly referred to as the Ten-Thousand Buddha Valley, the Yulin Grottoes are Buddhist grottoes, where the mural paintingsare very similar to those of the Mogao Grottoes, thus it’s a very good alternative if you unable to visit the Mogao Grottoes in Dunhuang. The Yulin Grottoes were listed on the first batch of the key cultural relics under state protection by China’s State Council in March 1961.

Highlights of the Yulin Grottoes

The Yulin Grottoes are highlighted by their delicate and colorful murals painted from various dynasties, whose content ranges from the figures of Buddha to the sutra stories to flowers and beasts. The 25th grotto (built in the Tang Dynasty) is the most representative one of its kind among the Yulin Grottoes, where the murals are vivid and colorful with eight figures of Bodhisattvas, such as Vairocana Buddha, Maitreya(the Laughing-Buddha) and Manjusri Bodhisattva painted on its front wall. A Sukhavativyuha Sutraanda Maitreya Sutra are painted onthe south and north walls of the Yulin Grottoes, and the scenes of life such as farming, feasting, visiting relatives and tonsuring are depictedin the Maitreya Sutra. In addition, the mighty heavenly kings, the lifelike lions and white elephantsare also painted on the walls of the grottoes.

The mural of Xuan Zang Going on a Pilgrimage for Buddhist Scriptures is painted in the29thgrotto. The mural of Kwan-yin Sitting on the Moon in Water is still retained in the 2ndgrotto, which depicts Kwan-yin (the Goddess of Mercy) sitting calmly on Luojia Mountain.The mural of the One-Thousand-Hands Kwan-yin is painted on the east wall of the 3rdgrotto, whichfully reflects the scientific development in ancient times owing to an advanced tool placed in each hand of Kwan-yin.