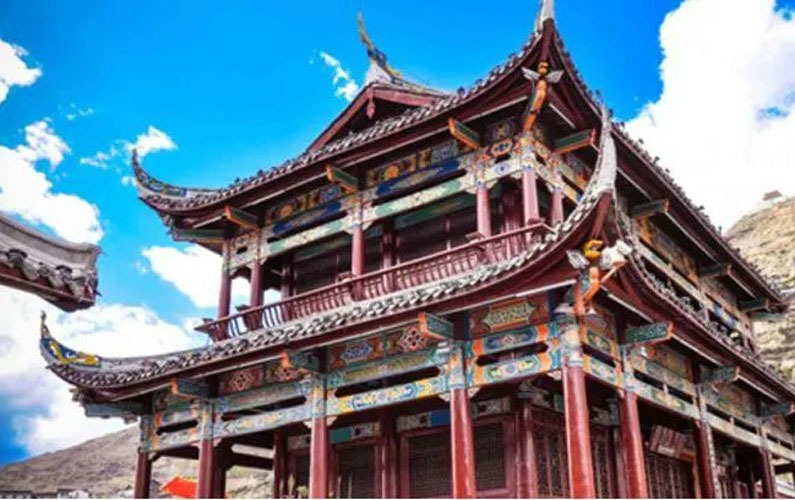 Songpan Ancient County is located in the northwest of Sichuan Province. It was an important frontier city, a vital strategic point, and an important economic center of northwestern Sichuan Province. At present, it is the cruising hub of Jiuzhaigou Valley, Huanglong, Hongyuan—Rouergai Grassland (若尔盖大草原) and other important scenic spots. Songpan Ancient County which always been called the “ancient city on plateau” is one of the State Protected Historic Sites.

Songpan County is also known as Datang Songzhou city. It was built in the Tang Dynasty (618–907) and was named after the towering pines in the city. Historical traces can be easily found in the present layout of city: the ancient city with blue city walls; the low buildings and the numerous lanes in the city; four broad main streets (East Street, West Street, South Street and North Street) orderly scattering in the city; ancient bridges with long history; the flowing rivers under the bridges; the tea houses and cane chairs near the river; the tall city gates and the green hills outside the city etc. Everything in the field of vision gives people a sense of going back to the ancient times.

Dating back to Ming Dynasty (1368–1644), the city wall of Songpan Ancient Town was made of blue bricks locally fired. It is extremely tough, and 10 meters (33 ft) high, 30 meters (98 ft) wide and 6,200 meters (4 miles) long. The wall is one of the best ancient city wall relics in China. The tops of the East City Gate, the South City Gate and the North City Gate are all half-moon-shaped. The cornerstones of the gatehouses are enchased with unique anaglyphs and they still keep their ancient style and beauty now.

There are seven gates in Songpan Ancient Town. The East Gate is called Jinyang Gate (觐阳), the South Yanxun Gate (延熏), the West Weiyuan Gate (威远) and the North Zhenqiang Gate (镇羌). The gate that faces the southwest piedmont is named Small West Gate (小西门). There are still two gates in the outer city. The one that sits in the east side and faces the west is called Linjiang Gate (临江) and the other that sits in the south side and faces the north is called Fuqing Gate (阜清). Every city gate is decorated with an arch, made of huge hexahedron stones, bar-shaped and paralleled. Besides this hemicycle roof, there are all kinds of anaglyphs enchased in the cornerstones. They are all unique and enjoyable. The stone wall that stands on the bank of the river is carved with the notice of tax reduction and exemption in 1644, which is the 16th year of Empire Chong Zhen (1611–1644) of the Ming Dynasty (1368–1644).

The gatehouse of the ancient city wall was first built in the 12th year of the reign title Hongwu (when the first Emperor of the Ming Dynasty, Zhu Yuanzhang (朱元璋) was in power) or 1379, and the same time for the combination of the Songzhou Wei (松州卫in Chinese, Wei is another name for county in ancient times) and Panzhou Wei (潘州卫) into Song pan Wei. The arch of the gate is 50 meters (164 ft) deep. It is so well-built that either wind or rain has not eroded or broken it after all these centuries. Tourists can enjoy a full sight of view of the surroundings on the top of the city wall.

Songpan Ancient Town is large in scale and magnificent in style. Its length, height, thickness and the exquisite anaglyphs and stone inscription are the best among all their kind.

Standing at the entrance of the Songpan Ancient Town is the landmark statue of Princess Wencheng and the Tubo King Songtsen Gampo. It tells a story of more than a thousand years ago. There used to be a war between the Tang Dynasty (618–907) and the Tubo Dynasty there. At that time the Tubo King Songtsen Gampo sent an envoy in the mission of proposing a marriage to Chang’an (named Xi’an now) City, capital of the Tang Dynasty. But the envoy was detained by Xu Qi, the governor of Songzhou Prefecture (Songpan County), when passed by the prefecture. Songtsen Gampo was so furious that he led a troop of 200,000 soldiers to intrude Songzhou Prefecture. Area Commander of the prefecture Han Wei failed the war. Later Emperor Taizong (599–649) of Tang Dynasty dispatched the head of the Ministry of Official Personnel Affairs Hou Jun to Songzhou Prefecture with more soldiers. After the war in Chunzhu Temple, Songtsen Gampo was defeated and retreated to Tibet. Then Gampo resent an envoy to re-establish the relationship with Tang Dynasty by intermarriage, with some gold as a gift. Emperor Taizong of Tang Dynasty took the proposal and married his daughter Princess Wencheng to Gampo. Their marriage became a famous romance.

The time-honored Choubian Building, Chenghuang Temple, Dabei Temple and the Mosque all witness the long history and the rich historical culture of Songzhou Ancient Town. In the town live the ethnic groups of Tibetan, Qiang, Hui and Han. Different ethnic groups influence each other and connect together, forming unique ethnic customs and rich local characteristics. The Yiqing Plaza (逸情广场), Songzhou Plaza (松州广场), Da Tang Songzhou Plaza (大唐松州广场) and Guyun Plaza (古韵广场) are different from each other with their own attractions. Enjoying a Tibetan song or dancing the Guozhuang dance will give the tourists a closer encounter with the rich ethnic customs.

Because of the complex terrain and great disparity in elevation, the climate in Songpan differs according to different areas. In general, Songpan has a temperate plateau and sub-frigid monsoon climate. It is humid and cold there. The winter is long and the summer is extremely short. So the spring and autumn is closely linked. The average temperature for a year is 7℃ (45 F). The sunshine time is sufficient, and fog frequently occurs in the morning and night. Over 90% of the rain for a year concentrates in the period from May to August. It has four distinct seasons and great difference in temperature between day and night. Tourists should take more kinds of clothes during the trip in Songpan. From April to October is the best period to travel there. October is believed to be the best month for visiting Songpan.

Songpan Town is small. The main transportation is the human tricycles. The price is 1–2 yuan, 3 Yuan for some long distances. For renting cars, minibus is the recommended choice. Reference quote: it costs 200 yuan to Huanglong Scenic Area or Jiuzhaigou Valley; 150–200 yuan to Muny Valley.

Besides, visitors can go to Chuanzhu Temple (川主寺) by carpool. There are many tourists sharing the costs of renting cars to Jiuzhaigou Valley or Huanglong Scenic Area. It costs 50 yuan per person. It depends on whether you can have enough people to share the costs. In general, a visitor has to wait for another three people to share one car.

For those people who want to visit the Muny Valley, Xuebao Ding (雪宝顶), they can choose the special transportation—riding horses. There are many routes for choices. Tourists can also customize routines. The price is 100–150 yuan for the first day and 100 yuan per day thereafter.

Tourists can take buses at the Chadianzi Bus Station (茶店子车站) in Chengdu. The course is around 400 kilometers (249 miles), passing Dujiang Dams, Wen Chuan County, Maoxian County and Songpan County. The ticket is around 98 yuan. The bus starts at 7:00 a.m. and arrives at Songpan at 3 p.m. It will stop at the Maoxian County for lunch. It is better for tourists to book the ticket in advance. For renting cars, it costs around 700–800 yuan for one way.

There is a shuttle bus from Jiuzhaigou Valley to Songpan County. It starts at 7:20 a.m. with the ticket price is 270 yuan. The course is about 120 kilometers (75 miles) long.

Besides, tourists can also choose the Chuanlang Road (Chuanzhu Temple–Ruoer). The Chuanlang Road starts at the Langmu Temple (the juncture part of Sichuan and Gansu Province), Ruoergai County and ends at Chuanzhu Temple county in Songpan. It is connected to the Jiuhuan Road (九环公路, literally means ‘Nine Rings Road’). It is around 225 kilometers (140 miles) long and passes Langmu Temple, the pass of Rierlang Hill, Wanmu Grassland, Ruoergai County and Galitai Grassland.

Most Residents in Songpan County are Tibetan people. The food served there are roasted qingke barley flour (青稞糌粑), cheese and red meat. For drinks, there are tea with milk, buttered tea and yogurt. Guests will be served with boiled lamb and blood sausage in Tibetan families. The yak jerk is the most popular specialty in Songpan. See more local cuisine in Sichuan.

Alibaba roast mutton is another recommended restaurant. After entering the ancient city gate (the one with the sculpture of Princess Wencheng and Srongtsen Gampo), the seventh building on the left is the Alibaba restaurant.