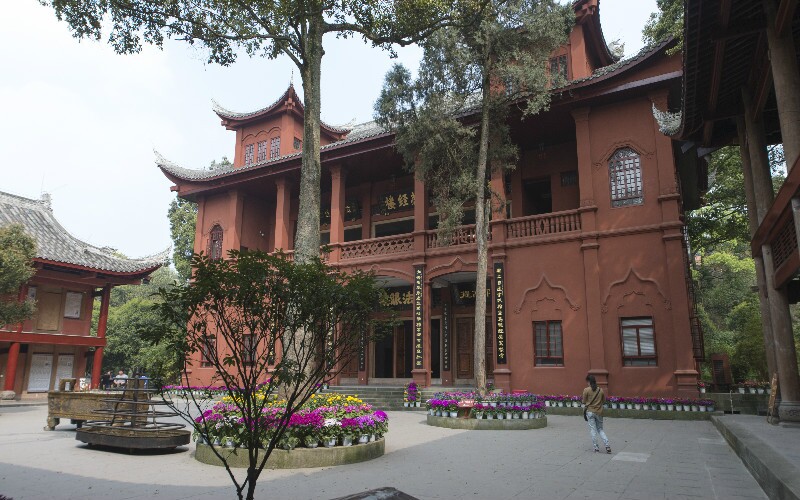 Lingyun Mountain in Leshan, Sichuan Province is famous for carved-in gigantic statue of Buddha and for the Lingyun Temple that sits on the mountain. Here is one of the most famous Buddhist religious sites in the world that has commanded the interest of tourists for many years. The natural wonders and man-made cultural artifacts unite to create a pleasant and highly interesting scene.

The History and Cultural Significance of Lingyun Mountain

Lingyun Mountain (Lingyun Shan) has been a Buddhist shrine since the Tang Dynasty. Over the years, numerous monasteries have been built at the site. On the hill here is a relatively new temple complex affording excellent views of Dafo and containing hundreds of statues.

Oriental Buddha Park (Dongfang Fodu) holds more than 3000 Buddhist statues, including a 170 meter-long reclining Buddha, the largest in the world. The Mahaoya Tomb Mausoleum (Mahaoyamu Museum) is also located on the mountain. This is a Han Dynasty building containing tombs and other burial artifacts from that period.

Oriental Buddha Park encompasses Leshan Giant Buddha Scenic Spot, over 3,000 other statues of Buddha, and the Han Dynasty Cliff Tombs Museum. The giant Buddha carved into the side of Lingyun mountain is the world's largest Buddha statue at 170 m (558 ft). The name Lingyun was ascribed to the mountain due to the presence of the Lingyun Temple, but it was earlier called by one of two alternate names: Qingyi Mountain or Nine Peak Mountain.

The idea for the rock carving came to the monk Hai Tong in the early 8th Century A.D., and he spent 20 years begging for the project's funding. Upon finally collecting it, local government officials attempted to lure the money away from him, and he said he would rather lose his eye than the Buddha money and proceeded to prove it by ripping his eye our of its socket. That ended the attempt to rob him of his money and sent the officials running away screaming. It then took 90 years for a crew of skilled stone carvers to sculpt the work, and some ingenious drainage techniques have made it last.

This site has for centuries been a religious pilgrimage site and many monasteries have been built near it. This particular Buddha statue is of Maitreya (a Bodhisattva) and was built to end frequent shipwrecks in the turbulent river waters that it overlooks by scaring the river spirit into submission. The Lingyun location has been long and often commemorated in literature, song, and poetry.

How to Get There and When to Visit

Leshan is located approximately 137 km (82 mi) south of Chengdu, the capital of the south-central Chinese province of Sichuan. It sits near the juncture of three rivers, and just east of town at the very place those rivers meet one finds the Lingyun Mountain Buddha. It is easy to take a bus from Chengdu, though the trip will take about 1½ hours, and then to take a taxi to the scenic site or to go on foot.

The best times to visit are in the spring and fall since the Summer will see the monsoons (July and August especially) and the winter is a tad bit chilly. All year round, however, the tourists come because of the general mildness of the climate.

Other Sites Worth Seeing In or Near Leshan

Besides the jungle-covered Lingyun Mountain area, visitors may wish to see Leshan Bridge, Leshan Taoist Temple, Wuyou Temple, and the Mt. Emei Scenic Area southwest of Leshan which is among the four most sacred mountains of all Buddhism.

From the Giant Buddha at Lingyun Mountain one can see a naturally formed Giant Sleeping Buddha with its head "resting" on nearby Wuyou Mountain. If one travels to that site, he or she will be able to visit the many pavilions there and the man-made statue of Buddha that is placed on top of the natural formation.

Finally, a great activity while in Leshan is to visit the Leshan Tea Plantation along the road to Chengdu. By the roadside is a tea station and behind it lies the plantation itself. During the Spring, you can tour the tea farm and watch the harvest.

China Highlights can help you customize a tour to visit Lingyun Mountain and other highlights in Leshan .