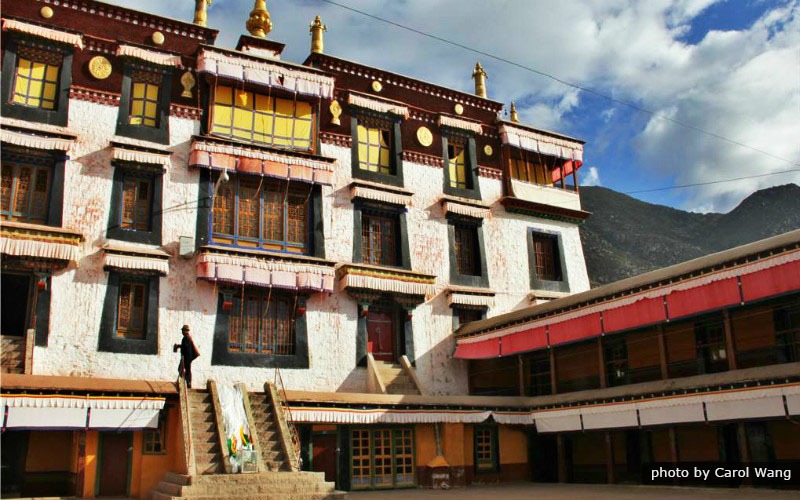 Drepung Monastery is the first of the three principal monasteries of the Gelugpa School of Buddhism. It is also the largest Tibetan Buddhist monastery. Drepung Monastery used to be the living quarters of the Dalai Lamas before the reconstruction of the Potala Palace.

Drepung Monastery is surrounded by the dark faces of mountains so that its grand white buildings stand out, shining in the sunlight. Most monasteries in Tibet look this way.

Thangka unveiling at the Shoton Festival

One of the highlights of Drepung Monastery is the thangka unveiling at the Shoton Festival, usually in August. The big thangka is unveiled under the sun on the mountainside near Drepung Monastery.

On the first day of the Shoton Festival, one of the most important festivals in Tibet, Drepung Monastery attracts many Tibetans to worship the big Buddha on the unveiled thangka. The thangka is about 20 meters wide and 30 meters long.

On this day, people get up early and gather in front of the stairs on the hillside. It is the busiest day around the monastery with crowded people and heavy traffic.

Before the sun rises, the huge thangka is taken from Drepung Monastery and extended up the mountainside. Tibetans pray under the thangka and circle it in a long queue.

This activity attracts travelers from both home and abroad. The best place to take a photo of the giant Buddha thangka is from the opposite mountain.

Cuoqin Hall is the largest hall of Drepung Monastery. There are 183 pillars in the hall with beautiful decorations on them. The monks wear red robes and sit in an orderly fashion.

According to religious records, during the foundation of Drepung, Tsongkhapa, the founder of Gelugpa Buddhism, discovered a magical white conch shell with counter clockwise swirls, believed to be buried by the Buddha Sakyamuni. Tsong Khapa bestowed this religious treasure to Drepung, and it can still be seen today in the Great Sutra Chanting Hall.

Monks are chanting in Cuoqin Hall

In the morning, the monks will gather there to chant. It is quite dark inside and many candles are lit to create a unique environment. There are lots of small rooms around the hall in each of which sits a Buddha statue. Do not point at the Buddha statues.

When you enter the hall, take off your hat and be quiet, and do remember to walk in a clockwise direction. This is out of respect to the Tibetan culture, and it is their way to pray.

Many halls are closed in the afternoon, therefore, it is recommended to arrange the tour by visiting Drepung Monastery in the morning and watching the debating in the afternoon.

After chanting inside the hall, the monks will gather outside in the shade of the trees and start their debate in the afternoon. Debating is a normal activity, similar to having lessons in a class. They also have regular tests by debating.

The debating is usually on a one-to-one basis, conducted in the Tibetan language. The monks act in an exaggerated manner and speak loudly.

Respect the pilgrims and monks. Do not take close-up shots of them without their permission.