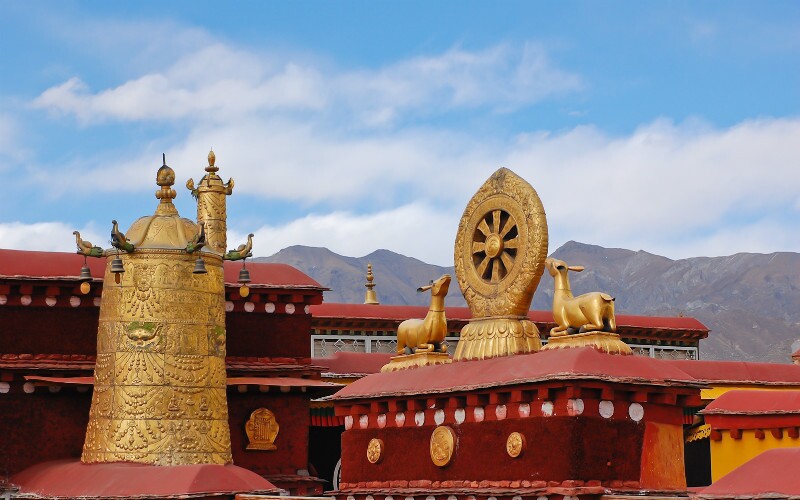 Jokhang Temple is a Tibetan Buddhist temple located in the center of old Lhasa city. It was originally built in 647 AD. The name “Jokhang” means “House of Buddha”.

Jokhang Temple is the spiritual center of Tibet and is one of the holiest destinations for Buddhist pilgrims. During the day and night, lots of pilgrims pray in front of the temple.

Things to Do in Jokhang Temple

The roof of the temple offers splendid views of the Barkhor (pilgrims' circuit) and the Potala Palace. The golden roofs are superbly crafted with many birds, beasts, bells, and other intricate figures.

In the central hall is the Jokhang's oldest and most precious object, a life-sized sitting statue of Sakyamuni when he was 12 years old. This was carried to Tibet by Princess Wen Cheng from her home in Chang'an in 700 A.D.

It is a gilded statue adorned with many jewels, in an elaborate setting. Pilgrims have prostrated themselves in front of this statue for centuries. It is the most sacred statue in the eyes of the Tibetan people.

3. See the Carvings from the 7th Century

Jokhang Temple still retains sandalwood doorframes with exquisite carvings, which were created in the 7th century. In front of Sakyamuni Hall, there are also eight wooden pillars carved with beautiful patterns.

4. Learn about the History of Jokhang Temple from Its Murals

Jokhang Temple has Tibetan murals stretching for nearly 1 kilometer in length, which show the princess of the Tang Dynasty marrying the king of Tibet, as well as the story of Jokhang Temple's construction.

Local people believe that a religious clockwise walk around Jokhang Temple brings them blessings from Sakyamuni. If you are interested in Buddhist culture, you are advised to do this yourself.

Palden Lhamo is believed to be the goddess of protection for women and children. Every year on the 15th day of the 10th lunar month in the Tibetan calendar, a lively celebration is held in and around Jokhang Temple to worship the goddess. In 2020, the festival will be held on November 30th.

On this day, the statue of Palden Lhamo is taken out of Jokhang Temple and is carried in a parade around it. This is also “Women's Day” in Tibet. Local women dress up and pray to the goddess for good luck.

The History of Jokhang Temple's Construction

Jokhang Temple was first built in the 7th century when Tibet was ruled by a wise and able king called Songtsen Gampo. The site of Jokhang Temple was chosen by his wife, Princess Wencheng from the Tang Dynasty in Central China.

The princess perceived a lake in the Tibetan kingdom to be a "devil's heart" and had it filled in, then the temple was built on the site to counteract the evil forces.

The temple took 3 years to build. It was originally called “Resa”. In the Tibetan language, “re” means “the goats” and “sa” means “the earth”. The temple was named this to show gratitude to the goats who carried all the materials used to build the temple.

In the following centuries, more Buddhist halls and pagodas were built there to make the temple larger and larger. Around the 15th century, the temple got its current name of “Jokhang”, referring to the great prayer meetings hosted in the temple.

If you are planning to travel to Tibet, see our most popular tours for inspiration.

Or contact us to customize your own unique tour according to your requirements. For more Jokhang Temple tour please see Tibet tours.