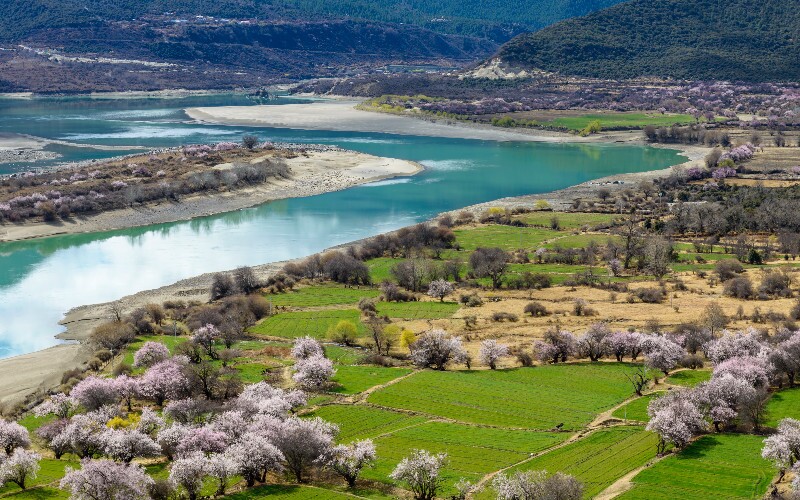 First Bend of the Yangtze River

2. Visit the Naxi town of Shiguzhen and shop.

4. Hike around and go on the river in boats.

5. Visit the memorial and see the stone monument that is about 450 years old.

A scenic and hiking area near Lijiang is the First Bend of the Yangtze River. It is only about 50 kilometers or 30 miles away from Lijiang. It is called the “first bend” because the river makes a 90 degree turn from south to east within a distance of 1 kilometer. The place was important militarily because big armies crossed the river at that point, and it was a place where Tibetans came down to trade with the people living in the area. It is an interesting scenic area, and there is hiking and other outdoor activities in the area.

Most people go to the river bend on the way to Tiger Leaping Gorge. The scenery is interesting. The town of Shiguzhen (石鼓镇) is at the bend, and there is a market area where people come to buy and sell goods. The land around the river is passable on foot, but mountains block the region south and north of it, so it was an important route for armies marching through the region. It is said that Zhuge Liang (220-280) who was a famous strategist crossed here with his army. The great Mongolian emperor Kublai Khan’s army crossed at this point in the 13th century to attack Dali. In 1936, the Chinese Red Army crossed here during their long march, and there is a Red Army Memorial Hall in Shiguzhen. Besides shopping and visiting the memorial, there is some hiking in the area, and you can ride on boats.

Stone Drum Town is at the First Bend of Yangtze River.

Imagine walking along paths where Kublai Khan’s troops walked 800 years ago! The terrain is sort of rocky and rough and is like a desert, but you can walk on the hills. There are beautiful white sand bars in the river. The area along the banks is cultivated. There is a side canyon that meets the river at the bend. You can also see the Naxi town of Shiguzhen.

The topography in the area made the bend commercially and militarily important. Mountain people came down to trade for tea and other products. The Chama Road that is also called the Southern Silk Road went up from Dali to Shaxi, and a branch went from the Naxi town of Shaxi to the bend of the river. A Naxi market town called Shigu was built here.

The town was named after a stone monument that is 1.5 meters wide and about half a meter thick (about 2 feet thick). It is sort of shaped like a drum. The plaque was made in the middle of the 1500s to commemorate a Naxi victory over Tibetans. The plaque now has a crack.

In April of 1936, the Second Route of the Red Army that was led by General He Long and Ren Bishi crossed the river here and continued to march north.

Approximately 50 kilometers or 30 miles directly west of the Ancient City District of Lijiang on Highway S226. The town of Shiguzhen (石鼓镇) is at the bend.

1. Walk in the scenic areas.
2. Hike in the area.
3. Shop.
4. Relax in a Naxi restaurant and have traditional food.
5. Learn about the history of the region.
6. Go boating.
7. There is good hiking in the Tiger Leaping Gorge.

To experience more of the ancient traditions and culture of the Naxi people, you can go to Lijiang or go to higher elevation Naxi villages. Lugu Lake is the homeland of the Mosuo people who are related to the Naxi but are more primitive. The hiking around Lugu Lake is in high elevation forests, and part of the reason the valley is interesting is that the people are so primitive. The High Trail of Tiger Leaping Gorge is a good hiking trail with comfortable inns all along it and spectacular views of one of the deepest gorges on earth. The High Trail goes the whole distance of the gorge.

The Naxi have an interesting hieroglyphic writing system. It is the world’s last surviving hieroglyphic writing system. To the south of the Naxi region live the Bai people around the Dali valley and the valley of Shaxi. The Bai are also related to the Naxi and Mosuo. More than a thousand years ago, the powerful empire of the Nanzhao left behind cave grottoes and temple sites in Shaxi and a tall pagoda in the Ancient City of Dali. The pagoda is among the best preserved from that era in China. The ancient Chama or Southern Silk Road trading town sites in both Shaxi and Lijiang are UNESCO World Heritage sites.