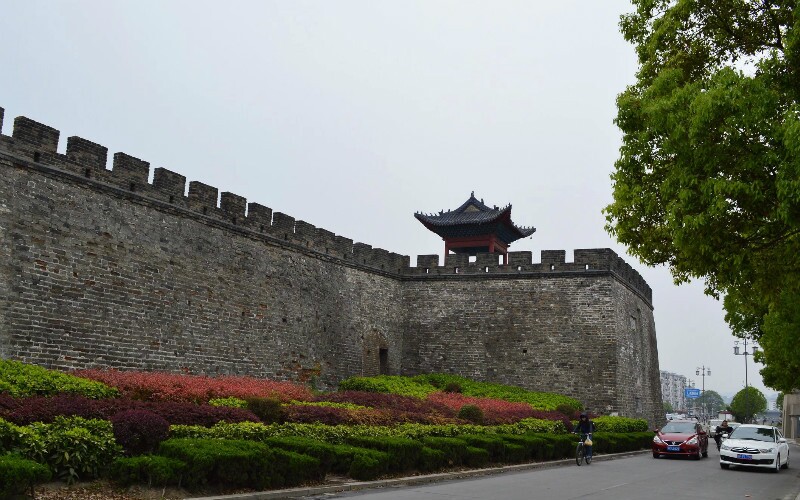 Xiangshan Film and TV City is situated in the scenic ecotourism area of Datang Port in Xiangshan County of Zhejiang Province. It wonderfully combines the local mountains, rocks, caves, water, forests and other natural landscapes.

It covers an area of 1,091 mu, and mainly consists of the five sight spots of gate plaza area, village street and workshop area, tomb and cave area, manor, lake and pond area, and shop and city residential area.

It displays the ancient architecture art of the Song Dynasty, and integrates film & TV culture and tourism & leisure. It has the biggest individual building among all film and TV cities in China. In 2006, it was ranked as one of the "China's Top Ten Film and TV Bases".

With its unique design of numerous buildings, it can provide appropriate scenes for film and TV themes of different historical periods, as remote as the Spring and Autumn Period, the Qin and the Han , the Tang and Song periods, and as recent as theMing and Qing periods.

Sights in the City

After entering the north gate of Xiangshan Film and TV City, the first thing that catches your eyes is a majestic city wall, which is 400m long, 10m high, and 6m wide, with two distinctively different city gates. This is the well-known Xiangyang City Wall.

Among the two gates, the right one over the river is a lounge bridge type water fence gate with southern features. Tourists can go into the city directly from this gate by boat.

The left one is a standard big gate tower of the Song Dynasty. In front of it, there is a moat. The drawbridge has to be laid down, so that people can enter the city from here.

Behind the big left gate, it is a 120m long main street. In the middle of it, two south and north streets are linked together, forming a crossing, which is the central area of this city, where main merchants cluster together.

All the buildings in the central area have distinctive characteristics, including restaurants, tea houses, drug shops, mercerizes and so on.

About 100m south of the crossing, it is the Nanxi Bridge area where the populace inhabits. Along the street, there are inns, stores, restaurants, etc..

In the alleyways, there are residential houses built in accordance with the Song Dynasty pattern and with combination of features of folk houses in Zhejiang, Anhui, Fujian and other regions. All of these give a kind of charm of southern water towns to this place.

At the entrance of the Passionless Valley, tourists can see the largest banyan forest of the country, but it is artificial. It is made of reinforced concrete frames, and shaped by cement and lime sand. Such superior craftsmanship is rarely seen in China.

Taking a closer look at these trees, you can see roots twisting together, branches and twigs crossing each other, leafy crowns stretching out, and white-and-green trunks. On the trunks, the green parts consist of lichen, moss and other parasitic plants, just like these trees wear elegant and well-fitting green dresses.

Looking into the distance, you can see ingenious and skillful rocks and peculiar mountains and caves on the other side of the river, which echo with the ancient forest. You also can see marvelous peaks surrounding the forest.

When you walk out of the forest, you can see the Gongsun Mansion, which is composed of six independent buildings, including the hall, study, library, pills refining chamber, sword store, and fasting room.

It is surrounded by the lake on three sides, and possesses the natural simplicity of ancient villages and the rural pastoral scenery.

City of the Spring and Autumn and the Warring States Periods

This city lies in the east of Xiangshan Film and TV City, covering an area of 152 mu, with an construction area of 43,000 ㎡.

The completion of the construction of this city is an important complement to the ecotourism area combining film and TV culture and leisure of Datang Port in Xiangshan County.

By far, it is the film and television shooting base that has the most completed and excellent facilities among those which set the Spring and Autumn and the Warring States periods as a background.

The city is full of charm of the Qin and Han periods. It is made up of the city wall, city towers, mansions, barracks, streets, plazas, housing of poor people, and other buildings.

These buildings are exquisite, perfect, majestic, and have distinguished features.

Paradise of the Journey to the West

This scenic spot includes the Water Curtain Cave of the Mountain of Flowers and Fruits, Immortality Peach Garden, virgin forest, nether world, and other scenes. It covers a total area of 90 mu, with an construction area of 5,823 ㎡.

Water moves fast in front of the Water Curtain Cave, which is 60m wide, even more than 30m wider than the famous Huangguoshu Waterfalls that is known as the "First Waterfalls in China" and the third biggest waterfalls in the world, after the Niagara Falls and Victoria Falls.

The rocks here are duplicates of real stones, which are made by assembling plates that are cast with glass fiber reinforced plastics. There are more than 10 kinds of plants around here, including palm, but they are all high simulation plants.

The Immortality Peach Garden is built in 2009. The surround of this garden is made of dark red granite, forming something like disk, on which there are 7 giant peach trees, each of which is 10m high.

There are immortality peaches on these trees, and the biggest one of them is as big as a basketball.