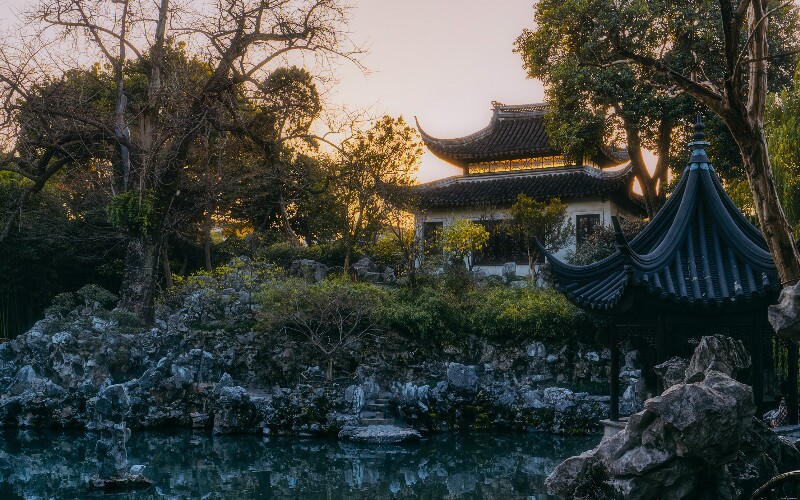 This rock garden was inscribed in the UNESCO World Heritage List in the year 2000. It is one of 9 Classical Gardens of Suzhou on the UNESCO list. It has the reputation of being the funnest garden in Suzhou because there is a complex maze people get lost in. UNESCO considered the 9 gardens in Suzhou to be masterpieces of Classical Chinese-style gardens.

The total garden covers an area of about of about 10,000 square meters or two and a half acres. The large multi-story rock maze rises to 7 meters or about 23 feet and has numerous openings and routes. People like to watch others try to find their way out. There is a two story pavilion in the garden that gives a good view point of not only the people wandering around in the maze but also the many lion-like silhouettes that play on the mind's eye. It is said that Emperor Qianlong liked sitting in the pavilion a lot. There are traditional buildings and a pond garden in the small garden area. But better than the pond and the buildings, the best feature of the garden is the amusement and exercise of traversing the maze.

This garden is the most fun of all of the gardens on the World Heritage list, though it is one of the smaller gardens on the list. It has an artificial labyrinth with many levels, caves and peaks. It has many stairs, and some of them were hard to find. You might find yourself laughing hard. You can engage in races. See who gets out first! Check out a bit of calligraphy about the pavilion that was left by the Emperor Qianlong of the Qing Empire.

Other buildings in the garden are Standing-in-Snow Hall (Lixuetang); the Pavilion for Greeting; and the Plum Blossoms Pavilion (Wenmeige) where painters and poets composed. In addition to the plum trees around this pavilion, furniture and fixtures are decorated with plum blossom ornamentation. You can also see some artwork of Ni Yunlin and Xu Ben. Lion Grove Garden (狮子林园; ShīZǐLínYuán) was built about 1342 on the site of a garden that was destroyed centuries earlier. The Northern Song Dynasty poet named Su Sunqin ordered the Canglang Pavilion to be built in the place of the destroyed garden in the early 11th century. The present rock garden around it was partly built in 1342 during the Yuan Dynasty (1279-1368) by a monk named Tianru and a group of Zen Buddhist disciples.

In 1589 of the Ming Dynasty (1368-1644), Monk Mingxing asked for donations to rebuild the garden. Then Huang Xingzu, the governor of Hengzhou, bought the garden and renamed it She Garden. His son named Huang Xi repaired and decorated the garden and named it Five-Pine Garden in 1771.

The garden was purchased by the Bei family in 1917. The family finished restoring it in 1926. Then the government of the People's Republic of China took control of the garden and developed it as a park. It was opened to the public in 1954.

In the year 2000, the UNESCO World Heritage List committee decided to include this property among earlier entrants of its Suzhou classical garden list. They wrote that the classical gardens of Suzhou are "masterpieces of Chinese landscape garden design in which art, nature, and ideas are integrated perfectly to create ensembles of great beauty and peaceful harmony."

A quarter of the total area of the park is occupied by the central pond, and around it are several gardens. The East Garden is dominated by a dramatically realistic miniature mountain of yellow stone that rises flanked by several Ming-style buildings. The style of the West Garden is more subdued. It has artificial limestone hills.

Yuan Long built the Retreat and Reflection Garden Yuan Long in 1885-87. Its buildings are linked with the garden proper to the east by a boat-shaped house. The Celestial Bridge is striking.

China Highlights can help you customize a tour to Suzhou, with a visit to some of its ancient gardens. or just see our Suzhou tours.

While in the Lion Grove Garden, you can see the many buildings near the pond and a zig-zagging bridge that crosses it. You can visit Suzhou Folk Custom Museum that is next to it at the same time. Another garden on the UNESCO World Heritage List called the Humble Administrator's Garden is nearby.

The Humble Administrator's Garden is southwards about one hundred meters. It is said the garden area was the site of the residence of Suzhou's powerful people since the 2nd century AD. The Ming Imperial Inspector Wang Xianchen built the complex in 1509 when he retired from his position of power and returned to his native city.

Address: located at 23 Yuanlin Road, Suzhou City, Jiangsu Province. 平江区园林路23号. You can show the address to a driver.

Depending on when you go, there may be crowds of people traversing the maze and long lines to the buildings. It is a very popular site.