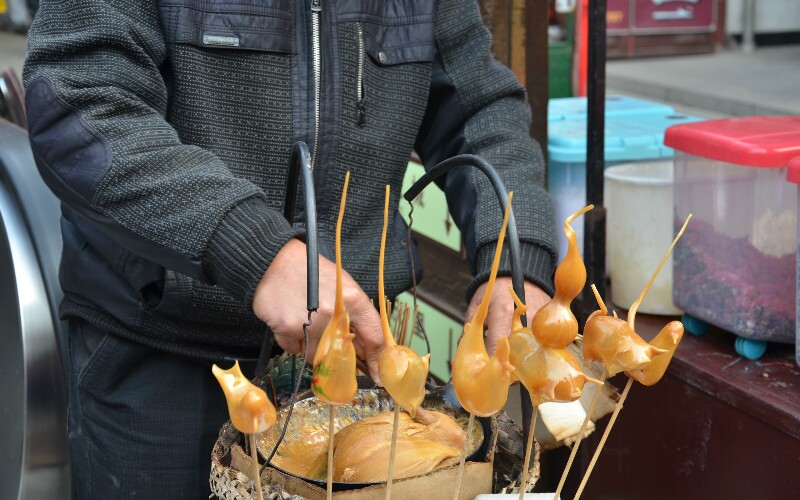 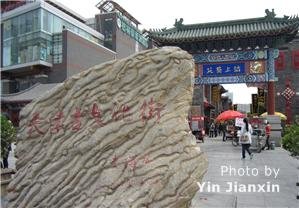 Located on the west bank of the Hai River, in the north-eastern corner of Nankai District, Tianjin Ancient Culture Street is a commercial pedestrian street. In ancient times, this was the place where people worshipped the Goddess of the Sea and boatmen had happy get-togethers.

Tianjin Ancient Culture Street is a street consisting of small booths or shops which are modeled after the small folk shops from the Qing Dynasty. There are about 100 shops in the street. All of them have Qing-styled architecture. Colored pictures decorate the doors or windows. These pictures are mainly concerned with history, mythology, figures, birds and flowers. They are openwork, relief sculptures or circular engravings.

The street mainly specializes in three kinds of commodities. The first are cultural relics, antiques and old furniture, such as the Four Treasures of Study, old books, traditional New Year paintings and jade jewelry. The second are traditional folk commodities, such as baby dolls, painted clay sculptures of Clay Figure Zhang, Yang Liuqing New Year Paintings with over 300 years of history, Tianjin Wei Kites, brick carvings of Zhuanke Liu, diabolos of Xiuzhu Room, porcelain from Jingdezhen and embroidery from Suzhou. The third are restaurants, tea houses and entertainment venues. Local dramas and folk art forms are often performed on an open-air stage or in the square in front of Tianhou Palace.

Except for those particular shops in Tianjin Ancient Culture Street, there are a lot of small booths along the street. Tomatoes on sticks, roasted sweet potatoes, cakes and desserts are all sold in these small booths.

Huanghui Fair in Tianjin Ancient Culture Street is also a famous traditional activity in Tianjin. In the beginning, the Huanghui Fair was called "Niangniang Fair". Legend states that the birthday of the Goddess of the Sea in Tianhou Palace falls on 23rd March. Since the years of Emperor Kangxi of the Qing Dynasty, people have held an annual Huanghui Fair for four days before the birthday of the Goddess of the Sea. All kinds of performances are shown along the street during the Huanghui Fair, which is such a spectacular event.

At present, the grand Huanghui Fair is held there on 23rd March of the lunar calendar every year. During the fair, you will see performances of the dragon lanterns, lion dances, Shaolin martial arts, stilt walking, Dharma Drums, land boats, yangko (a popular rural folk dance), martial arts, the Peking opera, the local opera, and Pang-tzu. The traditional shows are performed in the square in front of Tianhou Palace or Gongbei Avenue in the north and Gongnan Avenue in the south.

In the past dynasties, Tianhou was honored as the Goddess of Navigation Safety. It is said that Tianhou is called Linmo 林默 who comes from Putian, Fujian Province. She often sails on the sea and saves people who have difficulties at sea. Therefore, she is still worshiped as a goddess by people. During the Yuan Dynasty, large quantities of food were shipped to the capital of the country. Firstly the foods were shipped to Tianjin by sea routes, and then the food was shipped to the capital of the country by river transport. The government of Yuan honored the Goddess of Navigation Safety as the queen in order to pray for navigation safety. Thus, a Tianhou Palace was established in many coastal towns.

Today, Tianhou Palace has become a folk custom museum in Tianjin, which introduces the historic changes of Tianjin to others. All kinds of folk articles are on display in Tianhou Palace.

tianjin Tianjin Travel Guide - How to Plan a Trip to Tianjin

tianjin Top Free Things to Do in Tianjin