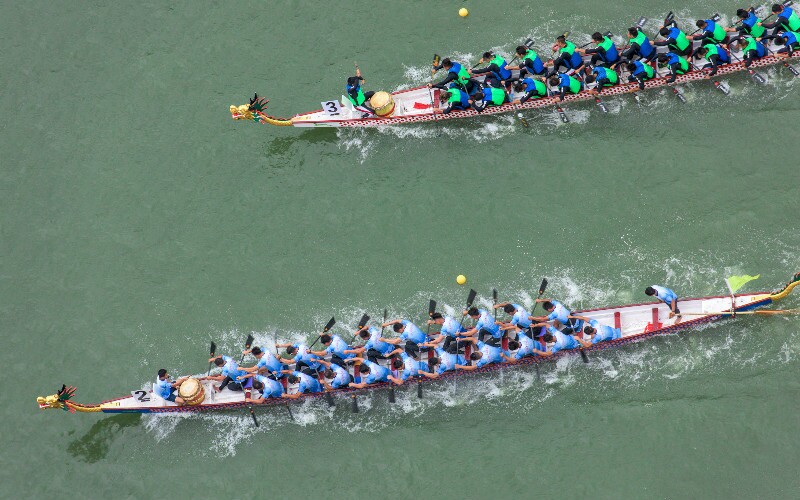 The dragon is an important symbol, not only in China but throughout the world. In China, dragons are associated with wealth, power, and leadership. Think you know everything about these mythical creatures? Here are 10 facts on Chinese dragons to get you excited for your journey to China — the land of legends!

Almost 2000 years ago, the philosopher Wang Fu described the dragon as being a combination of several animals.

We often think of a snake-like creature as the image of a Chinese dragon. But keep your eyes peeled as you explore China and you might spot dragon depictions that are more like turtles and fish!

Dragons are said to control the  weather.

Dragons represent both good and evil, meaning sometimes the blame for natural disasters falls on their scaley snouts.

They have been considered responsible for tidal waves, floods, and harsh storms.

Today, you can visit temples that were built to honor the dragons and protect China's agriculture.

Qinglong Temple, also known as Green Dragon Temple, is close to the city of Xi'an. Another such temple is Longquan Temple (Dragon Spring Temple), 12 km from Kunming.

3. Emperors were believed to be descended from dragons.

Dragon embroidery on a robe in Shanghai Museum

Fu Xi was a legendary folk hero credited with creating the first humans. He was described as having the head of a man and the body of a dragon.

He is considered one of the first three sovereigns at the beginning of the Chinese dynastic period (c. 2000 BCE).

4. Dragons are born in China every 12 years.

Dragon children are highly wished for in China.

The Chinese Zodiac is made up of twelve different creatures with corresponding personality features.

Chinese families will often try to plan pregnancies so that children will be born in the year of the Dragon.

This auspicious year said to be the birth year of leaders and influencers. The last dragon children to be born were in 2012 and the next will happen in 2024.

5. In China, dragons paddle and dance at festivals.

The heads of dragons are painted in bright colors

During Dragon Boat Festival, dragon decorated boats race through the waters in many Chinese cities.

The boats have carved dragon heads and long tails, and can be long enough to carry 20 paddlers.

At Chinese New Year people can witness a dragon dance. A team of "dancers" manipulates a cloth and wood puppet of a dragon.

The dance is accompanied by music, drama, and drums. It is believed that loud noises and an aggressive dance can ward off evil spirits.

It was said that there are nine dragon sons, charged with specific traits to protect homes and belongings.

Today, you can see these nine sons featured prominently throughout old Chinese sites. We encourage you to see more details about Chinese dragons' significance.

7. Many historical leaders were born in a Year of the Dragon.

8. The dragon is the subject of many Chinese proverbs and idioms.

The Dragon's character: "Gifted with innate courage, tenacity and intelligence, Dragons are enthusiastic and confident."

The Pearl Shoal Waterfall is thought to be the Dragon Gate

Legend says that carp that are able to leap over the mythical Dragon Gate will become dragons.

This is a Chinese parable for the effort necessary to overcome difficult times.

Many have tried to find the location of the Dragon Gate, but none have been successful.

Several waterfalls in China are believed to be the location of this sacred gate, for example the Jiulong Waterfalls, also known as the Nine Dragons Waterfalls, the Black Dragon Pool Waterfall, or the Pearl Shoal Waterfall. We invite you to find the gate for yourself in one these scenic locations.

10. China is home to the most places named after dragons.

Almost everywhere you go, you are sure to find an attraction named after dragons.

Outdoorsy visitors to Hong Kong can experience the majesty of a dragon-name place with a hike on the Dragon's Back trail. While you probably won't spot any dragons, the views it offers are sure to fill you with wonder.

In Guilin, you can explore the Longsheng Dragon's Back Rice Terraces. Named after the snaking, sloping surface that resembles the body of a dragon, this is a popular tourist attraction that connects you to the agricultural spirit of China.

Learn More About China and Its Dragons with Us

Visit the terrace pools in Huanglong, named for the Yellow Dragon.

You can create a personalized tour from your ideas with China Highlights, or start from one of these tour ideas: