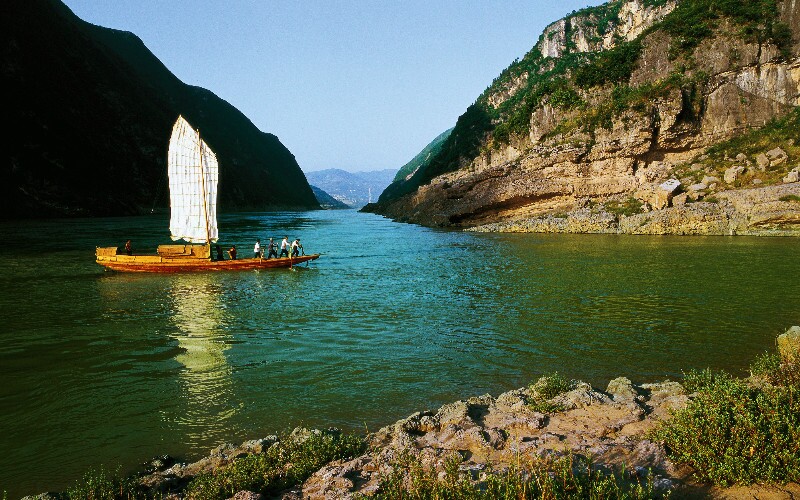 Hiking in the Three Gorges area allows you to see the scenery above one of the world's largest artificial lakes. You can watch the boats and ships go by below.

Though a lot of the old river valley is under water, a lot remains above it. The Yangtse River (长江) has been recently dammed by the biggest dam in the world, but you can still hike in the Three Gorges area of Qutang Gorge, Wu Gorge and Xiling Gorge. Qutang Gorge is the shortest gorge that is 8 kilometers or 5 miles long. Xiling Gorge is the longest one and is 66 kilometers or 40 miles long. Here are routes you you can take to hike in each of the three canyons.

Some parts of this route are a little dangerous. There is a highway from Nanjinguan to Shipai. After crossing the river, you can walk on the stone road from Shipai to Yangtou. No danger that way. Climbing mountains to Yangtou takes 2 to 3 hours. Although the road condition isn't good, it will not be dangerous because it isn't above the river. Next, we will walk on a path for about 40 minutes. Parts of the path are very narrow. This section of the path is slightly dangerous. However, compared with the path behind, the danger isn't worth mentioning. There is a section that has weeds as high as the height of a human being. Be careful there, because the surging river is below. Then take the mountain road to Nantuo Village. It isn't dangerous. From Nantuo Village to Sandouping, there is a wide road along the river. There is a highway from Sandouping to Maoping; and from Maoping and Xiangxi, there is another highway.

The Wu Gorge path is dangerous hiking, and those who lack hiking experience, companions, and preparation should avoid it. It is not dangerous walking from Padang Brickyard for an hour on fine sand and rock. After that, you will travel for about an hour on a mountain road all the way until you come to Nanmu Garden. Parts of the path are extremely dangerous. Its width is no more than one meter or less than a yard. Be careful because some part of the road has collapsed. Also you might get lost.

Afterwards, you have two options:

One option: When you arrive at Xiaojuping, continue to walk in the hill roads, cross Happy Bridge, and finally arrive at Beishi. This route isn't dangerous.

Other option: walk on a path from Shizhuzi to Beishi. This may be a little dangerous, but the going is less dangerous than the first part of the hike. From Beishi to Qingshi, the journey is relatively easy, the path is clear, and much of it is a mountain road. However, the road is on cliffs dozens of meters high.

The hiking starts from beacon towers in the northern areas. First, take a mountain road. Some parts are a bit dangerous. You can walk for about an hour on the wide road, but then it becomes narrow. The path becomes a meter wide, but it isn't dangerous. This is a route older people might want to take. It isn't dangerous.

Yangtze River is the crade of Chinese civilization. A cruise up/down the Yangtze, is something that any tourist to the region would not want to miss, as it offers unique encounters with China's rich cultural heritage as well as some spectacular vistas that will remain forever etched in one's memory. Check 2011 and 2012 cruise calendars.