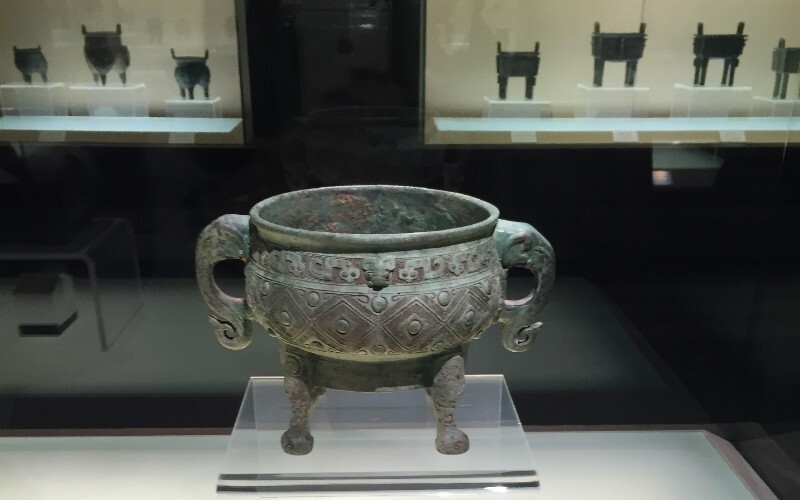 The Zhou Dynasty (1045–221 BC) saw China grow, fracture into states, then unite in imperialism. It was technically the longest dynasty, though the Zhouhad effectively lost power by 770 BC. Major philosophies and religions emerged that were the basis of Chinese belief in later eras, such as Confucianism and Daoism.

The era is divided into three periods: the Western Zhou Dynasty (1045–771 BC); the Spring and Autumn Period (770–476), when the empire divided into dozens of competing kingdoms; and the Warring States Period (475–221), when small kingdoms coalesced into several big warring states.

According to written accounts, the king of the Zhou tribe who was called Zhou Wu attacked the last king of the Shang Dynasty and became the first Zhou emperor. It is thought that the Zhou Empire was initially politically centralized over a small territory around the Yellow River (see our Western Zhou Map).

The Zhou Dynasty is said to have been initially strong. The ruling clan's name was Ji. But over time, as the territory grew, local rulers became more powerful. As the empire expanded in size, various strong clans emerged and expanded their territories.

In 771 BC, after King You replaced his wife with a concubine, the capital was attacked by his wife's father who ruled a region called Shen and by a nomadic tribe called the Quanrong. The rulers of several of the regions in the empire proclaimed the queen's son who was named Ji Yijiu to be the new king.

The capital was moved eastward in 770 BC from Haojing in Xi'an to Luoyang in present-day Henan Province (marking the start of the Eastern Zhou Dynasty of 770–221 BC). The sack of the king and the change of capital mark the end of the rule of the Ji clan over the whole region. After 771, the Zhou Dynasty became the nominal leading clan.

The main ancient written accounts about the beginning of the Zhou Dynasty are in the Records of the Grand Historian that were written between about 109 BC and 91 BC by Sima Qian.

Another text that is called the Bamboo Annals, it is said that the text, written on flat pieces of bamboo, was buried with the King of Wei who died in 296 BC and that it was rediscovered in 281 AD during the Jin Dynasty era.

The written accounts may not be accurate. There is a lot of myth and legend concerning this early period of time.

The Spring and Autumn Period was the beginning ofthe Eastern Zhou era. During this period, the Zhou Empire reached the Yangtze River, and it was basically centered on the eastern part of the Yellow River. The first king to rule in the eastern capital, Luoyang, was said to be King Ping.

The Zhou kings ruled as figure heads. Though the dynastic clan did have a small territory of their own at Luoyang, their territory was too small to raise an army. They depended on the surrounding regions for their defense. They performed religious ceremonies.

The main contributions of the Zhou era to Chinese literature were the prose works of the Spring and Autumn Period, many of which developed in the Warring Sates Period: the Confucian Classics, the Daoist writings, Legalism texts, and preserved poems, histories, and songs.

There was warfare between the states, and by the middle of the 500s BC, three big states emerged: Qin, Jin and Qi. To the south, the state of Chu became powerful also.

Finally, at the end of this period, the state of Jin was divided by civil war into three states, and there were about 14 states in the whole region.

In the Warring States Period, after the relatively peaceful and over philosophical Spring and Autumn Period, various kingdoms fought and conquered for over 200 years before the Qin State conquered them all.

In the Warring States Period, technology advanced so that iron tools and weapons became common.

Instead of companies of chariots, armies of organized mounted soldiers with masses of infantry became common. In the end, the Qin could muster armies of hundreds of thousands.

The Zhou to Qin Dynasty Transition

In 221 BC, the State of Qin conquered the last of the warring states, and united China under the Qin Dynasty. The First Emperor made Xi'an his new capital.

He was famous for huge building projects, such as a mausoleum for himself with Terracotta Warriors, and the first complete Great Wall.

In the Shaanxi History Museum in Xi'an, vessels and tools from the Western Zhou era are displayed. Our Xi'an tours, almost without exception, include a visit to the museum.

Tour Luoyang, the Eastern Zhou capital, with us, another of the Eight Ancient Capitals of China. Contact us with your tour requirements for a tailor-made tour if China, your way.