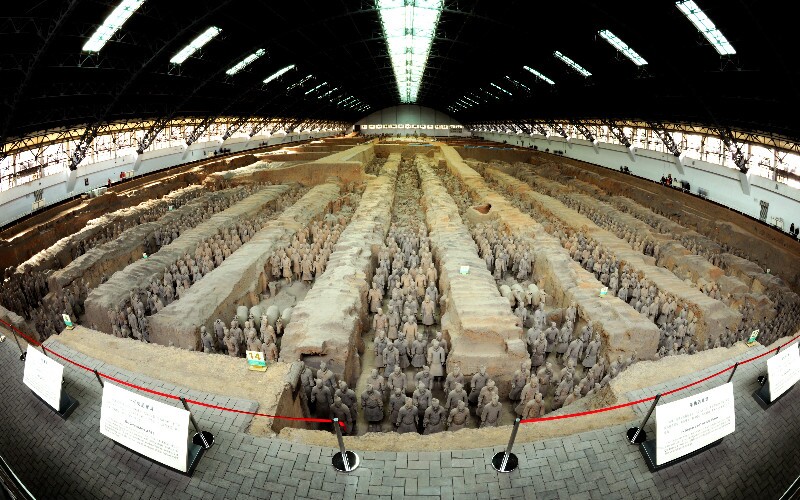 China's First Emperor is famous for reunifying China after centuries of division. He and his empire killed, reformed, constructed, and destroyed on an amazing scale. He's famous as a great emperor and infamous as a tyrant.

These 10 facts will help you understand the First Emperor better.

The First Emperor was born a prince of the state of Qin in 259 BC, and named Ying Zheng. In 246 BC, his father, King Zhuangxiang of the Qin State, died, and Ying Zheng became king. Since he was so young, affairs of state were controlled by the regent prime minister.

2) The First Emperor conquered the rest of China in 10 years.

In 237 BC, at the age of 22, Ying Zheng took full control of Qin. Then in 230 BC, with preparations made, he set about his ambition to conquer the other six Warring States in the region of today's China. (The movie Hero portrays the First Emperor's ambition.)

3) The First Emperor ruled a short but very significant dynasty.

In 221 BC, Ying Zheng founded the Qin Dynasty, which he intended to last forever, but which only lasted 15 years. He titled himself Qin Shihuang (秦始皇), pronounced "chin shrr-hwung", which means 'Qin [dynasty name] First Emperor'. China was named after the Qin (/chin/) state/dynasty. Xi'an, where the Terracotta Warriors located.

The First Emperor controlled his 30 million subjects and the empire's wealth oppressively. He ordered all peasant weapons turned in and molded into twelve 120-ton statues for one of his 200 palaces, and moved the wealthiest 120,000 citizens into the capital Xianyang (near Xi'an).

The First Emperor ordered all books burned that didn't agree with his autocratic ideology, and had 460 scholars buried alive. This made him infamous in many historical documents, especially in the records of the Confucian school. The First Emperor made small seal script, a style of calligraphy, the standard script in the Qin Dynasty, to eliminate written communication problems, especially with conveying the emperor's orders.

To guard the northern border of his empire against the Xiongnu, the First Emperor ordered the construction and connection of northern state walls and defenses. An estimated million people died in this project. See The Great Wall of the Qin Dynasty.

The First Emperor halved China's population. His wars, oppression, and construction projects brought great misery and death on a massive scale. The Warring States had in total about 40 million in 230 BC, but at the end of the Qin Empire, there were only 18 million people left in the region.

The First Emperor really feared death. From when he became the King of Qin he obsessed about immortality-giving elixirs and assassination threats, sending thousands out to find elixirs. This intensified in the later years of his reign, until in 210 BC, it's said, he died on his quest in eastern China. 10) The First Emperor has the biggest grave in the world.

From 246 BC, the First Emperor used 36 years and 700,000 laborers to build his mausoleum complex, a necropolis the size of Manhattan, estimated at 56–98 km2 (22–38 sq. mi.). The Terracotta Army there, replicas of the army of Qin, were designed to guard the First Emperor in the afterlife.

Click to see How to Visit the Terracotta Army — an Insider's Guide.

Discover More About the First Emperor by Touring China The Terracotta Army is one of the top attractions in China and one of the greatest archaeological sites in the world, wowing millions of people a year. It is advisable to travel with a knowledgeable guide, who can share the background information with you and help you to avoid the crowds.

We can help you discover more about the First Emperor and imperial China.

Popular itineraries including the Terracotta Army:

See more of our Xi'an Tours. Our tours are customizable — tell us your interests and requirements and we will help you to tailor-make a Xi'an tour.