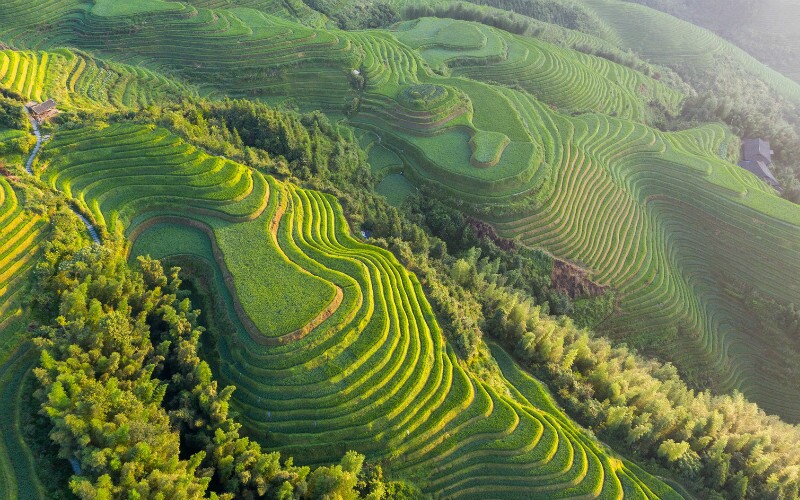 Longsheng Travel Guide - How to Plan a Trip to Longsheng

Fantastic natural scenery with spiraling rice terraced fields that were built about 700 years ago, and ethnic villages with unique buildings, costumes and customs.

Longsheng County belongs to the administration of Guilin City. It is famous for its beautiful rice terraced fields and ethnic villages in mountainous areas. The well-known Longji (literally meaning "Dragon's Backbone") Rice Terraced Fields were built through many generations’ hard work ever since the Yuan Dynasty (1271-1368). The fields built along the mountains slopes wind from the riverside up to the mountain top, with the highest place of an elevation of 885 meters (968 yards) and the lowest 380 meters (416 yards).

Longsheng Hot Spring attracts many tourists who look for relaxation. The hot springs there contain numerous mineral elements that are good for the body and skin. The nearby Huaping National Natural Reserve is rich in oddly shaped hills, dense forests, limpid streams, springs and waterfalls, as well as rare fauna and flora.

Besides the wondrous natural scenery, Longsheng County is also famous for its splendid ethnic customs and cultures. There are 10 ethnic groups in Longsheng, including Han, Zhuang, Yao, Miao, Dong and some others, all of whom are adept in folk singing and dancing. Each group possesses its own charm and differs from the others in architecture, clothing styles, food habits, festivals and customs. These unique people are found in several famous ethnic villages, including Yinshui Dong Village, Jinzhu Zhuang Village, Baimian Yao Village and Huangluo Yao Village. Huangluo Yao Village is well-known as "the Long Hair Village" because the women villagers there wear hair as long as 4 feet. Often visitors can see them washing their long hair along the riverbanks or take photos with them. They hold a Guinness Record for the length of their hair!

Ethnic groups living in South or Southwest China enjoy sour and spicy flavors. They often make pickles and preserved meat. In mountainous areas, where the temperatures are lower and with higher humidity, people like brewing and drinking rice wines. See more introduction about Longsheng food.

Longsheng and Longji Rice Terraced Fields have their seasonal beauties and are suitable for visiting all year round. However the most popular and beautiful periods are said to be May and November. May is the time when irrigation starts, and the fields are filled with water and thus reflect the image of the sky. November is when the harvest begins, and the view of rolling blades of gold is breathtaking. The view is also great in winter with snow.

Longsheng County lies in North Guangxi Zhuang Autonomous Region. It belongs to Guilin City, and nearby counties are Ziyuan (with Bajiao Zhai Danxia Geography Park), Xing’an (with Ling Canal), and Sanjiang (with Ethnic Dong Villages and Chengyang Wind and Rain Bridge). Though the roads are mostly bumpy and winding, transportation to Longsheng and to its nearby counties is convenient.

Longsheng located in the subtropical region, is a monsoon climate with abundant rainfall and a pleasant climate, the average temperature for the year is 19.3 centigrade with a July average temperature of 28.3 degrees. The average rainfall for the year is 192.6 cm per month. The average frost-free period is 314 days and yearly rainfall is 1500 -2400 mm, it is cold in winter and not too hot in summer The best time to visit this area is between April and October. During this time, the area is at its most green.

Longsheng is 88 km away from Guilin, and its weather is almost the same as in Guilin. But it is a mountainous area in the north of Guilin, so the temperature is relatively lower than that of Guilin city.