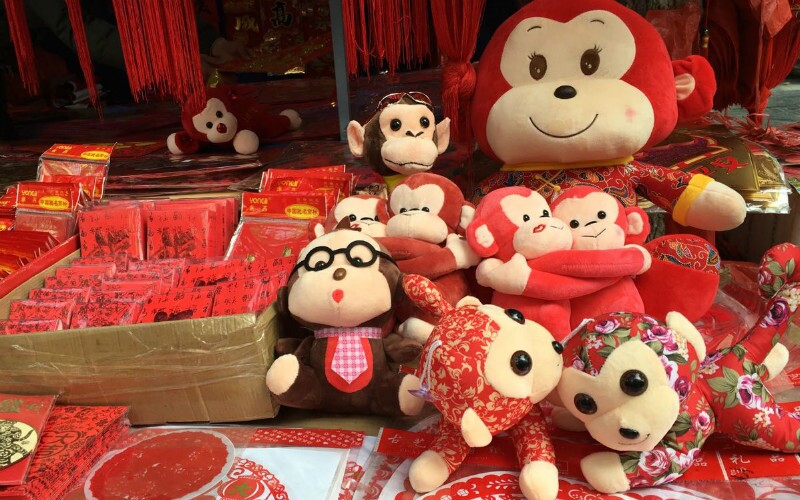 In China, the monkey is widely perceived as smart and powerful. People often offer sacrifices to monkeys to pray for rain and even for sons, and they have become an interesting part of Chinese culture. Chinese people love monkeys. Find out why below.

The Monkey (with a big 'M') is the ninth of the 12 animals in the Chinese zodiac. Many Chinese try to give birth in a year of the Monkey, as they believe that this will make their babies clever. In China saying, "Your kid is like a Monkey," is perceived as praise. More on the characteristics of the zodiac Monkey.

The Chinese character "猴" (hóu /hoh/ 'monkey') is pronounced the same as "侯" ('high official'), and the association dates back hundreds of years into feudal times.

The imagery of the monkey as nobility often appears in ancient paintings:

The Mythical Monkey — a Protecting God

In traditional Chinese mythology, the monkey god is almost all-pervading and all powerful. Images of the monkey (god) can be seen in many traditional settings as a talisman of protection:

The Child-Protecting Monkey on Kangs

A stone-carved monkey with a red thread on its tail is often displayed on the kangs (heated stone beds) used for babies of households in rural Shanxi, Shaanxi, and Inner Mongolia. According to ancient beliefs, the stone monkey blesses the baby with peace, and the baby will be very capable and efficient when he or she grows up.

A monkey statue was carved on top of each mooring post at each ferry crossing of Sanmenxia and Shan County. It was said the monkey statue would bless both the men and the boats with a safe journey.

The Stone Monkey for Protecting Horses

Almost every village had its own posts for tying horses to in Shanxi, Gansu, and Shaanxi provinces in ancient times, with a monkey statue carved on the top of each post. It was said that the monkey talisman would protect the horses from diseases and even death.

The Monkey King in Chinese Fiction

The Best Places to See Monkeys in China

In the southwest of the Yellow Mountains Scenic Area, Huangshan Monkey Valley is home to troops of Tibetan macaques. It is the only place in China where observing monkeys in the wild is specially arranged for tourists.

In Zhangjiajie National Forest Park, there are more than 3,000 macaques. According to their fur color, they are classified into three groups: blue macaques,yellow macaques, and golden macaques.

Mt. Emei Natural Ecology Monkey Reserve is China's biggest reserve for wild monkeys. There are over 1,000 Tibetan macaques. Along the tourist route from Leidongping to Jieyin Palace, visitors will likely see dozens of monkeys.