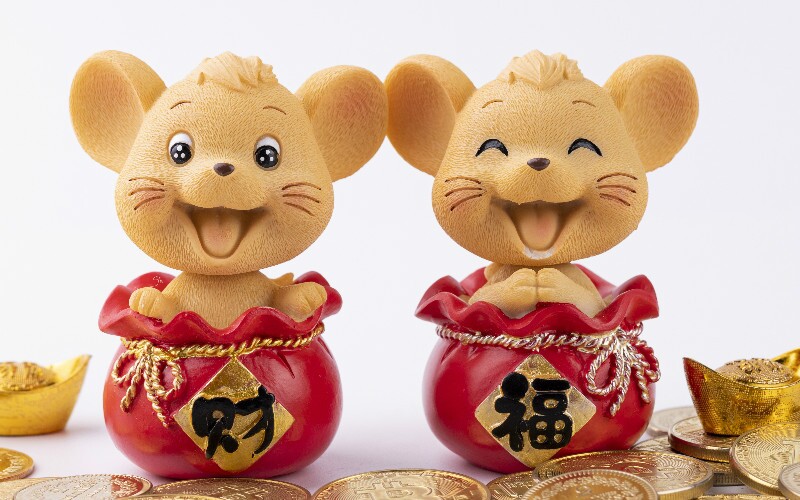 In the long history co-existing between humankind and rats, the Rat plays various roles in cultures of different nations, which are deeply rooted in people's minds.

By perfectly combining its biological features with its cultural features, the symbolic meaning of the Rat fully expresses the feelings and expectations of different nations in the long course of history.

The Rat symbolizes strong vitality in culture for two reasons. One reason is that the Rat has a strong reproductive capacity with a high survival rate, and about 5,000 babies are born to one female rat each year. The other reason is the Rat's fertility. Most rats can die a natural death after having numerous babies unless, unfortunately, they are caught by cats, being out of reach to other animals.

The Rat symbolizes intelligence in culture, which means both cuteness and shrewdness. The Rat is timid, suspicious, and alert with an acute sense of smell, having the ability to climb over walls flexibly and run across roofs as if flying.

What's more, the Rat can stay safe and sound even if it falls from the top to the bottom of a building.

Though the Rat is not as skilled as an aquatic animal in swimming, it's a piece of cake for it to swim across narrow ditches and shallow ponds. In order to survive in an emergency, the Rat can even swim several meters underwater in one breath without any injury.

In addition, people also believe that the Rat can communicate with God to predict good or bad luck. As a matter of fact, the Rat lives in nature and can react to natural disasters, such as earthquakes, flood, drought, and a plague of locusts, so it was considered to be a godly creature by the ancient people.

Ancient Worship of the Rat

The Rat was worshiped as a god by ancient tribes, and they offered sacrifices to it to pray for increased success and prosperity. As a result, the Rat has become a cultural prototype, toward which human beings have an ardent psychological feeling.

Dream Interpretation of the Rat

When it comes to the Rat communicating with God, we can get a rough idea about it due to the dream interpretations of rats. Everyone has dreams, so is it lucky or unlucky if you dream about rats?

Let's see how Emperor Wen of the Zhou Dynasty (1045 BC–221 BC) interpreted dreams about rats:

1. If you dream of many muskrats, difficulties and misfortune are near.

2. If you dream about a rat, you could have many enemies.

3. If married women dream of house rats in their hands, they are going to have a baby.

4. If you dream of pursuing a rat, you will make friends with those who are dishonest.

5. If you dream of catching a rat, you will suffer treacherous plots planned by others.

6. If you dream of a cat catching a rat, you will be blessed because your enemies will be weakened from killing each other.

7. If you dream about dead rats, you will be lucky.

8. If you dream of many rats, you will continually fail.

9. If you dream about rats digging holes in your bedroom or about rats biting themselves, you can escape from disasters.

10. If a doctor dreams about a rat, he will find a communicable disease within his community.

11. If you dream of squirrels (seen as a type of rat/mouse in China), you will be rewarded due to your hard work.

12. If a woman dreams of a squirrel, she will divorce her husband.

13. If you dream of catching a squirrel or putting it in your hands, you will be lucky because you are going to find hidden treasures.

14. If you dream of being bitten by a squirrel, you will disagree with your boyfriend on main issues.

15. If a farmer dreams about a squirrel, he will have a good harvest in the coming year.

However, the Rat also has negative cultural meanings in ancient Chinese sayings, such as "a rat crossing the street is chased by everyone" and "a rat and a snake are good company". The Rat symbolizes the ruler (Big Rat) who ground down and exploited the working people in the Book of Odes.

Despite all of these negative sayings, the symbolic cultural meaning of the Rat is an essential part of the Chinese culture that has lasted for over 5,000 years.