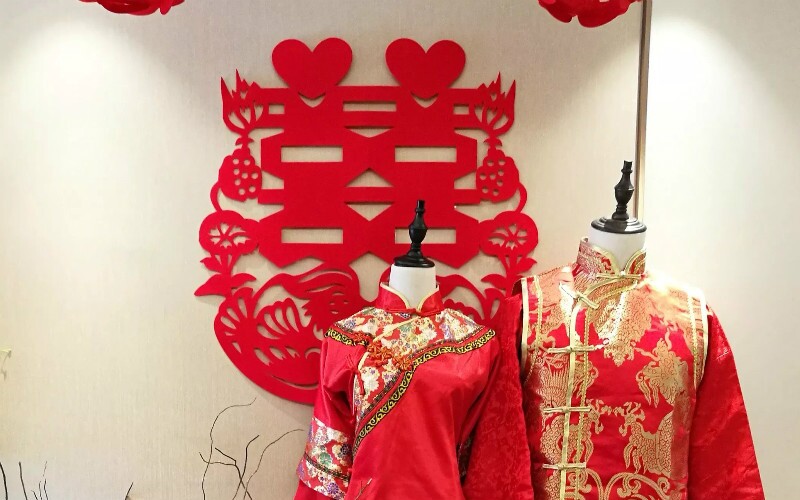 A Brief History of Marriage in China

As is the case with most societies, in primitive times the concept of marriage did not exist. People of a single tribe did not have fixed spouses and they could have multiple sexual partners.

Marriage in ancient Chinese culture went through a lot of changes. Initially, people bearing the same surnames were allowed to get married, marriage between siblings was allowed too.

Types of Marriages in Ancient Times

Nüwa and Fu Xi's fabled marriage (c. 2,600 BCE) was a highlight of their time. These legendary characters are responsible for the creation of mankind in Chinese mythology, they were both related by blood and they formulated proper procedures for marriage after marrying each other.

Towards the end of the Neolithic age, marriages among siblings got banned and exogamous marriages emerged. These marriages prohibited taking a partner from one's own group (family) but a girl coming from another group would be a wife to all of the brothers in that family.

Then followed the maternal marriage. Here the son-in-law would go on to live with his wife's family and he could not have multiple spouses at the same time.

Another type of marriage that was popular during the Zhou Dynasty(1046–221 BC) was the sororate marriage. A sororate marriage allows a man to marry his wife's sister or cousins while she is alive or when she dies.

Marriage Customs of the Han Dynasty

Betrothal gifts were so important that a marriage without these was considered dishonorable. Once this exchange of gifts took place, the bride was taken to the groom's ancestral home where she would continue to live even after her husband's death.

If after her husband's death her family wanted her to remarry, they had to pay a certain amount to the deceased husband's family to get her back. The children would continue to live with their paternal grandparents.

There was also the tradition of marriage brokers, presently known as matchmakers. Matchmaking was an important task assigned to elderly ladies who matched couples for marriage.

Polygamy was allowed until the end of the Qing Dynasty (1644 to 1912) for the specific purpose of fathering heirs. Since the Chinese culture is patrilineal it was important for a couple to have a son. An heirless man could have additional wives to increase his chance of having a son.

Concubinage is a term that refers to a sexual relationship between people where they cannot be regarded as legally or socially married, such a woman is called a concubine. Concubines do not have elaborate, formal wedding ceremonies and they can be divorced arbitrarily.

Concubines could be taken circumstantially (i.e. during wartimes or when a man has to live away and his wife has to stay behind to look after his family) but while they serve as wives they do not enjoy the same social status as the primary wives.

During the Qing Dynasty, the status of concubines improved. Marriage with a concubine was allowed in case of the death of the original wife (without sons). A concubine who was the mother of the only surviving sons could be promoted to a wife. The Great Qing Legal Code was dissolved by Hong Kong in 1971 and concubinage was banned thereafter.

In ancient times matchmaking was an essential part of a marriage. Elders along with professional matchmakers would ponder over the pros and cons of a potential proposal and after a long calculated discussion about the couple's social standing, reputation, financial situation and the social relationship between the two households, marriage was finalized.

Marriage back then was a social affair and every single aspect of the couple's life was weighed by the ‘wise' elders with minimum to zero involvement of the young couple.

It is established by now that marriage and matchmaking is a grand affair in Chinese culture, one that cannot be left to chance or fate. Traditionally Chinese people used Chinese zodiac compatibility to predict how successful a match will prove to be.

This kind of astrological matchmaking is done with the help of the Chinese zodiac that consists of 12 animal signs, names and the birthdates of the couple are used to determine how well matched the couple is astrologically.

Want to try something fun? Let our digital matchmaker run a quick compatibility test for you, Chinese zodiac love compatibility.

China is full of unique cultural surprises perhaps the most astonishing of them all is the marriage market of China. It is not uncommon for people to advertise themselves even in the rest of the world, people do it daily on many dating apps and websites to find true love.

In China, real-life marriage markets are set up to hunt for the perfect match. Every Sunday parents and sometimes grandparents of eligible candidates attend the marriage market to exchange information on their children. While there are many marriage markets in China, the largest takes place in People's Park, Shanghai every Sunday since 2004.

People hold up handwritten signs with relevant information on their children and a list of requirements for the partners. Members of the family stroll through the park to look at other signs to find the right match for their candidate. For some, this is the only way of preserving the traditional dating style that focuses on the involvement of families in matchmaking.

Read more on The Shanghai Marriage Market – An engrossing experience!

The Three Letters and Six etiquettes

After the long tedious task of matchmaking, the proposal is finalized through a formal letter of betrothal which is the first of the three letters. This letter is supposed to outline the couple's intentions to marry and set out their vows.

A fortune teller is involved to match the birthdates of the couple to predict if the marriage would be a successful one (see zodiac compatibility above).

Body alteration has often been used by many tribes for a number of reasons and some practice it to this day. Foot binding was another such custom that was practiced by the ancient Chinese people to enhance and beautify the foot of a woman.

The dainty feet were sought after in olden times and a well-bound foot meant greater prospects of marriage. In addition to being a mark of beauty and refinement, it pointed towards the girl's high social status.

It wasn't until the 19th century that the practice of foot-binding was evaluated and criticized by the intellectuals, this stirred up a lot of movements and campaigns but to no avail. In 1912 foot-binding was finally banned by the government of China.

Find out more about the process and history of Chinese foot binding.

Typically the tea ceremony is held on the big day at the couple's respective homes. However, some couples may choose to have the ceremony for both the families before the wedding dinner.

Want to find out more about this unique custom? Follow the link, Chinese wedding tea ceremony.

This small ritual towards the end of the wedding signifies the tying of the knot and becoming one in flesh and blood to live happily-ever-after.

Close friends and family accompany the bride and the groom to the bridal chamber where a lot of teasing is done and tricks are played on the newlyweds. The couple then shares a glass of wine. It is considered bad to touch the bridal bed and only the groom is supposed to touch it.

While in modern times some couples go for their honeymoon right after. Traditionally three, seven or nine days later the bride is supposed to return to her maiden home to visit her family.

Like many Asian cultures Chinese culture is highly superstitious, following are some of the ancient customs that were followed to avoid bringing bad luck to the couple.

Though a lot of ancient customs have been abolished and reformed, matchmaking is still an important part of the Chinese society and a lot of people still rely on the matchmaker's wisdom to find the perfect match.

Tea and the tea ceremonies still play a vital role in the modern Chinese weddings, it is still a source of paying respect to the elders and an integral part of the formal introduction of the couple's families.

Confucian wedding rituals have become more popular among couples recently. In such innovative ceremonies, the bride and the groom pay respects to a large portrait of Confucius in the banquet hall at the start of the ceremony.

Before entering the bridal chambers, the bride and groom exchange nuptial cups and perform the following ceremonial bows,

Begin Your Own Adventure with China Highlights

Come experience historically and culturally rich China with our Golden Triangle tour. This 8-day tour is ideal for first-time visitors and can be tailored to your preferences. In addition to touring the most popular three destinations of China, this tour covers five world heritage sites. Our private guideswill give you the best experience of each so that you can return with fond memories.

Or check out our Top 10 China Tour Itineraries to get inspired for designing your own tailor-made China tour with our experts' help.