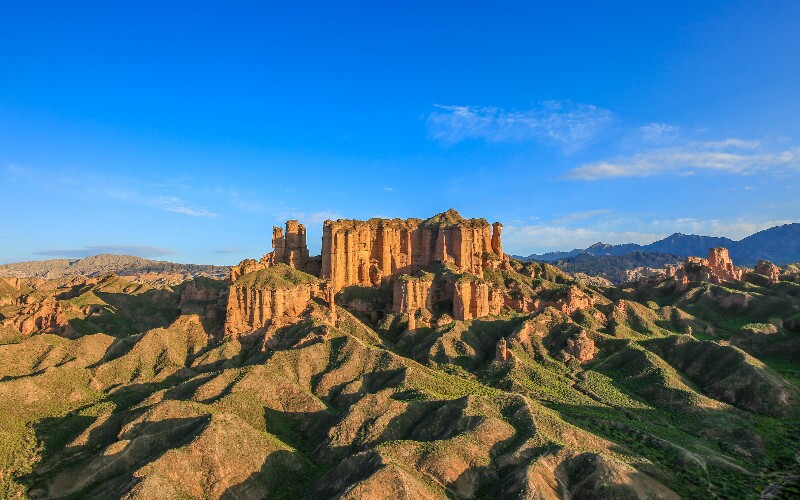 The Chinese call the sandstone and conglomerate rock areas of their country "Danxia landforms". There are many parks protecting these eroded sandstone formations in the southeast, south, and northwest of China.

The rock formations are like those in the national parks in deserts in the southwest of America such as Red Rock Canyon, Zion, and Bryce Canyon, and such as Australia's Purnululu National Park. Some Chinese sandstone areas are unusually colorful, but other parklands have verdant foliage, waterfalls, rivers, and old Buddhist caves.

Danxia landscapes range from stark and desert-like rock formations or watery green terrain, and they are beautiful places for recreation, hiking, and sightseeing. The following are the best six of these rugged Danxia parklands.

Zhangye is noted for its sheer color. It is the most colorful sandstone in China and probably in the world.

Binggou has red cliffs and pinnacles, but there is less color, and it looks like Red Rock Canyon in the US. This is desert land that lets you see the rock formations clearly. Best to visit near sunset when the colors change.

The Red Wave of China

China has its own version of "the Wave of Arizona" about 450 km north of Xi’an. The Wave of China is mainly red, like China's flag. Its sandstone has peculiar swirls, and looks remarkably like a "magic eye" 3D construction. Undeveloped for tourism, facilities and infrastructure are quite backward. Your journey there would be a long one.

Taining is liked by tourists for its boat cruise where you can see the verdant scenery that contrasts very much with the desert scenery at Zhangye. This park has eroded cliffs and spires that are often covered with plants. The park is near Xiamen, and it is also known for a hanging Buddhist temple and many caves to see.

Mt. Wuyi is two and a half hours away from Taining. It is more popular than Taining and tourists like rafting and hiking amid waterfalls and streams.

Kanbula in Qinghai Province is noted for the jagged cliffs and a reservoir lake.

Unlike the other parks, this is at a high altitude. It is higher than 2,100 meters or 6,600 feet. The red rock isn't colorful like Zhangye, but the sheer cliffs topped by bushes are unique. You can take a boat ride to see the scenery.

Kanbula is on the remote upper reaches of the Yellow River. Contact us for help with getting there, and other arrangements.

Rocky Spires of Mt. Lang and Mt. Wanfo in Hunan

Langshan and Mount Wanfo are both Heritage listed.

Mount Lang has sharp, high peaks that look somewhat like the much more popular Zhangjiajie/Wulingyuan that is also in Hunan. Wulingyuan is a different kind of rock called quartzite that is stronger than Danxia sandstone.

Wanfo has mesas instead of spires. These two danxia areas are little visited by foreign tourists.

You could make a detour to see Hunan's Danxia with one of our Zhangjiajie tours.

The Jagged Hiking Hills at Mount Danxia in Guangdong

Mount Danxia, from which all Danxia landscapes get their name, is mainly known as a place for hiking amid the pillars, mesas, and sandstone rock formations. There is also river boating. The area doesn't get a lot of tourists. It is a place to escape from the crowded city of Guangzhou. The relative isolation makes it excellent for nature appreciation and hikes, and people stay in nearby Chinese hotels.

The Hills at 'Octagon Village' Near Guilin

Bajiaozhai Geology Park has whitish-red colored sandstone capped with vegetation. They look much like the limestone karst hills around Guilin.

It is 66 miles or 107 kilometers from Guilin. The area doesn't get a lot of tourists, but we can arrange a visit during a trip to Guilin.