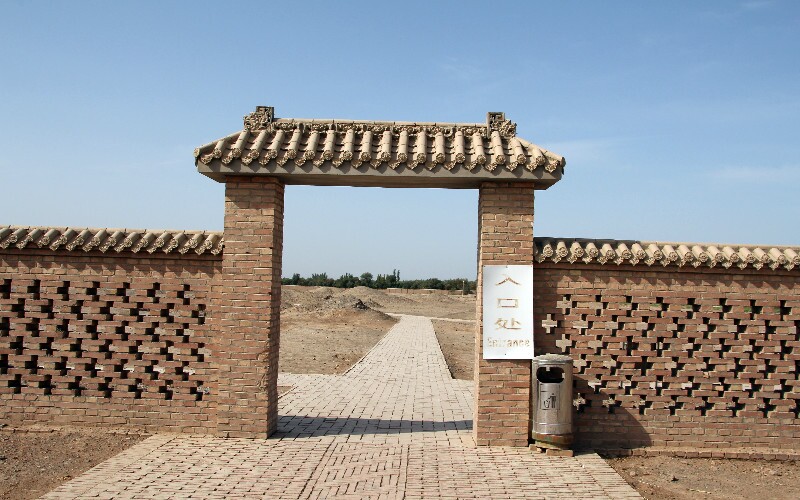 People in the Gaochang urban area several kilometers to the south were buried in these tombs. There are about 1,000 tombs. There was a large population of Chinese living in Gaochang during the 5th and 6th centuries before the Tang conquered the area in 640.

These people retained a common Chinese belief that life after death was like this life complete with bureaucracies and money, so the tombs contain the things people need such as food, clothing, and shoes, or representations of these commodities in the form of figurines. The writings, epitaphs and decorations are mostly Chinese though some Persian decorations were found also. Perhaps Astana was meant specifically to be a Chinese graveyard. Some bodies of people of other races have been found too.

A lot of the original material is in museums in other countries. The tombs held figurines and interesting paintings. The figurines depict both Mongoloid and Caucasian people. The graveyard is about 10 square kilometers in size. Of all the tombs, only three are open to the public. There isn’t much to see, but since it is between the Bezeklik Grottoes and the Gaochang Ruins, people might want to make a quick stop at the Astana tombs while touring the area of Turpan.

Those buried there include important officials and common people. The people interned date from about 273 during the Western Jin Dynasty to the year 778 during the Tang Dynasty. The tombs were generally the burial places of families. They had a common style of construction similar to that of the Hexi Corridor in Gansu Province. Most have a sloping stairway about 4 to 10 meters long leading to a rock-cut door about a meter wide and more than a meter high.

Inside, the deceased were wrapped in textiles. They were usually placed in wooden boxes. Some of the corpses had coins on their eyes. These coins were of Byzantium or Chinese origin or copies of such coins. It is interesting that one tomb had a number of different kinds of pastries including a jam tart, twists, and buns. Books and manuscripts have been found.

Tombs were usually arranged according to family generations. A lot of naturally dried mummies were found as well. There was often a funerary banner depicting the Chinese myth about Nuwa and Fuxi who created the world. A big modern statue of Nuwa and Fuxi has been placed outside the accessible area.

After the Silk Road trade started about 100 BC, Chinese started to settle in the area. Apparently, there was a big community of them in Gaochang about by the 5th century. In the middle of the sixth century, the Gokturks ruled the region and controlled the Silk Road trade. They left some artwork in the Bezeklik Grottoes (柏孜克里千佛洞). Then the Tang Empire conquered the area about the year 640.

It was an important military outpost for the Tang rulers who profited from the trade. The An Shi Rebellion ended in 763, and the Tibetan Empire took control of the area, and they cut off China’s direct access to the Silk Road route through the region. The Tibetan invasion may be why Chinese burials in the tombs stopped at this time. The Uighurs arrived in the middle of the 9th century, but by then the graveyard wasn’t used.

When Westerners first came to the region, they were astonished to find evidence of lost cities and civilizations. An archeological race of sorts developed as people from developed countries came to the dangerous region looking for archeological discoveries.

Aurel Stein came to send artifacts back to British museums in 1907 and 1914. When he came, the site of the graveyard was covered by perhaps hundreds of large jars. The place looked important archeologically. In 1915, he made important discoveries and sent back lots of material.

Location: The Astana Tombs site is about 41 kilometers east of Turpan by road G312.

You can see the ruins of the city of Gaochang where most of the deceased may have been from. It is only about 4 kilometers by road, and it is almost directly south. The Bezeklik Grottoes are about 11 kilometer north by road.

The ruin of the city of Jiaohe that is east of Turpan about 10 kilometers also has a graveyard next to it. That graveyard is far older and dates to about 300 BC. Remains of a mysterious Caucasian Cheshi or Yuezhi people have been recently found there. There is a museum about the Cheshi people next to the Jiaohe Ruins.