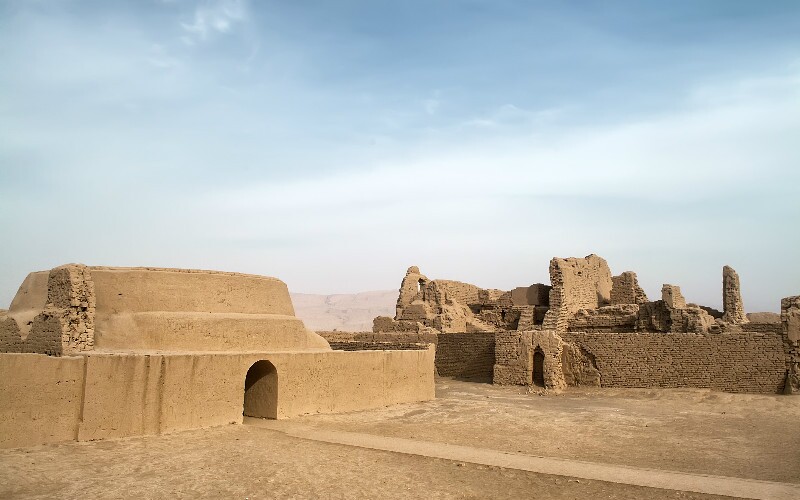 One of the highlights of a trip to Turpan is to see the Gaochang Ruins. It’s kind of beautiful in it’s owns way, and makes for great photographs against blue sky or in the evening sunlight. It was at one time a fortress city for the Han Dynasty and the Tang Dynasty army garrisons, and it was a fortress city and a capital city for the Turpan region for more than a thousand years. It was a stopping place and market town for caravan traders. There was a large Chinese community in Gaochang from about 400 AD until after the conquest of Gaochang by the Chinese Tang Dynasty around the year 640 AD. It was once the biggest city in Xinjiang, and part of its legacy are artwork and documents at the Astana Tombs and the Bezeklik Grottoes. Now it is a big stretch of sandy piles of mud and bricks with the remains of walls and buildings scattered around. But it is an interesting place to walk around in as part of a tour of Turpan.

Gaochang (高昌故城) is also called Karakhoja. It is about 45 kilometers or 28 miles east of Turpan. If you only have a brief time to see an ancient city in the Turpan region, then the ruins of Jiaohe is the place to go since the site is smaller, the place is better preserved, and the surroundings are more beautiful. It is also much closer to Turpan. But if you have the time for a leisurely stroll in the ruins of the big ancient Silk Road city, then walking around the Gaochang ruins can be fun. Gaochang is much bigger. The site measures about 1.5 kilometers by 1.5 kilometers, or 1 square mile. Jiaohe is smaller, measuring about 170 meters by 1.5 kilometers. The place looks like a big sandstone desert with recognizable man-made structures, but the gullies you walk on were once avenues thronged with crowds of people from all over Asia and merchants selling goods from east and west. There are also some recently constructed or rebuilt buildings.

When trade opened up between the Han Empire and western countries about 100 BC, Gaochang was a major stop because there was water and food to supply the travelers. The Han Dynasty used it as a garrison about 50 BC. But empires and kingdoms contested the site, because the people who controlled the city had control of trade. It became the capital city of the area around Turpan. A large community of Chinese lived there and buried their people in the Astana Tombs from the late 200s to the late 700s. They believed a mixture of ancient Chinese religious beliefs and Gandhara-style Buddhism. But people of other races lived there also. Judging from the artwork and documents in various languages left behind in the region around Turpan, Gaochang was multi-religious and multi-ethnic with Indians, Central Asians, and East Asian people living together. There were Manicheans, Christians and Buddhists just before the Mongol invasion.

The Uighurs came to the area in the middle of the 9th century. They submitted to Genghis Khan of the expanding Mongol Empire at the beginning of the 13th century. The Mongols and the Uighurs started becoming Muslim. When the Mongol Yuan Dynasty (1279-1368) fell, there was a disruption of trade through the area. Warfare between the Uighurs and Mongolians damaged the city, and the disruption of trade and perhaps the cold weather of the Little Ice Age caused people to abandon the city.

The people who lived in the area around Gaochang used it as a source for fertilizer, and farmers used it for fields. The Moslem Uighurs also purposely destroyed artwork and manuscripts that they found there, fearing the Moslem leaders’ injunction against keeping idols and false books. Jiaohe and Gaochang were abandoned around the same time, but maybe Jiaohe is better preserved because the people found it more difficult to cultivate Jiaohe. The Jiaohe islet is surrounded by two canyons and steep cliffs. This made access to the city more difficult, and though farmers cultivated in the canyons around it, they couldn’t easily cultivate in the city, carry materials away, or irrigate crops in Jiaohe.

People will find newly renovated and rebuilt buildings at the site. The site may be becoming overly renovated.

About 40 kilometers directly west are the Jiaohe Ruins. These are much better preserved. Near them is a museum about the Yuezhi or Cheshi people who inhabited the area and left tombs with Caucasian mummies before the Silk Road era.