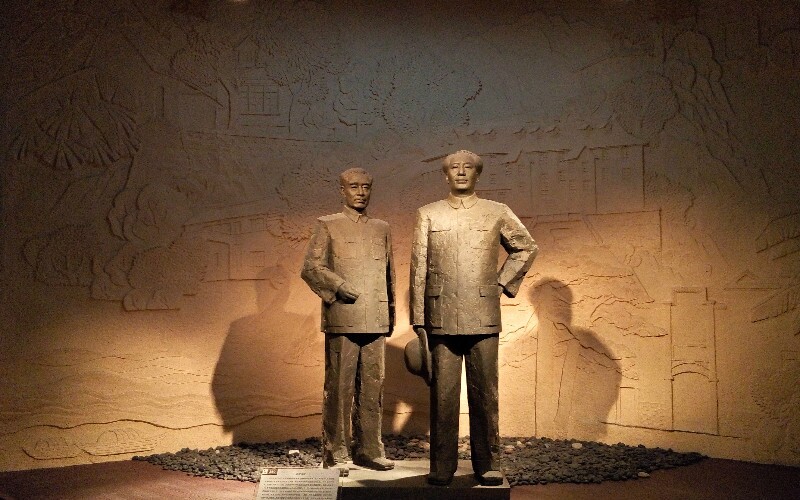 During WWII and some years before, the Chinese Eighth Route Army kept a liaison office at Qixianzhuang on Beixin Street in Xi'an. In 1959, the offices were turned into a museum called the Memorial Museum of the Eighth Route Army in Xi'an. One of the courts of the complex is now a modern hotel called the Qixian (7 Sages) International Youth Hostel.

Travel to the Xi'an Eighth Army Offic Museu is easy because the site is near both the main Xi'an Train Station and the Xi'an Bus Station. Most of the offices were turned into a museum called the Lintong Museum, so people can learn about the history of WWII and the Communist Party at the museum.

At the time, four courts were used called Court 1, Court 3, Court 4 and Court 7. Court 1 occupies a space of about 1,300 square meters. You can see single-story brick and wood structures with doors. There is an underground room that was perhaps meant to be a bomb shelter. Court 2 and Court 4 were used by various departments affiliated with the office, and Court 7 is now a modern hotel.

In the museum, you can see hundreds of artifacts from the time, thousands of photographs, and other items. You can also see letters written by generals and high political officials.

The Communist Party and Nationalist Party vied for control of China in the middle of the 1930s when the Japanese were attacking the country. In October of 1936, Chiang Kai Shek flew to Xi'an from Nanjing. He was imprisoned there by two leaders named Zhang and Yang.

People differ about their reasons for doing this. Then political leaders all over the world got involved. Finally, in December of 1936, Chiang Kai Shek signed an agreement near the Lintong Museum and the Huaqing Hot Springs in the Lintong District of Xi'an to cooperate with the Communist Party instead of trying to fight against them.

Soon after this, Japan tried to invade the area. The Communist Party had two main army divisions called the New Fourth Army and the Eighth Route Army. Their forces were smaller than those controlled by Chiang Kai Shek.

The Japanese advanced southwards to attack the main Nationalist army, so the Eight Route Army was behind enemy lines and often tried to appear as Japanese forces or civilians to evade Japanese attack. They attacked garrisons and supplied trucks and trains. They also recruited people into the army so that by the end of WWII, it is said that the Eighth Route Army had grown to over half a million people.

When WWII was over, war started between the Communists and Nationalists, so the liaison offices weren't needed. After intense fighting, the Communists quickly won the war.

After the completion of renovation in 1959, Court 1 was turned into the Memorial Museum of the Eighth Route Army Xian Office. In 1984, the main buildings of Court 1 were reconstructed, and some of the buildings in Court 3 and Court 4 were renovated. In 1988, the national government declared it to be one of the major historical sites and put it under protection.

These facilities make travel to surrounding attractions or other cities very convenient. You can walk to the Eighth Army Office Museum from the bus station or the train station by walking south on Jie Fang Lu and then walking west on Xiqi Lu (West 7 Street). The address is No. 1 Beixin Street, Xincheng, Xi'an.

Two attractions in the city are the Xi'an Bell Tower and the Xi'an Drum Tower. These attractions are both nearby about 1.5 miles or two kilometers away to the southwest. You can walk to them by taking Nan Da Jie (South Big Street) south. They are adjacent to each other. The Xi'an Beilin Museum is about 3 kilometers or about 1.5 miles directly south of the museum. For accommodations, the Qixian Hotel is said to offer good backpacker rooms for an economical price.