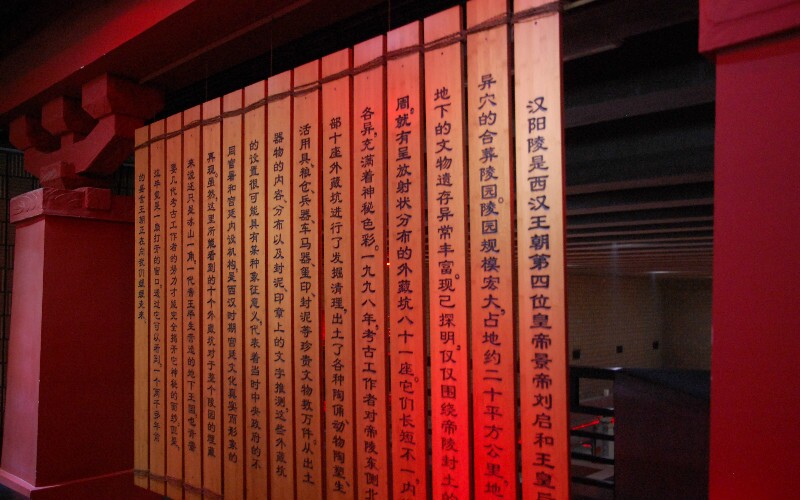 The Hanyang Tomb and Museum is about 20 kilometers or 12 miles from Xian. The museum has an underground exhibition hall so that people can see the results of the archeological digs in the big mausoleum complex of Emperor Liu Qi (188 to 141 BC) of the Han Dynasty, his wife, officials, dynastic clan members, and commoners.

There is also a graveyard for slaves who built the complex. The underground hall was opened in 2006. The archeological dig site only covers a small area, but the whole burial complex is immense. It covers a total area of about 10 square kilometers or 4 square miles. It is like a little city or a little kingdom complete with miniature statues of animals, servants and soldiers positioned in various places like a make-believe miniature kingdom.

Along with the underground exhibition, there is an above ground regular museum building that houses exhibits, and visitors may also go out to see and even participate in the archeological digs if arrangements are made.

Liu Qi (188 to 141 BC) was called the Emperor Jing of Han. He was the sixth emperor of the Western Han Dynasty (206 BC to 9 AD) era. He became the emperor in 156 BC. It was customary for emperors to build big tombs for themselves in the Han Dynasty, and he followed the custom soon after he became an emperor.

He started to build the mausoleum in 153 BC. He had a big burial mound built that now looks like a small hill because of erosion. But people think that when it was originally built, it was a flat-topped pyramid with four faces and a flat top that is reminiscent of flat-topped pyramids in Mexico.

By the time he became an emperor, the Han Empire had grown big and comparatively prosperous, so his tomb may have housed exquisitely rich treasures. But now there isn’t much treasure to be seen, but there are thousands of pieces of miniature ceramic statuary. The ceramic figurines of soldiers are about the 1/10 the size of real soldiers.

Though the ceramic figurines and the ghost kingdom are reminiscent of the statuary found in the mausoleum of the first Qin Emperor named Qin Shi Huang, the Terracotta Warriors of the Qin Empire were life-size and more realistically detailed. The statuary in this mausoleum look more like dolls and toy figurines. Adding to the look of an imaginary kingdom are sculptures of mythological creatures such as dragons and other creatures, and there are carvings of dancing lions. The area is still being excavated, and as new artifacts are found, they are being exhibited. The archeological excavations and miniature statuary are interesting.

Information about the Hanyang Museum

Rising above the fields, there is a small flat-topped hill that is really the burial mound of Emperor Jing who was also called Liu Qi. But people wouldn’t know it from a distance. There are archeological pits on display. One pit is full of ceramic statuary of a flock of pigs, though the pigs are arranged in formation unlike the way pigs usually herd. People can view pits protected by glass as they walk along glass corridors and watch optical illusions that are a part of the museum’s display.

The Han Empire was the first big and long lasting empire in the area. He was known as an emperor who wanted a peaceful reign, and he did not want to burden the people with heavy taxes, wars, and much forced labor on construction projects in contrast to some earlier emperors. So the economy of the empire prospered. He put down a rebellion of seven provinces during his reign.

He started to construct his own mausoleum in 153 BC about three years after he became emperor, and it was basically completed in 125 BC after he was dead. The imaginary kingdom that he built and that people can now visit is now more than 2,000 years old.

Other Mausoleums in the area: In the nearby city of Xianyang to the west, there is the Qingling Mausoleum area of the Tang Dynasty that has the Qingling Museum. During a visit there, you can see the artifacts and the mausoleum of the early Tang Dynasty rulers who lived about 800 years after Emperor Jing of Han.

It is interesting to compare the differences of style and ideas of the two dynasties. The Mount Li Mausoleum of Qin Shi Huang who was the first emperor of the Qin Dynasty is the biggest mausoleum in China. It is 47 meters or about 154 feet tall. The Zhaoling Mausoleum of Li Shimin (599-649) is another big Tang mausoleum complex in the area.China Highlights can help you design a trip to this and other sights in Xian