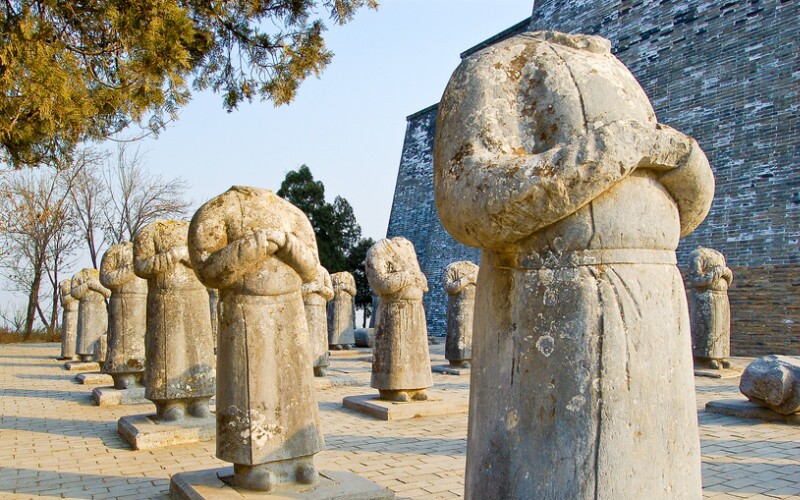 Information about the Qianling Museum

China Highlights can help you customize a tour to visit this museum and other historical sites in Xian, or just see our Xian Tours.

Li Zhi (628-683) was the ninth son of Li Shimin and Empress Zhangsun. His imperial name was Emperor Gaozong (High Religion). Li Shimin’s imperial name was Emperor Taizong. Li Zhi became the emperor in 649 when his father died. Emperor Taizong was a strong ruler, but Li Zhi was a weak ruler. In about the middle of his reign in the year 665, his wife named Empress Wu had two high officials who supported Li Zhi killed, and she took over much of the rule of the Tang Empire. Li Zhi was physically weak with health problems towards the end of his rule. After Li Zhi died in 683, Empress Wu continued to rule though Li Zhe became the fourth Tang Emperor. The reign of Emperor Gaozong and Empress Wu was strange.

Though Li Zhi’s reign was rife with political plots and assassinations and his wife became the main ruler, the Tang Empire armies were strong enough to win several major wars and defend its territory. Many of the emperor’s family members were assassinated. It is believed that Empress Wu killed several of her own children to consolidate power. Li Zhi was buried in the Qianling Mausoleum in 684. From then on, his two sons ruled though Empress Wu was the major ruler.

Li Zhe was the fourth emperor, but Empress Wu replaced him with another son named Emperor Ruizong. In 690, the Empress deposed him and started her own dynasty. It is said that she was the only woman who had her own dynasty. She ruled as Empress of the Zhou (周) dynasty for 15 years. In early 705, she became ill. There was a coup led by Tang generals and officials, and the building she was in was surrounded and her supporters were killed. She was removed to another building and a man of the Tang Dynasty clan became the next Tang Emperor. She died later in 705 and was buried in the Qianling Mausoleum with the emperor in 706.