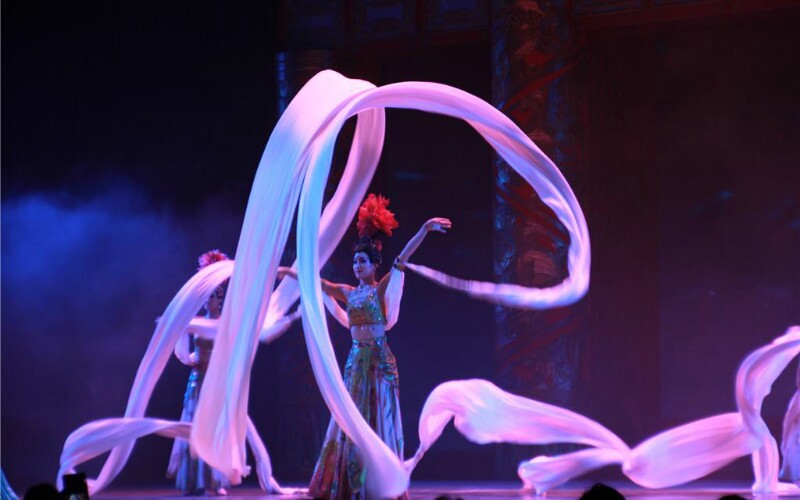 The Tang Dynasty Show is an excellent performance that fully displays the essence of music and dance art of the Tang Dynasty (618–907), and it is praised to be the premier pseudo-classic show in China.

The artistic conception of customs from the Tang Dynasty is fully expressed in the show, and it's really enjoyable to appreciate the splendid performance that has endured for over 1,000 years.

Highlights of the Tang Dynasty Show

The Tang Dynasty Show is comprised of eight sections: Hooray to the Emperor, White Linen Dance, Da Nuo, Rainbow and Feather Garment Dance, the King of Qin Breaking Through the Battle Line Dance, Spring Outing, Orioles Twittering in Spring, and the Feet-Stomping Song.

In addition, the Palace Banquet is an excellent opportunity for guests to taste delicious palace dishes and wine while appreciating the wonderful music and graceful dancing.

Hooray to the Emperor

"Hooray to the Emperor" (万岁乐) depicts the splendid scenes of the Emperor holding court with high-ranking officials paying him visits, accompanied by resounding bells and drums, and tens of thousands of people hooraying simultaneously. It vigorously recreates the prosperous and powerful Tang Empire, depicting the government functioning well and the people living in harmony. Created by the people of the Jin Dynasty (256–316), the White Linen Dance (白紵舞) was even more popular during the Tang Dynasty, and all the dancers wear white linen skirts with long sleeves, hence its name.

The long sleeves wave in the air when the dancers move lightly to soft music, which is just like white clouds chasing after the moon, creating a very elegant atmosphere.

Da Nuo (大傩) is a popular form of sacrifice dance, featuring simple movements and pious facial expressions, and it was used by people to pray for good luck and drive away evil spirits and diseases during the Tang Dynasty.

Da Nuo was created by an emperor, according to legends, and all of the dancers wore animal masks, holding spears and a shield in their hands on New Year's Eve, so as to drive away evil spirits. The Rainbow and Feather Garment Dance

According to historical records, the Rainbow and Feather Garment Dance (霓裳羽衣舞) was created by Emperor Xuanzong (658–762) of the Tang Dynasty following a dream.

Emperor Xuanzong dreamed about wandering in the Moon Palace, where he saw many pretty girls dressed in cloud-like clothes, dancing to soft music. After the dream, he composed a piece of music and ordered his favorite concubine, Yang Yuhuan, to arrange the "deathless dance".

The King of Qin Breaking Through the Battle Line Dance

As the most representative military dance of the Tang Dynasty, the King of Qin Breaking Through the Battle Line Dance (秦王破阵舞) fully displays the military prestige and strategies of the Emperor Taizong (598–649) in an artistic way, and it features imposing scenes with flexible movements.

Spring Outing (游春图) — played with a Pipa (a string instrument with a fretted fingerboard), a Ruan (a string instrument), and a Guzheng (a half-tube instrument with movable bridges and 21 strings) — depicts the scene of high officials and refined scholars going for an outing in the early spring, and it praises the return of spring to the earth and of all things taking on a new appearance.

"Orioles Twittering in Spring" (春莺啭) is the only piece of music played solely by panpipes (a primitive wind instrument consisting of several parallel pipes bound together) in China, featuring a lively and crisp melody, and symbolizing the prosperity of the Tang Empire.

With stomping feet acting as the rhythm, the Feet-Stomping Song (踏歌) features a kaleidoscope of gorgeous tempos, in which the performers sing and dance hand in hand. It recreates the scene of the reunified nations joining in jubilation during the golden times of the Tang Dynasty. The Hotpot in the Palace Banquet.

As the only large pseudo-Tang theater restaurant in China, the Tang Dynasty Show Restaurant can hold 650 guests at a time.

The palace dishes feature a combination of authentic Tang royal dishes and Cantonese dishes, and it's really enjoyable to experience the royal life of ancient China while fully appreciating the music and dance performances in the restaurant.

Known as Changxi in ancient times, Xi'an served as the ancient capital for 13 dynasties during the course of history, including the Tang Dynasty.

The Tang Dynasty was the most prosperous dynasty with its music and dance symbolizing the splendor and the glory of the Chinese civilization.

Bus: Take bus 710 and get off at Yucai Road, and then walk a few steps to reach the venue.