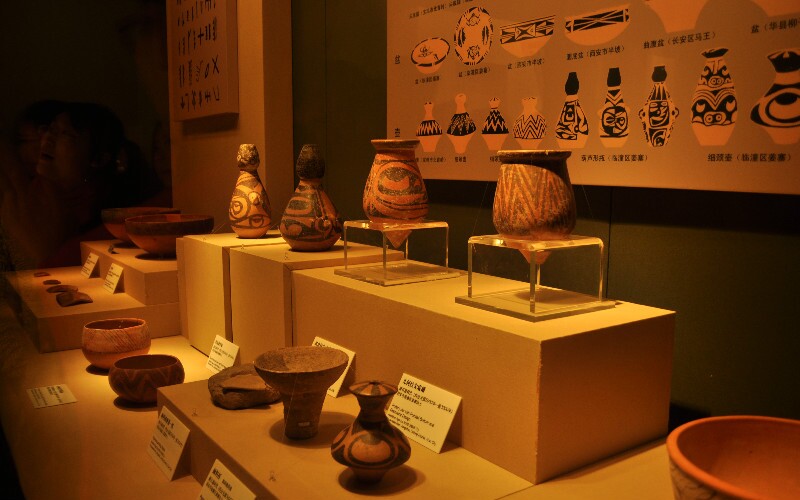 The Xianyang Museum is one of the famous museums in China. It mainly has collections of the Qin (221 BC to 206 BC) and Han Dynasty(206 BC to 9 AD) eras. Xianyang was the capital city of the Qin Empire. The Qin Dynasty controlled the first large empire in the land, and the boundaries established during the Qin Empire were maintained and enlarged upon by the Western Han Empire. The exhibits contain some of the best artifacts that have been discovered of that time in the various large imperial tombs and ruins around Xianyang. The museum covers about 1,100 square meters or about a quarter of an acre. The museum is in the modern city of Xianyang. The area is a few kilometers west of Xi'an, and it was the capital city of the Qin Empire. The Han Dynasty used it as a mausoleum area to bury people. The ticket price is inexpensive, but the nine halls in the museum house real treasures.

Information about the Xianyang Museum

The renovated building was once a Confucian temple area of the Ming Dynasty era (1368-1644), and it retains some of the look of a Confucian temple. The best artifacts in the collection are the bronze vessels and pieces of art and the Western Han Terracotta Army. Some of the Terracotta Army pieces retain much of the original color, so visitors can see how people looked 2,000 years ago. There are 9 halls and a newly opened "Stele Corridor".

The 9 halls house a collection of Han and Qin Empire artifacts and teach about the history of the two empires. The first three halls contain Qin Empire relics including jade objects, potteries, and written records. The fourth hall contains modern painting and calligraphy. The Han Empire Terracotta army is in the fifth and sixth halls. The 3,000 terracotta statues were excavated in Xianyang in 1965. They give an idea of how the Han people used to dress.

The seventh, eighth and ninth halls contain the biggest sitting bronze Buddha statue of the Ming Dynasty (1368-1644) as well as other religious and cultural relics. The stele corridor contains steles with inscriptions.

The Qin and Han Empires

Qin Shi Huang who was the first emperor of the Qin Empire was ruthless, but he succeeded in making the area's first big empire that stretched from Korea to areas south of the Yangtze River. It covered most of Central China north of the Yangtze River. During that time, the various cultures and countries in the area were merged together. He used the human labor to build huge construction projects. He also destroyed much of the religious and philosophical texts of his time as he tried to wipe out opposition, so the Han Empire that emerged from the Qin Empire had a standard of philosophical and religious ideas. The Qin Dynasty wasn't popular, and it lasted for only fifteen years.

The next dynastic clan called the Western Han Dynasty lasted for much longer. It lasted more than 200 years. The people in the empire were much more prosperous, and the population grew substantially. The population in the Qin Empire collapsed due to the warfare and purges. The Western Han Empire also added territory, so it was much bigger. Members of the Han Dynasty built a terracotta army that resembles the better known Terracotta Army of Qin Shi Huang Di's mausoleum. About 3,000 statues of the Western Han are on display in the fifth and sixth exhibition halls. They are arranged in formation. The mock army is more than 2,000 years old.

Travel: The address is 53 Zhongshan Road in Xianyang. Take Bus No. 59 to Xianyang from Xian. In Xian, you can travel on Bus No. 7, Bus No. 19, or Bus No. 24 to the Bo Wu Guan Bus Stop. You can also take a taxi. "Bowuguan" means museum in Chinese. The Xianyang Museum is in the Weiyang District that is about 33 kilometers or twenty miles west of the Xincheng District of central Xian where the Xian Train Station is. China Highlights can help you design a trip to visit Xianyang Museum and other highlights in the area.