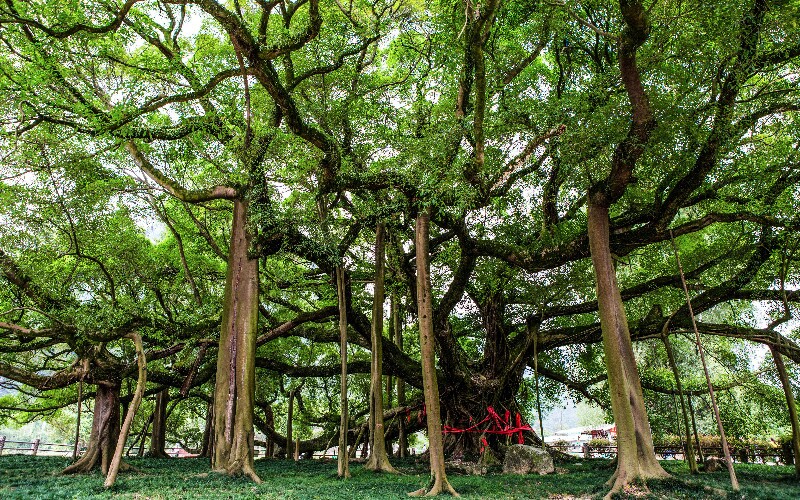 Located at Gaotian Village, seven kilometers south of downtown Yangshuo, the Big Banyan Tree Park is one of the main attractions on the "Ten Miles Gallery". This huge banyan tree is now 17 meters high and hasa width of 7 meters. The local people have said that it has survived over the centuries,ever since it was planted during the Sui Dynasty (581-618). In this respect, the tree is as old as Yangshuo County.

When looking at the towering banyan tree from afar, it is just like a huge green umbrella. The branches and leaves are so lush that the sunshine can hardly penetrate them. In summer time, people like to sit in its shade and have a breakfrom the hot day. The big banyan tree is also famous because the Chinese film Liusanjie was partly filmedthere. In the film, the heroine - Liusanjie - showed her deep love forthe hero, A'niu, under this big banyan tree and passed an embroidered ball to him as a token of love. Finally, Liusanjie and A'niu lived a happy life. This scene in the film has attracted lots of young couples to visit the Big Banyan Tree Park to make wishesof love. According to the traditions of the Zhuang People, in ancient times, the Zhuangs believed in nature. They regarded animals, plants and mountains as gods. The 1,400-year-old banyan tree was treated as a god among the Zhuangs. Every year,many domestic tourists visit there to worship this ‘god tree'.

Location: In the middle of "Ten Miles Gallery",seven kilometers south of downtown Yangshuo
Opening hours: 7:00 am - 6:30 pm
Transportation:
Minibus: There are minibuses operating from Yangshuo Bus Station to Gaotian Village every 15 minutes. You can geton the bus and tell the driver your destination then the bus will drop you off at the Big Banyan Tree Park. The ride willcost 3 yuan each way. On your way back, just wait for the bus where you had been dropped off.
Bike: The local government constructed a bicycle path for visitors to enjoy the natural scenery on the way to the hill. Riding from downtown Yangshuo to the Big Banyan Tree Park takes about half an hour.You can rent a bike in front of West Street with a price of between 10 to 30 yuan per day.

yangshuo Yangshuo Travel Guide - How to Plan a Trip to Yangshuo