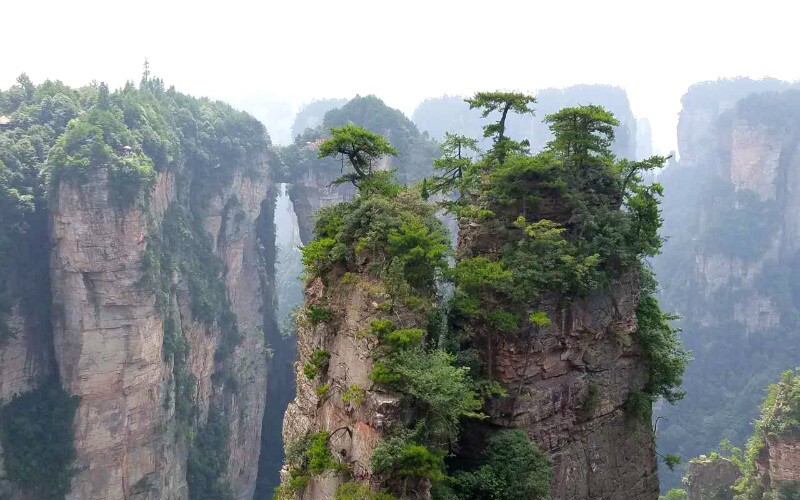 Zhangjiajie and Avatar: How Far Off Is Pandora?

Hallelujah Mountain: named after the floating outcrops of Pandora, as its middle is often lost in cloud

Zhangjiajie National Forest Park is often said to have inspired the 2009 film release Avatar, but how similar is Zhangjiajie to Pandora?

Apart from its fame as a result of Avatar, Zhangjiajie National Forest Park inside Wulingyuan Scenic Area is also famous for being one of China's most breathtaking national parks. In true Pandora style, it combines over 3,000 towering sandstone pillars and rich (but not so scary) wildlife with lush vegetation and tranquil streams. As a result of its uniqueness, it was added as a UNESCO World Heritage site in 1992.

The park is worth visiting if you are into the outdoors, love taking photographs, or are adventurous. It isn't for nothing that the sandstone pillars were the inspiration for the floating mountains in the movie Avatar...

One of the main spots in the park, Avatar Hallelujah Mountain, in particular was film director James Cameron's inspiration for Pandora's mountains at the time artists were putting together the magical land as seen in the film.

This mountain was initially actually called "Southern Sky Column," or "Southern Pillar of Heaven" (translations here differ) but changed its name after the movie was released in order to reflect the impact it had on the film's landscapes.

At one of the Halleluyah Mountain viewing points, there are lifesize Na'vi and Ikran models. There are also lifesize Na'vi models on the roof of a restaurant near the attraction and billboards and banners with an Avatar theme in the area. While this corner of the national park is well short of becoming an Avatar theme park, the association with the movie is unmissable.

As a result, Hallelujah Mountain is now one of the most popular spots in Zhangjiajie National Forest Park to visit, and is extremely busy.

The best way to see it is to get on the bus from the eastern (main) entrance of the park to Bailong Elevator. From high on an opposite mountain (the glass elevator takes you there!), you can walk to viewpoits and get an amazing picture of it.

After the release of the film, the municipal government of Zhangjiajie changed the slogan of the park to "Pandora is far but Zhangjiajie is near" in order to boost the perceived relationship between the two.

However, much of the talk connecting Zhangjiajie and Pandora has also concerned Pandora's fictional alien Na'vi people, who were being displaced from their land in order to boost Pandora's economic growth. (Zhangjiajie, like Pandora, has its own conquered and assimilated native people, the Tujia, who like the Na'vi have a tradition for being warriors.) Parallels were drawn between Chinese people being evicted or being moved around by infrastructure planners boosting China's economy.

This is a topic frequently discussed in the media, as a result of consequences coming along with China's unparalleled economic growth, with many 'regular' Chinese citizens feeling forgotten or sacrificed in the name of the greater national good.

Similar parallels are sometimes drawn between Pandora and Zhangjiajie's biodiversity: will economic growth and urban expansion in combination with boosting tourism mean the end for the rich flora and fauna of the area? Many already worry that the huge tour groups visiting the same spots in Zhangjiajie National Forest Park are negatively impacting the park and its surroundings.

The Rapid End of Avatar in China's Cinemas

As a result of the above parallels drawn between reality and the film, the China Film Group actually pulled Avatar off screens after having been in China's cinemas for 14 days to avoid further controversy.

However, censorship didn't stop it from breaking records and being the highest-grossing film in Chinese cinemas at the time, coming in at a whopping 202 million USD after just these two weeks.

Touring Zhangjiajie with Us

None of the above means that you should not visit what is essentially a once-in-a-lifetime destination as long as you leave only footprints behind, and take only memories with you.

We've got plenty of Zhangjiajie tour itineraries at the ready. And of course, our tours can be tailored to your needs. Please contact us here if you've got any special requests or requirements.