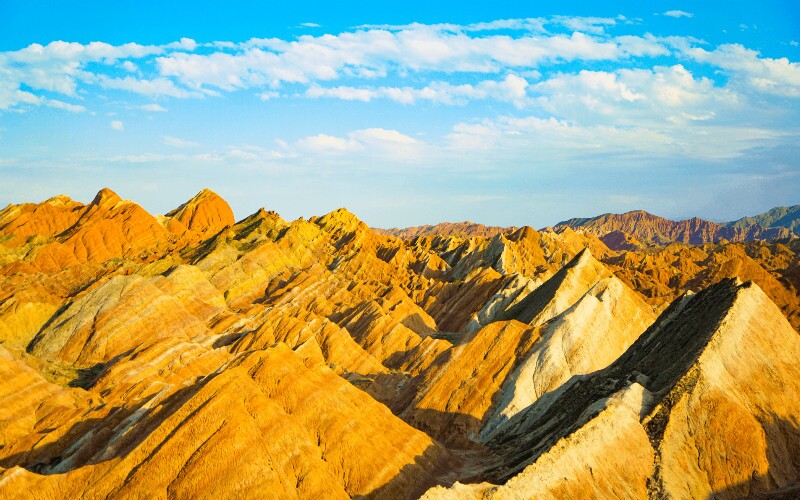 Zhangye Transportation — How to Get to/around Zhangye

Although Zhangye’s transportation is far behind major cities’, like Beijing and Shanghai, it is still easy to reach, both by airplane and train.

Read on to find out about how to get to/around Zhangye.

Getting to Zhangye by Air

No international flights are available yet.

From the airport to the downtown area, it’s about 35 minutes’ drive (25 km). There are shuttle buses running between the airport and downtown stops, costing 20 yuan per person. Alternatively, you can choose a taxi.

Getting to Zhangye by Train

Xining, Xi’an, and Urumqi have bullet trains to Zhangye West Railway Station, taking about 2, 7½, and 7½ hours respectively. High-speed trains are the most convenient way to travel between Zhangye and other cities in Gansu such as Lanzhou (4–4½ hours), Jiayuguan (1½ hours), and Dunhuang (4–4½ hours).

Getting to Zhangye from Major Cities

For travelers from cities far from Zhangye, like Beijing, Shanghai and Guangzhou, we recommend flying. If there is no flight to Zhangye from your city, we suggest flying to Lanzhou (or somewhere else mentioned above) first and then taking a flight or bullet train to Zhangye.

For those traveling from cities near Zhangye, such as Xining, Lanzhou, Dunhuang, and Jiayuguan, we recommend high-speed trains.

If you have any questions or difficulty in arranging transportation to Zhangye, you can contact us.

Flying from Beijing to Zhangye is recommended. Most flights need to transit in Lanzhou, the fastest of which takes about 5½ hours. There are a few direct flights, taking about 3 hours.

Alternatively, you can choose an overnight train. There are 3 overnight trains running from Beijing to Zhangye, taking 18½–28 hours. They arrive at Zhangye early in the morning or late at night, which is inconvenient. We don’t recommend them.

There is a direct daily flight from Xi’an to Zhangye. The journey takes about 2 hours. Flying is recommended.

As for trains, four bullet trains run between the two cities, taking about 7 hours.

Xining is close to Zhangye so there is no flight between the two cities.

Traveling by bullet train is the best way. There are 12 daily high-speed trains traveling from Xining to Zhangye. The journey takes about 2 hours.

Lanzhou is the transportation hub of Gansu. It is very convenient to travel from Lanzhou to Zhangye. There are one or two direct flights to Zhangye every day. A flight takes about 1 hour.

If you want more freedom to choose your departure time, taking the bullet train is recommended. There are 12 bullet trains running between Lanzhou and Zhangye. The journey takes about 3½ hours.

Dunhuang has no direct flight to Zhangye. You should transit in Lanzhou. So we don’t recommend flying.

There is no flight between the two cities.

Taking a bullet train is the best way. 10 bullet trains run from Jiayuguan to Zhangye every day, taking about 1½ hours.

Because Jiayuguan is close to Zhangye, you can also choose to take a taxi or hire a car. It’s about 2½ hours’ drive.

Zhangye is not a big city. Public buses and taxis are the main ways to travel around Zhangye city.

Some major attractions are far from the downtown area, such as Zhangye Danxia Park which is not accessible by public buses. So, for travelers, we recommend booking a private tour. With a private vehicle, the trip will be more efficient, convenient, and comfortable.

Getting to Zhangye Danxia National Geological Park (on Your Own)

There is no public bus to Zhangye Danxia Park. You can go to Zhangye Bus Station and take a tourist bus there bound for Danxia Park. Alternatively, you can choose a taxi.

Tour Zhangye with Us

With rich experience in designing and arranging Zhangye tours, our travel experts can help you with professional suggestions in selecting the best means of transportation and arranging an itinerary to make your trip smooth and comfortable.

If you’re ready to tell us your ideas for a Zhangye tour or make an inquiry, contact us.