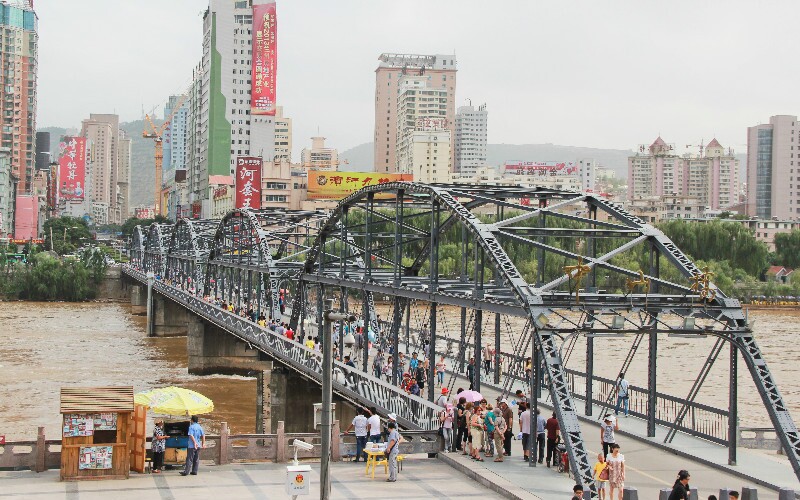 Lanzhou Travel Guide - How to Plan a Trip to Lanzhou

Lanzhou is the capital of Gansu Province. About 3.2 million people live in the urban area. Lanzhou was an ancient city on the ‘Silk Road’ trade route between Europe and China because it is at the entrance of a lowland corridor called the Hexi Corridor. On either side of this big long valley, there are high mountains, deserts and plateaus that blocked travel to the north and south. The people benefited from the trade through the area, and they were influenced by Western ideas and religions.

In and around Lanzhou are ancient Buddhist temple sites and shrines. Now, Lanzhou has a large Muslim minority of about 9% of the population. The city is an important transportation hub. The legacy of centuries of travel and trade on the Silk Road are the Bingling Temple Grottoes near Lanzhou and ancient temples and fortifications in the Hexi Corridor, and the modern city of Lanzhou offers the Gansu Provincial Museum as a travel highlight and modern facilities for a Silk Road tour.

On and off for about 1,600 years after 100 BC, the Silk Road through the Hexi Corridor and Lanzhou was an important trade route. For centuries, between the Chinese empires and kingdoms in the Far East and the empires and kingdoms to the west, the quickest and safest overland route north of the Himalayan mountains passed through the town of Dunhuang at the western end of the Hexi Corridor, though the Hexi Corridor passage, and then on to Lanzhou. The Hexi Corridor is about 1,000 kilometers long, and the towns and rivers were used by traders, troops and travelers. On both sides of this corridor is inhospitable terrain. To the south are the Qilian Mountains and the Tibetan Plateau, and to the north are the Beishan Mountains and the Gobi desert. For going between the West and China, the big, long valley was one of the two main land routes. The other route called the Southern Silk Road or the Tea Horse Road went through Yunnan in the far southwestern corner of China. For the capital cities of China’s large dynastic empires at Xi’an and Beijing and for the populous northern provinces, the Hexi Corridor and Lanzhou were vitally important for trade and contact with the West.

One of the legacies of the Silk Road is the Bingling Temple (Thousand Buddha Caves) that are one and a half hours southwest of Lanzhou. The first frescoes were carved during the 4th or 5th centuries AD. Carving and excavating continued for about 1,000 years. There are more than a hundred caves and hundreds of carved figures. Some are quite big. A famous one is more than 27 meters tall and is similar in style to great Buddhas that were carved in Central Asia.

The history of Lanzhou is tied up with the Silk Road. The Han Empire (206 BC – 220 AD) rulers wanted trade and allies and sent Zhang Qian as an emissary to western countries two times about the year 100 BC. He had very long and adventurous journeys that included being captured for 10 years and escaping. The Han rulers sent a big embassy with him with trading goods, and they interested the countries to the west with trade with China. Silk was the most prized Chinese product, and the Chinese wanted big horses and manufactured products such as glass articles.

Along with the goods, ideas traveled with the people on the caravan routes. Western ideologies greatly affected the Chinese Dynasties. It is said that a Han Emperor named Mingdi had a dream of a golden figure, and his advisers said that the figure was the Buddha who was the god of the West. In 68 AD, Mingdi sent Cai Yin to Central Asia to learn about this religion. The main religion of Central Asia was Buddhism. Cai Yin brought back Buddhist scriptures and two Buddhist monks. Buddhism became popular, and people built the big ancient Buddhist temple sites associated with the Silk Road at the Bingling Grottoes, Mogao Grottoes and the Zhangye Giant Buddha Temple during the next thousand years. The Western influence can be seen in the style of the ancient sites. The people near the Silk Road accepted Persian and Indian Buddhist teaching.

When Arabs attacked Central Asia in the 700s, Islam replaced Buddhism as the major religion. The Silk Road fell into disuse after the Tang Dynasty fell in the year 907. Then Mongolians conquered China and most of Asia and established the Yuan Dynasty (1279-1368) in China. They brought Muslims from Persia and Central Asia to China. Many Mongolians converted to Islam.

Best time to go: The best time to go is between April and September when it is warm. There isn’t much rain during any month. Even in the summer, a jacket may be necessary.

Altitude and Pollution: The altitude is 1,500 meters or almost 5,000 feet. This is almost a mile high, like the altitude of Denver, Colorado. Lanzhou is one of the world’s smoggiest cities. If you suffer from asthma or high altitudes, it would be good to spend only a short time there. There is also a lot of dust in the air sometimes.

Jiayuguan Pass, the western end of the Great Wall of China

The main ancient attraction near Lanzhou is the Bingling Grottoes. Another is the White Pagoda park area. Following the Silk Road going westwards in the Hexi Corridor, there is the city of Wuwei with the Confucian Temple complex. Further west is the city of Zhangye near the Giant Buddha Temple. Next there is the Jiayuguan Fort that guarded the western border of China at the narrowest point of the Hexi Corridor called the Jiayu Pass. The city of Dunhuang is at the western end of the valley and was also the end of the Great Wall of China that once stretched all the way from Beijing. Near Dunhuang are the Mogao Grottoes that are sometimes called the "One Thousand Buddhas Caves.” It is a UNESCO World Heritage Site and is said to be among the largest and best preserved Buddhist grottoes in the world. Much of the area is closed off though. The ancient sites in the Hexi Corridor mainly relate to the Silk Road era. The Silk Road breaks into three branches at Dunhuang, and Turpan, Urumqi and Kashgar are travel highlights further west.

Lanzhou Things to Do