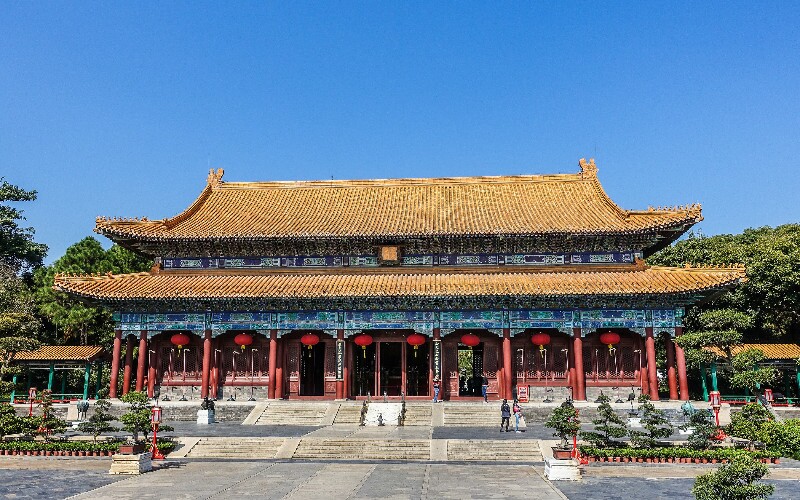 Built of the same size as the burned down Summer Palace in Beijing, the New Summer Palace in Zhuhai reflects numerous scenic spots with its old construction style combined with modern features.

The New Summer Palace is located at the foot of Shilin Mountain on Jiuzhou Avenue in Zhuhai City. Covering an area of 1.39 square kilometers, the Palace is surrounded with green mountains on three sides, and Fuhai Lake covers 80,000 kilometers. The total investment during the first phase of construction was more than 600 million yuan. The New Summer Palace is one of the first 4A level scenic areas in China.

The Palace, which incorporates a classical royal palace complex, a classical garden building on the Yangtze Delta and western style buildings, reproduces the elegance and talent of the flourishing age of the Qing Dynasty. The west side of the Palace contains western style buildings of unique noble disposition. The white marble walls and the exquisite decorations of the interior hall make you feel as if you were in an ancient European palace.

Scenic areas, such as the Justice and Honour Hall and Jiuzhou Qing Banq, and the scenic area of the Jiuzhou palace banquet of the Qing Dynasty, have a solemn and square layout, displaying the imposing air of the royal family or the refined disposition of the beauties in the harem of the Qing Dynasty. The yellow glass used is energetic and graceful; the green glass instills life; the purple glass repels ghosts and evil spirits.

Performances in the New Yuanming Palace include the following.

The grand Qing Dynasty: Performed in the central opera house of the New Summer Palace every night at 7:30.

The ceremony in the Qing palaces: This ceremony reflects the resplendent, huge and spectacular scene in past palaces of the Qing Dynasty. The grand and solemn throne-ascending ceremony and the bold and elegant court dances immerse tourists in the grandness of the past. Meanwhile, tourists also get a view of the extraordinary style of the flourishing age of Emperor Kangxi and Emperor Qianlong of the Qing Dynasty.

Selected action scenes of the Beijing opera: As one of the three quintessences of China, scenes of the Beijing opera as played on the stage of the Qingyan Garden in Jiuzhou provide traditional and excellent Beijing Opera highlights. These performances highlight episodes such as "The Crossroads", "Stealing Immortal Herbs", "Wu Song Passing the Inn at the Shizipo Slope" and ”Uproar In Heaven", among others – all of which are sure to win your praise.

Bell set chime dances: The dance had been put on in the palaces as early on as the Shang and Zhou Dynasties. The performance on the Qionghua Tower is refined and is based on the characteristics of the classical dances of China. They not only possess the characteristics of the ancient palaces, but also display the eclecticism, broadness and profoundness of the Chinese music.

Manchu flavor: Manchu is an ethnic nationality that not only excels at riding horses and shooting, but is also good at singing and dancing. Her dances have rugged boldness reflecting strong rhythms, as well as graceful expressions of gentleness and loveliness. The content of these dances mostly demonstrates the victory of battles, the abundant harvest in hunting and collecting and the innocent love of young females.

Emperor's Wedding Ceremony of the Qing Dynasty: This performance displays the humorous scene of the Emperor choosing imperial concubines at a wedding ceremony, and has credulous plots and exaggerating techniques, delicate backgrounds and rich dresses.

Emperor Qianlong's tour around Fuhai: An ancient floating landscape reproduces the scene of the Emperor Qianlong paying visits to the Yangtze River Delta and sharing enjoyment with the people. It reproduces through the sound of gongs and drums the flourishing age when Emperor Qianlong visited the Yangtze River Delta. Going hand in hand with a "phoenix boat" full of tourists, the "dragon boat" composed of the Emperor, the Empress, princesses and maids edged away from the shore and set sail in a prosperous, peaceful and happy atmosphere.

Emperor Ascending the Throne: This is the most significant ceremony in the palaces of the Qing Dynasty, and it symbolizes the ending of the old rulers and the beginning of the new rulers taking power. The grand throne-ascending ceremony is very solemn with a large guard of honor contingents displayed on both sides of the grand hall. Although only a display, it shows the solemnity of the ceremony. At the end of the grand ceremony, the ceremony of issuing the Imperial Edicts is held where the new emperor issues administrative programs and a Bill of Oblivion to show that he will follow the will of the heaven and govern the country. The ceremony immerses tourists in the experience and gives them a look at the extraordinary style of royal ceremonies of the past.