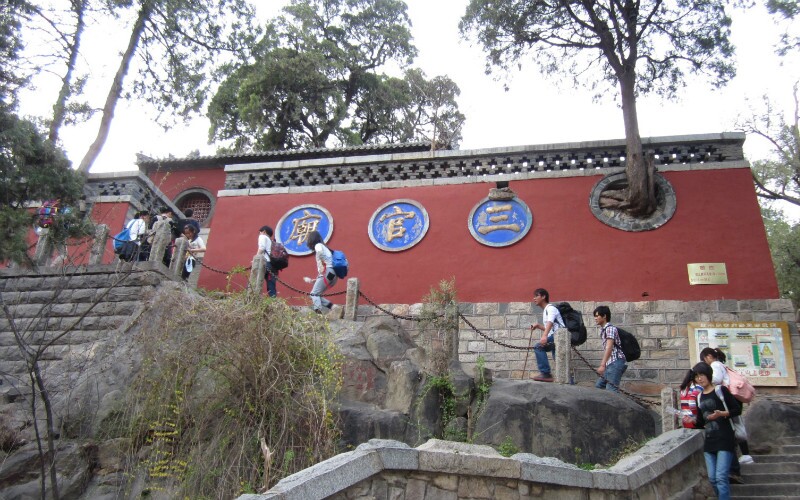 The Top 7 Things to Do in Zibo in Shandong

One of China's inland eastern cities, Zibo (淄博 Zībó /dzrr-bor/) is getting more popular with foreign tourists. As of 2016, it is ranked 52 on TripAdvisor. What makes Zibo stand out are the ancient remains of prior empires and states and good natural mountain parks surrounding it. Here are our top 7 recommended tourist places:

1. Shop At and Sightsee Around Zhou Ancient City

The city's most popular foreign tourist attraction (according to TripAdvisor 2016) is a shopping and sightseeing area where old buildings and narrow streets have been preserved. The tourists like it for a convenient place to shop, get souvenirs, and eat in an "old China" setting in Zibo.

2. Hike and Sightsee on Mount Tai

Mount Tai has numerous old temples and structures along with many waterfalls.

Mount Tai or Tai Shan (泰山 pinyin: tài shān) is about two and a half hours by road from Zibo. It is the second most popular place to go from Zibo according to TripAdvisor in 2016.

Mt. Tai is famed in China as a sightseeing and hiking mountain, but compared to other mountains in China like the Yellow Mountains, it is less visited. This might be because the stair climb to the top is quite steep. From bottom to top, it rises about 1,400 meters. A major highlight is the view of the Yellow River from the top. Read more>>

In the summer, this scenic area's (鳶山 in Chinese, Yuānshān, Kite Mountain) verdant vegetation is one of the highlights. Another draw is the view of Baoshan district and the plain of the city from high above.

A big red bell is near the peak, and past it, the hiking is a little rougher over dirt path and stairs. People can also drive up to the big bell, and park there. A lot of trees overhead makes the hike shady. Travel is easy since it is actually in the city in Boshan District.

Lushan National Forest Park is out in comparative wilderness almost two hours south of Zibo and distant from other urban areas. The result, in this case, is a park that is more like a natural park in the West. It isn't built up. Just forest with a wilderness feel.

Qi Great Wall Ruins (齐长城遗址) is the historical highlight. It is said to be the first "Great Wall" built in 685 BC by the kingdom of Qi.

This large museum is popular with foreigners because it is large and because it is near about seven other museums you can see in the same area including the Zibo City Museum. It features Chinese and international (Korean and Japanese particularly) ceramics and modern ceramic art. It is said to be China's largest ceramics exhibition center

There are a large collection of pieces and some rare antiques. English signs helps foreign visitors. It is in the central city and nearby other museums making it a convenient trip.

This museum (齐国历史博物馆) would interest those interested in history. The Qi State was a trend setter for the countries around, and the capital was near Zibo. It was the leader technologically, economically and in the development of Confucianism. It was the richest country in the region, and the capital, Linzi, was the biggest city in East Asia. This is the best museum in the area to learn about the state.

Understanding about that state helps to understand the origins of the later large empires in the region. They built the first "Great Wall" in the region that traverses Shandong to Qingdao, and they built the Jixia Academy that is called the world's or at least East Asia's first university. In a way, the Qi State's significance to China is like that of ancient Greece to Europe.

The museum is built on or near the site of this university where the first Confucian teachers developed the religion and philosophy. Zibo is near the ancient Qi capital remains. It is about a 45-minute drive from central Zibo out to the museum in Linzi District.

Some foreign tourists come here, but it isn't a place to go unless you are interested in the history of ancient chariots. About 20 years ago, workers constructing a road found this Qi king's tomb. In it, there was a cart with the skeletons of many horses. It isn't actually a chariot.

The museum is meant to instruct mainly about the history of chariot and cart technology in the region. It has models and replicas of carts and chariots in the museum to see along with a lot of signage in Chinese and some in English to read. Almost none of the chariots inside are real. They are replicas. It isn't really worth a visit unless you are driving by. The Qi state was powerful at the time, and it was known as the 'country of one thousand chariots.'

Travel: It is about a 20 minute drive from the Qi State Museum.

The recent completion of bullet train lines that connect Zibo with Jinan, Qingdao, and Beijing is spurring more tourism. Zibo is about 2 hours and forty minutes from Beijing and about 2 hours from Qingdao. Along with the above, star attractions in Shandong include Qufu — Confucius' home town and enchanting coastal cities like Penglai.

Most tours won't take you to the Qi "Great Wall" ruins or the parklands around Zibo, but our Shandong area tours are customizable.