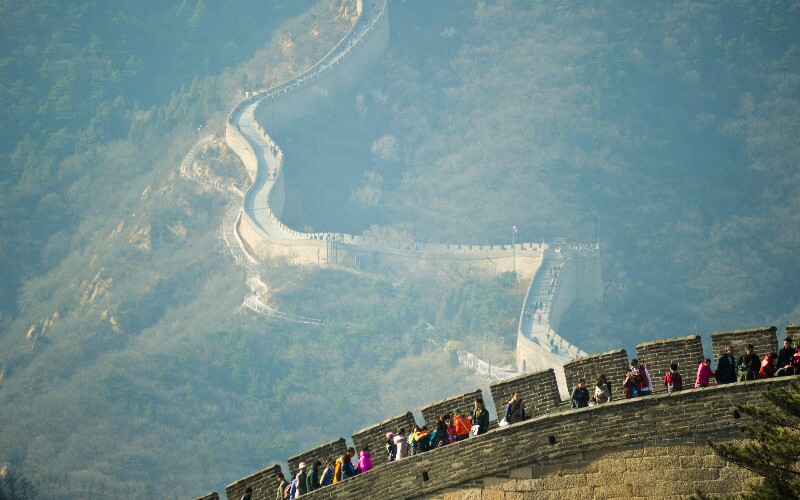 If including inter-state sections, those not protecting the northern border of China, the oldest existing section of the Great Wall of China was the Qi State "Great Wall".

It stretches for over 500 kilometers (300 miles) from the Yellow River at Jinan eastwards to the East China Sea, almost dividing Shandong Province in half.

When It Was Built and Why

The "Great Wall" of the Qi State was initially built around 650 BC, and expended during the Warring States Period (475–221 BC).

Before the Qi State Wall was built, natural barriers, i.e. rivers and mountain ranges, formed the only defensible boundaries between territories as barriers against enemies, while some defended against opponents by using the natural mountains.

The State of Qi built its Great-Wall-esque military barrier along its southern border to prevent attacks from the State of Lu and the State of Chu.

The "Great Wall" of the Qi State made use of the local topography and materials.

Walls on Plains and Small Hills

The wall was built 20–30 meters (66–98 feet) wide and 7–8 meters (23–26 feet) high on the plains and hills, using local yellow loess, clay, and sandy soil. Saltwater was applied to the soil to aid binding, and salt leaching is still visible.

Stones were piled 5–7 meters (16–23 feet) high along more vulnerable mountain ridges with parapets walls both sides. These walls were filled with local soil and rocks, including granite and limestone.

The Qi State "Great Wall" winds its way among 1,518 undulating peaks, from Yellow River to Pacific Ocean, running west to east across 19 counties of Shandong Province:

The Changqing Section of the Qi "Great Wall"

In Jinan Prefecture, the Changqing (长清) section of the Great Wall is 98 kilometers (61 miles) long and runs across 294 mountain peaks.

The Laiwu Section of the Qi "Great Wall"

The Yongquan Section of the Qi "Great Wall"

'Qi Great Wall Remains Protection Park' is at the top of 'Splitting Mountain', and it boasts the most complete Qi State "Great Wall" remaining. The major attractions are the ancient remains of the Qi State Wall, 'Splitting Mountain Pass Fort', the beacon towers, 'One Line Sky', and 'Heart-Linking Bridge'.

The Yishui Section of the Qi "Great Wall"

Running across the picturesque Yishan Mountains (in Weifang "Kite City" Prefecture) and five villages and towns, the Yishui section of the Qi State Wall is 140 kilometers (87 mile) long.

It winds its way south to Yishui County (沂水县) from Taibo Peak in the Yishan Mountains. 85% of which is dotted with historical remains, including ancient castles, beacon towers, and 'General Appointing Platform'.

The Wulian Section of the Qi "Great Wall"

In coastal Rizhao Prefecture, the Wulian section of the Qi State Wall was 50 kilometers (31 miles) long. It started at Hexi Reservoir, Wanghu District in the west, and ended at Wulian County (五莲县), running across Xumeng, Songbai, and Hubu villages, two rivers, and hundreds of mountain peaks along its way.

Only two sections of "Great Wall" relics remain in Rizhao after 2,300 years: Xiling in Xumeng Town and Changchengling in Songbai Village.

Build "the Ancient Great Wall" into Your Shandong Tour

Most tours won't take you to the "Great Wall" relics, but our tours are customizable! Tell us your interests and requirements and we will tailor-make a Great Wall tour for you.