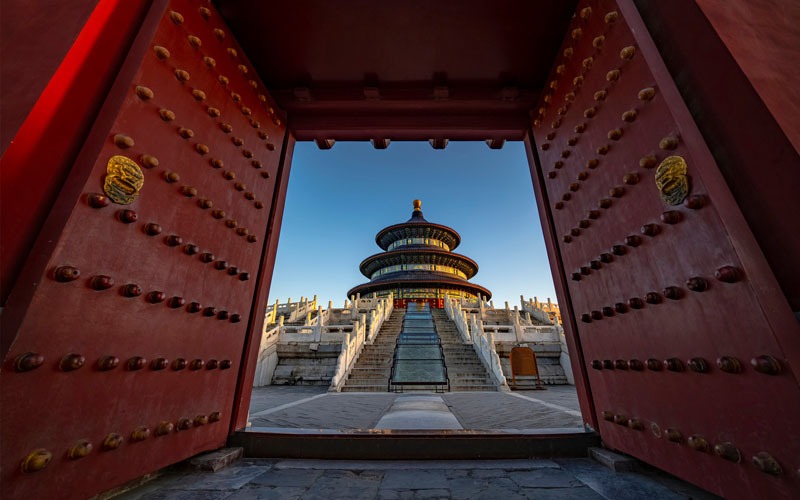 As the largest of Beijing's imperial of religious building complexes, the Temple of Heaven is known for its rigorous symbolic layout, peculiar structure, and magnificent decoration. It is the most representative example of Chinese ritual architecture. Emperors of the Ming and Qing dynasties (from 1420 to 1900) worshiped the god of heaven and prayed for good harvests there.

The Temple of Heaven is located south of the Forbidden City. The total area of Temple of Heaven Park is about 2.73 km2 (1.05 sq mi). That's a similar size to Central Park in New York or twice the size of Hyde Park.

The design of the main buildings is a combination of circles and squares, which symbolize the belief that Heaven is round and Earth square.

In ancient times, people could not scientifically understand and explain a variety of natural phenomena, such as the movement of the sun and the moon, the cycle of the four seasons, thunder, wind, rain, earthquakes, and tsunamis. They believed that these phenomena were governed by "Heaven", so they worshiped the "Emperor of Heaven".

To better earn the respect of the people that was needed to govern and regulate them, Chinese emperors call themselves the “sons of Heaven”. They also claimed that Heaven authorized them to govern the Earth (China). So, emperors in each dynasty regarded offering sacrifices to Heaven and Earth as very important political activities.

The Temple of Heaven was the outcome of the combination of the dynastic regime and Confucian theocracy.

The temple complex was initially built in 1420, during the Yongle Emperor’s (third emperor of the Ming Dynasty’s) re-establishment of Beijing as China’s capital (Europe was also having its own Renaissance at the time).

The Hall of Prayer for Good Harvests was the main building at that time, where the Yongle Emperor held sacrificial ceremonies to worship both Heaven and Earth.

In 1530, according to China's traditional idea that the Earth is square and Heaven round, the Jiajing Emperor (eleventh emperor of the Ming dynasty) took his minister’s advice: “Heaven and Earth should be worshiped separately. Worship Heaven at a circular altar and Earth at a square altar.”

He ordered the Circle Mound Altar built south of the Hall of Prayer, and the Altar of Earth built outside the Gate of Andingmen in the north of Beijing city. The Heaven-worship part of the temple complex was officially renamed the Temple of Heaven in 1534.

During the reign of the Qianlong Emperor (the sixth emperor of the Qing Dynasty’s reign was 1711–99), the Temple of Heaven underwent large-scale renovation. Some of the main buildings’ glazed tiles were replaced, the size of the Circular Mound Altar was expanded, etc.

In 1900, the temple complex was used as a temporary command post by foreign allies to defeat the Boxer Rebellion. Parts of the buildings were destroyed, and the temple fell into neglect.

In 1918, the temple complex area was turned into a park and opened to the public.

The Grand and Mystical Architecture of the Temple of Heaven

Internal structure of The Hall of Prayer for Good Harvests

The design of the Temple of Heaven complex, true to its sacred purpose, reflects the mystical cosmological laws believed to be central to the workings of the universe.

Both the overall arrangement and the buildings themselves reflect the perceived relationship between Heaven and Earth, the core of Chinese cosmology at that time. Much numerology, symbolizing Chinese beliefs and religion, operates within the Temple of Heaven’s design.

The most striking building of the Temple of Heaven is the tall, circular Hall of Prayer for Good Harvests, in the north of the park. In the south of the park lie the Imperial Vault of Heaven and Circular Mound Altar.

The Hall of Prayer for Good Harvests (祈年殿 Qínián Diàn ‘Pray-Year Hall’) was built in 1420, which makes it the earliest building of the Temple of Heaven complex. It is one of the world’s largest medieval wooden structures: 38 meters (125 ft) tall and 36 meters (118 ft) wide, built completely without nails.

In 1545, the Hall of Great Sacrifice was remodeled to be a circular, wooden hall, standing on a square yard, which represented the philosophy of ancient China’s key elements: roundness representing Heaven, and squareness representing Earth.

In 1751, (during the reign of Qianlong), the color of the three-tiered roof was changed to blue (blue means the blue of the sky or Heaven). It was also renamed ‘The Hall of Prayer for Good Harvests’, as then it was dedicated to praying for good harvests alone.

The Circular Mound Altar (圜丘坛 Huánqiū Tán ‘Encircling Mound Altar’) was built in 1530 by the Jiajing Emperor. The Altar is a three-layered altar made of marble, it was enclosed by two sets of walls that are square outside and round inside.

In ancient China, nine was considered to be the most powerful number (representing eternity), so the slabs forming the Circular Mound Altar were laid in multiples of nine.

The yearly winter solstice ceremonies were held there.

The center of the altar is a round slate called the Heart of Heaven (天心石 Tiānxīn Shí ‘Heaven-Heart Stone’), where the Emperor prayed for good weather. There is an interesting fact about the Heart of Heaven: due to the special design of the Altar, when you shout at the Heart of Heaven, there is a significant echo from the round wall around you, just like hundreds responding to a single call.

The Imperial Vault of Heaven

The Imperial Vault of Heaven

The Imperial Vault of Heaven (皇穹宇 Huáng Qióngyǔ ‘Imperial Dome-Room’) was dedicated to housing ‘God’s Tablets’ — stone tablets used in the harvest prayer ceremony. It is located between the Hall of Prayer for Good Harvests and the Circular Mound Altar.

Thanks to its excellent design, the Imperial Vault of Heaven is a wooden structure that didn’t need any nails. There are no beams inside the hall. The vast dome is supported by 16 wooden pillars and numerous brackets.

This Imperial Vault of Heaven is surrounded by a circular wall (the Echo Wall). Due to its smooth surface, sound can travel (reflect) large distances along the wall.

Sacrificial Ceremonies in the Temple of Heaven

Some ritual objects for Sacrificial Ceremonies

Chinese emperors were thought to be "sons of Heaven", revered as representatives of Heaven on Earth. Emperors regarded the sacrificial ceremonies at the Temple of Heaven as their most important religious and political activity.

To fulfill their responsibilities, three important sacrificial ceremonies would be held in the Temple of Heaven every year.

1. At the beginning of the lunar year (January or February):

In the first lunar month, the emperor would go to the Hall of Prayer to pray for a good harvest in the coming year.

The emperor would pray for rain at the Circular Mound Altar in the hope that Heaven would grant fair weather and a good crop yield.

The emperor would thank the God of Heaven for the harvest that year at the Circular Mound Altar. The winter solstice was considered the beginning of a new solar cycle, and it was an auspicious day.

The hall of fasting in the Temple of Heaven

Three days before the ceremony, the emperor with his officials and guard would move from the Forbidden City to encamp at the Temple of Heaven. The emperor would wear ceremonial robes and abstain from eating meat and drinking alcohol.

One day before, cattle were slaughtered and prepared as sacrificial offerings. There were as many as 700 utensils used for the rituals.

The ceremony was carried out with reverent attention to detail. It was believed that even a small deviation would incur the displeasure of Heaven in China.

Since the 19th year of the Ming emperor Yongle (1420), a total of 27 emperors worshipped in the Temple of Heaven.

Locals dance in the Temple of Heaven park

Although in imperial times the public was not allowed to enter the enormous park, now for a minimal fee everyone can enjoy it all day long.

Early morning is the best time to visit the Temple of Heaven. It is well worth waking up for: you will have an interesting experience watching local people doing morning exercises.

Next to an older person practicing the slow and flowing movements of tai chi, there might be a youngster performing vigorous kung fu punches and kicks. One group might be learning the ancient martial art of sword fighting, while another might be practicing a traditional dance.

Planning a Trip to the Temple of Heaven

Map of the Temple of Heaven

Temple of Heaven Park is suitable for visiting all year round.

Getting to the Temple of Heaven

For the East Gate: Take Line 5 to Tiantan Dongmen (‘ToH. East Gate’ 天坛东门) and leave from Exit A.

For the North Gate: Take Line 7 to Qiaowan (/chyao-wan/ 桥湾) and leave from Exit C.

By taxi (show one of these):

请带我去天坛东门 (Please take me to the Temple of Heaven’s East Gate.)

请带我去天坛南门 (Please take me to the Temple of Heaven’s South Gate.)

The most convenient way of getting to the Temple of Heaven is with a private transfer service. In this case, you don’t have to wait for a taxi, which can take a while during weekends and public holidays. Contact us and we can provide you with an experienced driver and comfortable vehicle, as well as an expert English-speaking guide if required.

Visiting the Temple of Heaven with China Highlights

The Temple of Heaven is a historical site that is rich in history and culture. It would be more interesting to visit it with a professional guide. Our excellent guide service has received many great reviews on TripAdvisor. We would be more than happy to tailor-make your tour.