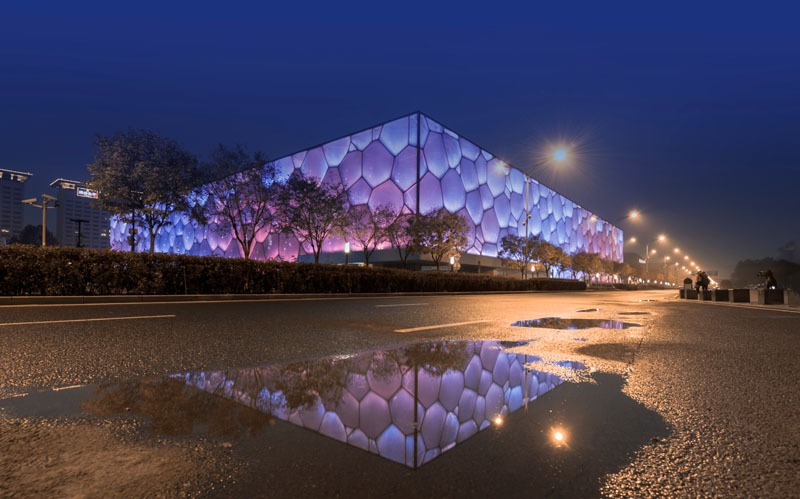 The Beijing National Aquatics, also known as Water Cube, was built as the main natatorium (swimming pool venue) for the Beijing 2008 Olympic Games and became known as one of the Games' iconic structures. Now it was turned into Ice Cube for the curling venue in the Beijing 2022 Winter Olympics.

It is located on Olympic Green, with the Beijing National Stadium (Bird’s Nest), on Beijing's north-south axis.

Who Designed the Water Cube?

The Water Cube in Beijing was designed by PTW Architects and Ove Arup. Their unique and inspired design, also called [H2O]3 projects, was based on the way soap bubbles come together in a 12- or 14-sided cell structure.

The surface of these “soap bubbles” reflects sunlight and makes the building a watery container glistening in the sunlight”, from which it got its nickname: The Water Cube.

Design Ideas behind the Water Cube

This seemingly simple "cube" was designed according to traditional Chinese culture as well as modern science and technology. Ancient Chinese believed that heaven was like a dome covering the square earth.

This philosophy was expressed in civilian buildings as well, especially in traditional Hutongs (quadrangle districts) in Beijing.

What is the  National Aquatics Center Made Of?

The ETFE membrane has a low mass, is tough, and can absorb sunlight with negligible deterioration. It doesn’t ignite spontaneously and has a wonderful self-cleaning function, due to its non-stick surface.

The material can't be stained by dust. When the wind blows, the dust blows away. In addition, the Water Cube also has an environmental function to collect and recycle rainwater.

Rainwater that falls on the Water Cube's roof is collected in a central storage pool below the building.

1. There are more than 3,000 “soap bubbles” on the outer wall of the Beijing National Aquatics Center.

2. It is the largest membrane structure in the world.

3. Its membrane does not need to be replaced if the soap bubbles are punctured. It can be restored with a heat welding repair/patch.

4. The soup-bubble-structure is also the biggest LED-façade building in the world with an electricity-saving (compared to non-LED lights) of around 550,000 kWh/year, which would cost US$70,000 per year.

5. The Beijing Water Cube is considered the fastest Olympic swimming pool in the world. During the 2008 Olympic Games, athletes broke 25 world records there.

6. Without lightning conductors, the Beijing Water Cube’s frame can conduct lightning to the ground safely.

7. The Water Cube has a flexible body that can resist an earthquake of magnitude 8. It is the most seismically-resistant (large) building in the world.

8. The National Aquatics Center covers an area of 3.2 hectares (7.9 acres), but it does not use a single steel I-beam or reinforced concrete column in the outer space frame.

9. The Beijing Water Cube has three huge swimming pools, from which more than a tone of water evaporates per hour.

What is the Water Cube Used for Now?

After a major transformation following the 2008 Beijing Olympics, the Beijing Water Cube was turned into a large water amusement park and reopened to the public in August 2010. It is now a multi-functional center for sports, recreation, and fitness.

Ice Cube for the 2022 Winter Olympics

In the 2022 Winter Olympic Games, the curling event will be held in the Beijing National Aquatics Center. The Water Cube is undergoing a magnificent transformation into the “Ice Cube”.

The Water Cube has been upgraded to include a curling rink while keeping its swimming pools. A new ice-making system is in place to provide an Olympic-standard curling sheet.

This makes the structure the only stadium in the world that can host both water and ice sports at the same time!

How to Get to the National Aquatics Center  in Beijing

By subway: Take Line 8 and get off at Olympic Sports Center Station. Use Exit B2.

By taxi: Show this phrase to the driver: “请带我去水立方”, which means, “Please take me to the Water Cube.”

Admission tickets to the National Aquatics Centre are sold at the ticket hall. If you have booked tickets online through any travel agent, e-tickets or e-voucher will be issued to you. At the counter ticket, just present a valid passport along with the voucher number to receive your paper entrance tickets.

Opening hours are subject to change. You could contact us to confirm before you go.

1. How much did the Water Cube cost?

2. Why was water cube converted into a water theme park after the Olympic Games?

After the 2008 Beijing Olympic Games, Water Cube was left unused and crumbling long. In order to attract more people’s interest, it was designed to a Water Theme Park. The water park covers 12,000 square meters outfitted with advanced water recreational facilities. You can easily fill the better part of a day here on the many different attractions including multiple speedy slides — fun for all ages.

3. What are the blue “Soap Bubbles “on the Outer Wall?

The shape of "Water Cube" looks like a blue water box, and the outer wall seems formed by irregular bubbles. The bubbles on the surface of the water cube are made of ETFE (ethylene tetra fluoro ethylene).

Come and Marvel at the Beijing Water Cube

Marvel at the super-modern Beijing Water Cube as well as Beijing's medieval wonders, maybe with an “Olympics tour”. Feel free to tell us your interests and requirements, and we will be glad to tailor-make a unique tour for you. You could look through our Beijing tours for some inspiration.