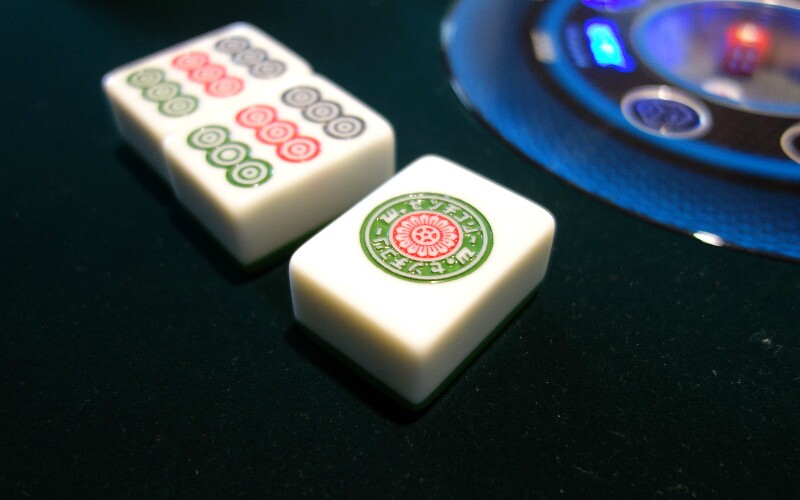 Chengdu is known as the leisurely city, and although Chengduites may seem to do everything lackadaisically there is one thing very serious going on in Chengdu: Sichuan majiang (mahjong).

On every block of Chengdu and around every corner you'll be able to find inexpensive tea houses to pass night and day playing majiang and sipping tea. In Chengdu, Sichuan majiang is played religiously.

So what makes it so attractive?

And how do you play?

First you'll need to familiarize yourself with majiang tiles. There are three suits. In each suit there are tiles from one to nine, and each tile has a set of four identical tiles. The three suits are "sticks" (tiao), "cookies" (bing), and "characters" (wan).

The Object of the Game

At the beginning of the game the pieces are shuffled and stacked into lines; nowadays usually done with a machine. Everyone rolls the dice to decide who goes first or the winner of the last round goes first.

Each player pulls tiles four at a time until you have twelve tiles. Then whoever started takes two tiles (jumping over one tile) and everyone else takes one tile. Watching another table of players do this once will be enough to understand how it works.

Choosing a Suit and Discarding Tiles

Take a look at your hand, you must choose only two suits to go for and discard all of the tiles of the third suit. For example, maybe you have seven "characters", three "cookies", and three "sticks" (see image below). In this case you'll need to decide whether you like sticks or cookies, but once you choose to discard a certain suit there is no going back. If you choose to discard cookies then every time you get a cookie you'll just discard it even if that is the only suit you draw for the rest of the game.

For the first round everyone decides which tile to discard first and places it face down on the table (this levels the playing field a little because everyone needs to decide which two suits to go for before seeing which suit the other players are discarding). After everyone does this the person who started reveals the discarded tile and the next player takes a tile and reveals his or her discarded tile. In the next round it is simply take a tile, discard a tile.

If you have two tiles that are the same then you can "peng" when someone discards the third one, take the discarded tile and show everyone your three of a kind (if you have three of a kind and see the fourth one then it is the same rule, but say "gang"; it counts as a set of three). This gives you a set of three and then play continues from you (discard a tile and your turn is over).
As far as runs are concerned you'll need to hope that you are lucky enough to draw the tiles you need through the course of the game.

Usually you'll have thirteen tiles in your hand, but to win you'll need fourteen. If you are one tile away from winning this is called "getting off of the rickshaw" (xia jiao). If you draw a tile that will give you a winning hand or someone discards it you just take it. Place that last tile face up and the rest of your tiles face down. The other three players continue till the end.

Now here comes the exciting part! Usually majiang involves at least minor gambling. If when you won you took someone else's discarded tile then that person pays you one playing card (playing cards are like poker chips and you should agree on the value of each card, usually the value is from 0.5 RMB to 100 RMB).

If you drew your winning tile by yourself "zi mo" then everyone needs to give you one playing card. The same rules apply to the person who won second and third. There are also many special hands that give you multipliers, but you'll need to agree on those rules before you start playing because not everyone plays by the same rules when it comes to multipliers. Have fun and enjoy!