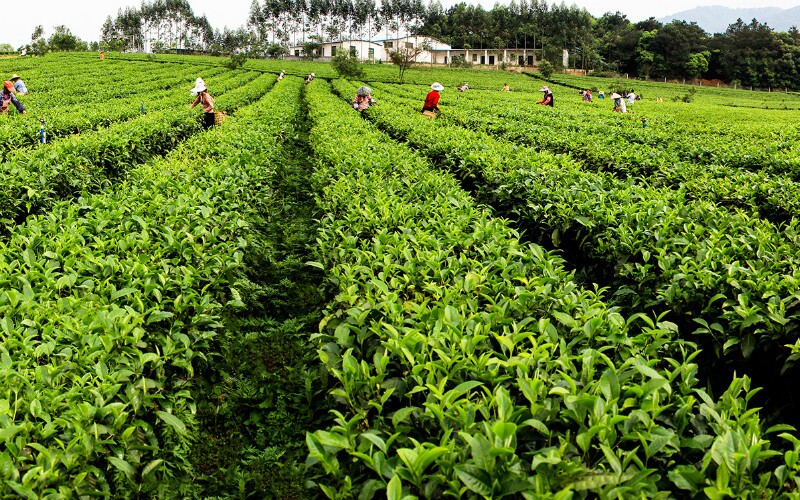 Meng Ding Mountain, located in Mingshan County, at the south-west edge of Sichuan Basin, is 100 kilometers from Chengdu and 15 kilometers from Ya'an. The scenic region mainly consists of Mengshan Mountain (蒙山) and Baizhang Lake (百丈湖).

Mengshan Mountain is famous for the Five Peaks:  Shangqing (上清), Lingjiao (菱角), Piluo (毗罗), Jingquan (井泉) and Ganlu (甘露). The peaks circle like a lotus, among which Shangqing is the highest peak, with 1,456 meters of elevation. The annual rainfall at the top of Mengshan Mountain is 2,000 millimeters, which contributes to its Chinese name "Meng" (raining and foggy). It is "The Holy Mountain of the World's Tea Culture" for it is one of the places where tea originated.

Meng Ding Mountain is the birthplace of the world's tea culture, as well as being home to the earliest tea plantations ever recorded in written Chinese, according to the earliest legend of tea planting by Wu Lizhen (200 BC-53 AD), from Mingshan County, Ya'an, Sichuan. Living at the top of Meng Ding Mountain, the Taoist was the first person to plant tea in the world, and was known as "the ancestor of tea planting".

The altitude, soil and climate of Meng Ding Mountain are very suitable for growing tea, so as far back as over 2,000 years ago, in the Western Han Dynasty, "the ancestor of tea planting", Wu Lizhen, began to plant domesticated wild tea, symbolizing the beginning of a human-plant tea history.

The Tang and Song dynasties were the heyday of Mengshan tea. It was selected as an ancient imperial tribute from Tianbao in the first year of Emperor Tang Xuanzong's reign (724 AD) until the Qing Dynasty, lasting for more than 1,200 years. It had been used to worship heaven and ancestors by "Qingminghui" of the imperial household (皇室 "清明会"). The special royal tea was picked from the seven holy tea trees planted by Wu Lizhen. In the Qing Dynasty, the Five Peaks were zoned as a forbidden area and the seven holy tea trees were fenced by stone balusters as the "Imperial Tea Garden" which has remained until now.

Mengshan tea has long been regarded as a magic bullet for curing diseases among people, so it got the name of "Holy Tea" and Meng Ding Mountain has been hailed as "the Hometown of Holy Tea".

In the long course of development, with its own unique charm and flavor, Mengshan tea not only won the favor of the public, but was also loved by ancient literati. Many beautiful poems about Mengshan tea were written by great poets from the Tang, Song, Ming and Qing dynasties to now. The long history has formed the unique Mengshan tea culture.

Picking and Processing of Mengshan Tea

Mengshan tea picking was very solemn and mysterious in ancient times. When the tea sprouted in spring, the officials of the local government chose an auspicious day (usually before the Tomb- Sweeping Day) to hold a tea ceremony. They wore royal robes, beat drums and clang gongs, and set off firecrackers to worship the "Holy Tea" with their subordinates and all the local monks. Then they would "pick tea leaves under the supervision of local officials". The tribute tea only came from the seven holy tea trees - generally 360 tea leaves were selected each year, which was an extremely limited quantity, and the selected tea leaves were then processed by a professional tea maker chosen from the monks, accompanied by chanting from other monks. After that, two silver bottles would be filled with the tea product, which were then put into a wooden box which was sealed with yellow silk and red print. Before the tea was sent to the Forbidden City, the local official chose another auspicious day and did the salute again. In every county and province the tea went through, local officials would escort the tea very carefully until it arrived in the capital city; this was the so called "imperial tribute tea" which was only served to the Emperor. After the best tea was picked and sent to the Emperor, it was time for the tribute tea to be picked for other members of the royal household. These teas were also made delicately, including many high-level teas, such as "Leiming" (雷鸣), "Wuzhong" (雾钟), "Queshe" (雀舌), "Baihao" (白毫) and "Niaozui" (鸟嘴).

In fact, Mengshan tea, also called Mengding tea, is the collective name of all kinds of famous teas in Meng Ding Mountain, including both traditional and newly made famous teas, the best among which are "Mengding Ganlu" (蒙顶甘露) and "Mengding Huangya" (蒙顶黄芽). "Mengding Ganlu" is made from the 5 % tender tea leaves which are grown in the spring equinox season.

Tea growers: from February or March to October.

Meng Ding Mountain has four distinct seasons, boasting its unique man-made landscape and natural landscape formed by nature and history. Along with Mount Emei and Mount Qingcheng, it is one of the three famous mountains in Sichuan; it is beautiful, attractive and time-honored.

At the foot of the mountain is the scenic countryside of Western Sichuan. The middle part is 80 to 1,000 meters above the sea level; you can see large areas of lush tea gardens from west to east, which are very spectacular. The upper part is a mixture of an evergreen broad-leaf forest and an evergreen needle forest, which is very magnificent, especially in spring and summer. The main peak of Meng Ding has a wide area of ancient ginkgo trees which are tall and upright. They are over 1,000 years old and are so outstanding that they can be seen in the distance.

The heavy rains on the mountain top form a cloudy and foggy scene. In spring, summer and autumn, looking down from the top, the peaks and valleys are among the looming fog, just like an ink-wash painting of floating heaven. In winter, looking from the mountain foot to the top, the snow and ice are hanging on it, gleaming among the fog. At sunrise, the mountain is golden in the sunlight. At sunset, the myriad of twinkling lights of Mingshan and Ya'an cities look like shining stars.

Tiangai Temple was first built in the Han Dynasty and then rebuilt in the Song Dynasty at the top of Meng Ding Mountain. It covers an area of 8,000 square meters, surrounded by 12 thousand-year-old ancient ginkgo trees and numerous hills. In the middle of it is a grand hall built from stone pillars in the Ming Dynasty; it is the place where Wu Lizhen planted the earliest tea plant. The statue of Wu Lizhen is standing in the hall, with pictures and illustrations of Mengshan tea's history beside it. It is the best destination for savoring tea.

It is located in the center of the Five Peaks, like sitting in the heart of a lotus, so Wu Lizhen planted the seven holy tea trees there. Tribute tea has been selected from there since the Tang Dynasty. It was officially named "the Imperial Tea Garden" by Chunxi in 1186 (the 13th year of Emperor Song Xiaozong's reign, 宋孝宗淳熙十三年).

It is built on the peak of Ganlu, on the left side of the Imperial Tea Garden. It is built in a unique stone structure style.

The well is next to the Imperial Tea Garden, also named "Ganlu Well". It has a stone tablet inscribed with the words "Gumengquan" set beside it, surrounded by some stone balusters with a carved "two dragons playing with one pearl" pattern. Wu Lizhen used to draw water from the well to plant tea trees.

The temple is located on the western hillside of Mengding Peak, 1,000 meters in altitude, covering an area of 5,000 square meters. Rare plants like seven-heart camellias and michelia alba are planted there, among which a red azalea has been planted since the Ming Dynasty, which still blooms in early summer.

It is located on the eastern ridge of Meng Ding Mountain. It is a hexagonal pavilion built as a wooden structure, with a 36.7-meter-long carved dragon on it, which was built in the Ming Dynasty. 218 different symbols of the Chinese word "dragon" (龙) are also carved inside the pavilion.

It lasts from Yuwang Palace (禹王宫) on the hillside to Tiangai Temple. It is built in an ascending gradient of 30°-50°, stretching skyward like a celestial ladder into heaven.

It is at the trailhead of the Celestial Ladder. The literature, poems, specimens and tea wares of Mengding tea are all displayed in the museum. A stone tablet which recorded the relative content of Mengding tea is the historical evidence of its development. The tea culture could nurture your soul; it is a graceful experience to wander in the museum.

The highway condition is good and the transportation is convenient. Meng Ding Mountain is located in Mingshan County, Ya'an; you can take a bus at Chengdu New South Gate Bus Station (成都新南门车站) to Mingshan County (120 kilometers). The route connects Mingshan County and Meng Ding's cement road, where buses and motor tricycle are available.

Some scenic hotels are built at the top of Meng Ding Mountain, but the price is relatively high. Some rural home inns are also available near the scenic spot, which are cost-effective. Because of the short distance between the mountain and Ya'an's downtown area, in Mingshan County, staying in the downtown area is also a good choice. Staying near the scenic spot is still recommended for the fresh air, amazing scenery and the edification from the holy land of the thousand-year-old tea culture.