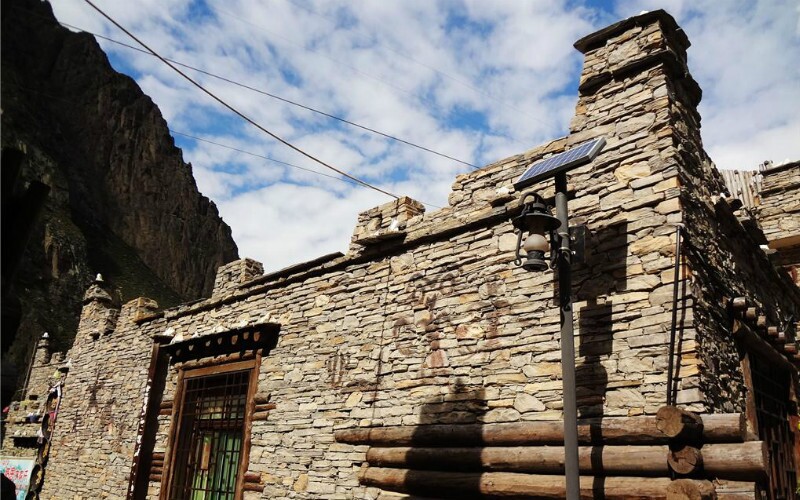 Taoping Qiang Village is situated in Taoping District, Li County (理县), and it is about 163 kilometers away from Chengdu. Taoping Qiang Village has the most well-preserved architectures of the Qiang People, and retains their pure and primitive cultures. Moreover, the village is the best example of Qiang-style architecture groups and it is called the "mysterious oriental castle" by experts.

Founded in 111 BC, Taoping Qiang Village has a history of more than 2,000 years. In the Western Han Dynasty, it was called Guangrong County (广柔县), serving as an important pass and defense position. Through battles and wars, the village has still survived perfectly. Now, there are 98 households in the village.

Taoping Qiang Village seems to be the epitome of the thousand-year history of the Qiang people. The traditional habits have remained unaltered for ages, which are shown by the rural and idyllic life: from the children picking up the apples in the fields to the old men sitting at their gates dressed in the ethnic costumes, from the women embroidering to the men drinking barley wine.

The most important festivals of the Qiang people are: Worshipping the Mountain Meeting (祭山会) (also called Climbing Around the Mountain Meeting 转山会) and Qiang Year Meeting (羌年会) （also called the New Year of Qiang 羌历年). The two festivals are held in spring and autumn respectively. In spring, the Qiang people pray for a good harvest and are thankful for the harvest their god gives them in autumn.

The two festivals are essentially connected to farming activities but are always full of a strong religious culture, which demonstrates the brilliance of the ancient culture.

The Taoping Watchtowers of different heights and shapes stand in the village. They range from a few meters high to tens of meters high, and they are in the shapes of tetragons, hexagons or octagons. The architectural complex is the integration of stone towers and dwellings. They were constructed with earth, stones, hemp and wood, some of which were constructed only with earth and wood. The solidly built towers and houses are still in good condition after many earthquakes.

There are alleyways between the walls of the dwellings in the village. With some houses built over those alleyways, more alleyways have appeared, making the whole alleyway structure more complicated. Walking in the labyrinth of the alleyways, people feel themselves transcending time and space.

It’s amazing that the Taoping Watchtowers were built without any drawings, measurements and calculations, yet they are well-structured, solid and unique. The watchtowers are a wonder from the history of world architecture which attract a succession of tourists from home and abroad to admire them.

Unlike the traditional architectural shapes, there are four gates set in the east, the west, the south and the north respectively in the village. The eight entrances and exits radiate from the highest watchtowers in the village. Those entrances and exits and 13 alleyways intersect to form a well-served road system. Local people may come and go easily, but it is difficult for strangers to come in and out without the guidance of villagers.

Under the earth, there are many water channels covered by earth and flagstones. There are some movable flagstones which have been placed at certain distances, which help people to get water easily. The convenient and secret water channels serve as a water-net that reaches every watchtower, providing a large living space for the villagers, especially during wartime.

The oldest building in the village has a history of 2,000 years, constructed with yellow mud and stones. It is a blend of the arts of math, geometry and mechanics and shows the splendid culture of the Qiang People, an ethnic group with a long history.

The watchtower is the symbolic piece of architecture in the village. So far, there are only two watchtowers: one is the house of Chen Shiming (陈仕明), and the other one is situated on the bank of the river opposite the village, which is about 30 meters high and has nine stories. There are windows for shooting in all directions at each story and the bell hole on the top serves as a channel to transmit messages.
For the Qiang people, the building materials used are the earth and stones from the mountains and hills near the village. In general, they dig a square-shaped ditch of one or two meters in depth in the piece of ground they have chosen; next, they build the footing with big stones. Then, they use the yellow mud to cement the flagstones.

Qiang-style songs and dances are the main features of Taoping Qiang Village. The Qiang people have been best known for being good at singing and dancing for over 2,000 years. They sing at any time, anywhere, even when they work in the fields. You will regret it if you don’t watch the performances of singing and dancing.

Qiang-style songs and dances are connected to subjects such as work, love, worshiping or driving away evil. For songs, there are many singing styles such as solo, antiphonal, and antiphonal singing in groups.

Salang dance is similar to the Guozhuang, a Tibetan dance, but is faster and more beautiful. It is the most active and passionate art form of the Qiang people. Men and women, old and young, all participate in it. Dozens of people, even hundreds of people, sing and dance, creating a heated atmosphere and inviting people to join in.

The drum dance was originally performed by the wizard of Qiang when he carried out worshipping activities. Later, the drum dance gradually developed to be a unique dance with a rough style. When some big occasions occur, such as the spring festival or a wedding, all the villagers will gather to drink Za wine (a type of alcohol that the local people produce), sing folk songs and dance around bonfires through the night.

During their stay in Taoping Qiang Village, people can enjoy the singing and dancing performances. Also, they can take part in the bonfire parties. Sitting around the bonfires, having roast mutton, drinking barley wine, and dancing with the Qiang girls and boys, people can appreciate the soul of the ancient culture of the Qiang people.

Take the coach at West Gate Station in Chengdu (成都西门车站) to Maerkang (马尔康) or the coach to Li County and get off at Taoping (桃坪).

Take a coach at West Gate Station in Chengdu to Li County, and then take a local bus to Taoping Qiang Village.

The features of a plateau climate there are obvious. The average temperature in winter is -3°C, and it is 15°C in the two months of July and August. The spring and autumn seasons are longer and it is very cool in summer. With a large fluctuation of the temperature between the daytime and night-time, tourists are recommended to take more clothes.