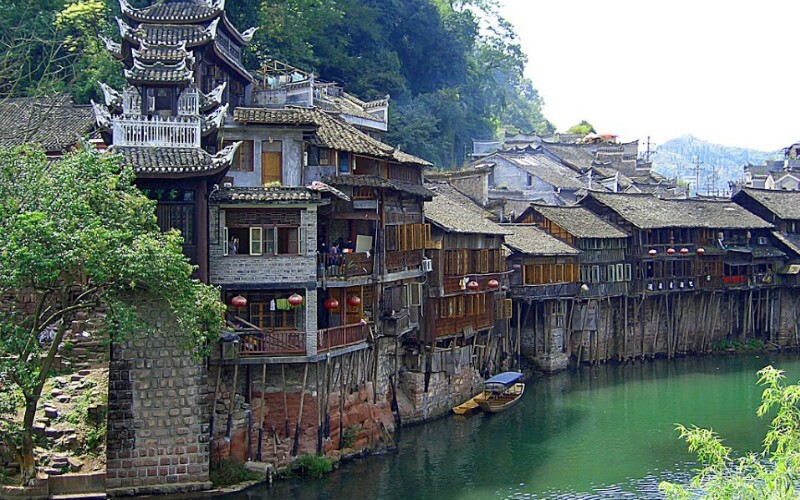 The Southern Great Wall is short for the Great Wall in southern China and is famous for being the only Great Wall in southern China. It is situated in Xiangxi Autonomous Prefecture in Hunan Province. Therefore, it is called Miaojiang Great Wall (Great Wall of Miao Territory). With a total length of 190 kilometers, the Miaojiang Great Wall is situated in Fenghuang County and starts north of Xique military camp (also known as Danwu military camp) of Guzhang County in western Hunan Province and south of Tingzi Pass of Tongren City in Guizhou Province, and is mostly constructed on precipitous ridges.

In order to consolidate their power, rulers in the Ming Dynasty and the Qing Dynasty suppressed the minorities in southern China, especially the Miao ethnic group. The Southern Great Wall was a result of their suppression. For the sake of continuous ruling and suppression, the rulers came up with the evil plan of building walls and stationing troops to separate the place. They separated the Miao territory in western Hunan Province into northern and southern parts and prescribed that "the Miao ethnic group must not come out from their territory, while the Han ethnic group must not step into Miao territory". Thus, economic trade and cultural exchanges between the Han and Miao people was cut off. It was a pass consisting of blockhouses, watchtowers, sentry posts, emplacements, gates, and houses outside or near the gates, which was used to isolate and conquer the Miao ethnic group.

With the government's appropriation of 40,000 taels of silver, the Southern Great Wall was primarily built during the Wanli period of the Ming Dynasty. During the late Ming Dynasty, the sidewalls were razed by the Miao ethnic group. Then the Qing Dynasty rebuilt new walls on the site of the old sidewalls.

There are over 1,300 blockhouses, watchtowers, sentry posts, emplacements and gates for stationing troops and defenses, including more than 800 of those in Fenghuang County. At that time, 4,000-5,000 soldiers used to be stationed along the section. It even increased to 7,000 at the height of the population. The walls have a height of 3 meters, a width of 1 meter at the top and 2 meters at the base. Therefore, local places were mostly named after paotai (an emplacement), shao (a sentry post), qia (a pass), bao (a fortress), diao (a blockhouse), guan (a pass) and lying(a military campus).

The Southern Great Wall not only had similar defensive functions as the Ming Dynasty's Great Wall in northern China, but it also had a similar military organization and soldier system, which meant that it was a complete part of the Chinese Great Wall.

Huangsiqiao Ancient Town is located 28 kilometers west of Fenghuang County and lies in the strongholds of Hunan Province and Guizhou Province; it was built in 686 AD in the Ming Dynasty. Between the Ming Dynasty and the Qing Dynasty, it was the most significant military camp of the Southern Great Wall and was built into a stone town in 1700 AD. The wall of the town has a height of about 5 meters, a width of 3 meters and a circumference of 500 meters, with three gates in the town. There is a tower on every gate. All of these add tothe magnificence and uniqueness of Huangsiqiao Ancient Town.