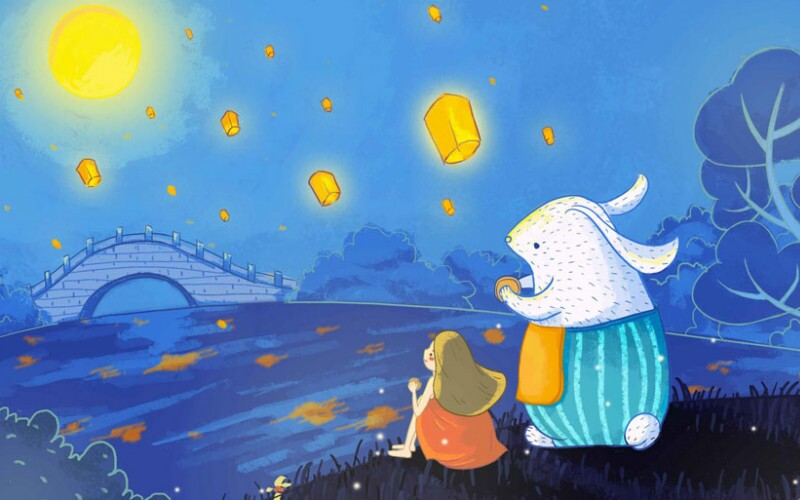 The Mid-Autumn Festival is the second most important traditional festival to Chinese people after Chinese New Year. Here are 10 stunning facts about this popular holiday.

1. The Mid-Autumn Festival is often in late summer!

The Mid-Autumn Festival falls as early as September 8, which is late summer for south China; not even autumn! Its latest date of October 6 is still only early autumn for south China. Only in north China, where there are short summers and long winters, is the festival aptly named climatically, but only for about half of the time. So why is it called "Mid-Autumn"?

The Mid-Autumn Festival is always celebrated on the 15th day of the 8th month of the Chinese lunar calendar, the middle of lunar month 8. The 7th, 8th, and 9th lunar months are classed as autumn. So actually it is the "mid-lunar-autumn" festival.

Read about the relationship between the moon and the Chinese lunar calendar.

2. It's also called the "Moon Festival".

In Chinese beliefs, the roundness of the full moon means 'togetherness', thus the reunion moon is very special in Chinese culture. The Mid-Autumn Festival falls on the 15th day of the 8th lunar month every year, which is a "full moon day".

On the night of the Mid-Autumn Festival, the harvest moon is supposed to be at its brightest and fullest of the year. This festival also has an origin in moon worship.

3. Chinese people believe the moon is brightest at Mid-Autumn, but it's not usually!

It is generally believed that the moon is brightest in fall, which holds some truth, due to least cloudy skies on average. But it's no more likely to be a supermoon than any other time of the year.

Actually, the Mid-Autumn Festival does not always occur on the night of the full moon, which is contrary to popular belief. The Chinese lunar calendar does not coincide perfectly with the cycles of the moon. However, the 15th day of the 8th lunar month is always within two days of the harvest moon night.

The Mid-Autumn Festival is now joint third for public holiday allocation alongside Labor Day and three others. See more information about the China public holiday schedule.

The cost of a mooncake is actually quite low, e.g. 4 yuan (approx. 1 USD) for one mooncake. But the beautiful, luxury packs are a higher price. Every year, star-rated hotels promote luxury tailor-made mooncakes, which are sometimes priced higher than 1,000 yuan (150 USD) for each box (usually 6 mooncakes, approx. 1 kg).

The luxury mooncakes are usually stuffed with luxury ingredients, such as shark fin, abalone, and bird's nest. Or they are packaged in a luxury box that is decorated with gold or silver. People like to buy them as presents for friends or families.

6. Chinese people make some huge mooncakes — some bigger than a jacuzzi!

Every year, Chinese people will try to make a mooncake as big as possible to break the record.

8. Mid-Autumn was once the second "Valentine's Day" in China.

In ancient times, the Mid-Autumn Festival was another Chinese "Valentine's Day", alongside the Double Seventh Festival (this usually falls in August). Single people used to pay homage to "the old man in the moon" — the god who unites people in marriage — and prayed for his help finding true love and getting married quickly. Couples enjoyed spending some romantic time together.

9. Chinese people like to climb hills or walk by a lake to appreciate the mid-fall moon.

See the Best places to celebrate the Mid-Autumn Festival.

10. The Chinese youth love to give lucky money as Mid-Autumn gifts using WeChat.

In traditional customs, people usually give mooncakes as gifts. But the Chinese youth tend to give lucky money — "digital red envelopes" — to friends or families via their phones. It's a fashionable activity to celebrate a festival.

Top 12 Mid-Autumn Festival Foods: Dishes and Fruits You Must Eat