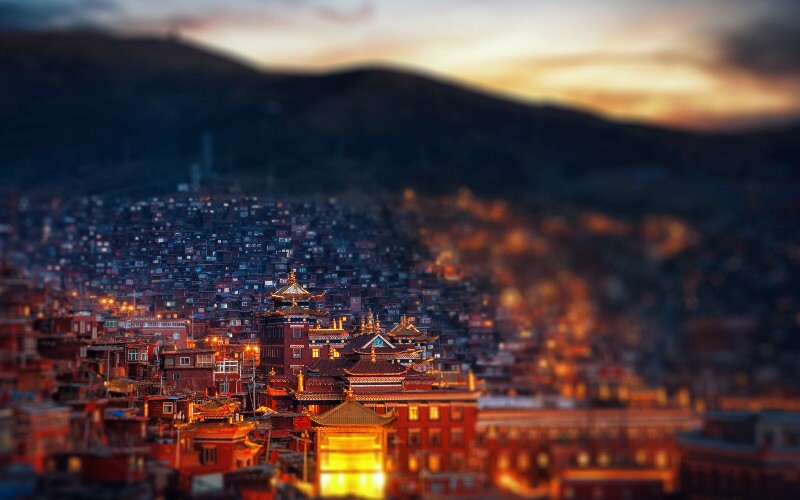 Seda: the Largest Tibetan Buddhist Monastery in the World

Seda (or Sertar in Tibetan), which forms part of the Garze part of Sichuan province, is home to the largest Tibetan Buddhist institute in the world.

Founded in 1980, the Larung Gar Buddhist Institute now houses some 40,000 monks, nuns, students and pilgrims. The place is of huge spiritual importance to Buddhists, with residents hailing not just from the nearby area but also from provinces all over China and even from overseas.

Even for secular tourists, the first sight of Larung Gar is an unforgettable one: tens of thousands of tiny red houses sprawl on the hills around the central prayer halls, like a spiritual shanty town glimmering in the bright, fierce sunshine of the Tibetan plateau. The thin air adds to the otherworldly feel of the place. Situated some 4,000 metres above sea level, every step here is an effort, and the walk from the main gate through the complex up to the hotels at the top of one of the hills feels like a pilgrimage in and of itself.

Monks and nuns are strictly segregated, with a wall dividing the two sections: each part has its own housing, prayer and teaching halls, and even restaurants and shops. Aside from a common area in front of the main monastery that is open to both sexes, monks and nuns are not allowed out of their designated areas. Although given the similar red robes and shaved heads borne by both monks and nuns, it can sometimes be difficult to tell which area you are in.

It’s easy to spend a couple of days just drinking in the sights, sounds and smells of the working Buddhist institute. Start by exploring around the monastery on foot, taking care not to get lost in the maze of seemingly identical red wooden and corrugated metal houses.

Bells summoning devotees to prayer go off at dawn and throughout the day. Visitors are welcome to listen to lectures and take part in meditations (both are given in Mandarin Chinese). Just make sure you take your shoes off before stepping inside any of the monasteries or prayer halls. (More on visiting temples in China)

There are some gentle climbs into the hills around the monastery, although at that altitude even a short walk can feel like a huge effort, so be sure to bring plenty of water, sun screen and adequate clothing.

Sky burial is an important funeral rite for Tibetan Buddhists. The body of the deceased is offered to vultures as food, thereby embodying the Buddhist concepts of generosity and compassion. To begin with, a specially trained official prepares the body by skinning it, although this varies between rituals. Finally, when the body is ready, the waiting vultures are summoned to feed while monks recite mantras.

The ceremony is not for everyone, not least because it has turned into something of a tourist attraction, with domestic holiday-goers bussed in from the nearby town of Sertar especially. Officials have arguably tried to reduce the impact of this by erecting a screen in 2015 to ensure the corpse itself is not visible to tourists (in previous years this was not the case), and they are more vigilant about asking spectators not to take photos (again with questionable impact).

If you do decide to go, ceremonies start at 1pm most days. To get there from Larung Gar, it’s an hour’s walk away across the hills – monks and nuns are more than happy to point you in the right direction. From about midday, vultures will start congregating on the hillside nearby.

Larung Gar itself has very few options for accommodation.

The main hotel is situated on top of the hill overlooking the monastery and commands magnificent views of the valley; unfortunately it is very overpriced with rudimentary facilities and only a limited number of rooms so is frequently fully booked (it doesn’t allow you to reserve rooms either, so you have no choice but to ask the unfriendly receptionists when you get there).

There are a couple of very basic guesthouses around the monastery and a few more down the hill towards the main gate, and some tourists also stay with monks or nuns whom they befriend, although foreigners are not technically allowed to do this.

A more reliable option especially in the summer peak season is to stay in one of the many hotels in Sertar town 25km away and find transport to take you to Larung Gar each day.

There are a number of small vegetarian restaurants in the institute, with the majority clustered around the central monastery. They all serve roughly the same fare of simple Chinese style dishes, mostly consisting of potato or cabbage.

We Can Help You Visit Larung Gar

We can customize one of our Sichuan tours to include a visit to Larung Gar, or you can contact us directly and we will tailor a tour to your requirements.