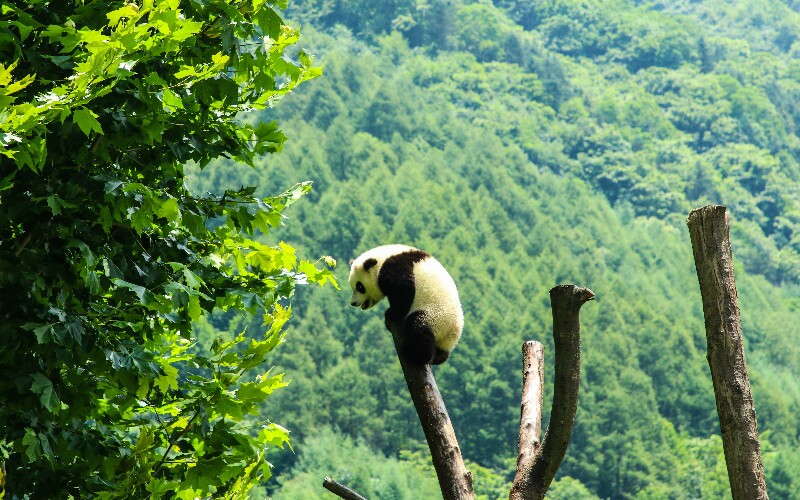 Giant Pandas Behavior — What Do They Do All Day

Giant pandas spend their lives eating bamboo and walking around the forest floor. They are good climbers and can also swim. They don't build dens (except to put cubs in) or hibernate. They prefer shallow slopes and solitary living. If it is too cold up in the mountains they head down to the valleys where it is warmer.

Because of their low-energy diet they avoid stressful situations and exertion, preferring shallow slopes and solitary living. They use scent markers to avoid one another. Giant pandas don't roar like other bears, but bleat like goats, or or honk, growl and bark to communicate. Cubs whine and croak for attention.

The giant pandas spend as long as 14 hours eating per day. A giant panda needs about 12 to 38 kilograms of food per day, approximately 40% of its own weight. The giant pandas prefer eating tender stems, shoots and leaves of bamboo, all of which are richer in nutrition and lower in fibrins.

In addition to eating for about half a day, the giant pandas spend the rest of their time in sleeping.

In the wild, the giant pandas sleep for 2 to 4 hours between its two meals, whose favorite sleeping poses include lying flat on their backs, lying on their sides, lying on their stomachs, stretching their paws and rolling themselves up into balls.

The keepers feed giant pandas twice a day at regular times in the zoo, therefore, the giant pandas spend most of their spare time in rest, and they seem very lovely even during their sleeping time.

pandas get into positions of various kinds with their seemingly clumsy bodies. Their favorite sleeping position is putting their hind paws on the trees with their front paws shading their eyes.

Fond of Climbing Trees — to Protect Themselves

The pandas are very nimble in climbing trees and run rapidly in danger. They propose to their partners, run away from danger and evade stronger competitors by climbing trees.

The giant pandas also walk into the valley, sneak into mountain villages or residences, which play with round-shaped utensils as toys and later abandon them in the wild.

Once in a while, the giant pandas also show their kindness to sheep and pigs by sharing food and rooms with them.

Panda families don't live together. They are solitary, each female having a well-defined range. Males generally live apart, except for in the short breeding season (March to May), when they compete for female attention. Females raise the cubs alone.

With an uncommunicative and eccentric temperament, the giant pandas prefer freedom of being alone, and sleep in the daytime and look for food in the night. In addition to one month spent with their partners during mating season, most of their time is spent alone.

The giant pandas have a very docile temperament in most cases, and they often lower their heads or shade their faces with front paws to conceal their true appearances when they come across a man for the first time. Seldom actively attacking men or other animals, the giant pandas always evade them when coming across them.

However, the giant pandas consider their cubs holy and untouchable once they give birth, and they will burst into rage at such small things as their cubs being watched by visitors. The giant pandas can stretch their paws and open their mouths wide like cats to make themselves more comfortable. They can also shake water off themselves like dogs after a heavy rain.

Most communication among giant pandas is reached by scent markings left on the habitat, by which they can find their previous partners during mating season.

After finding their partners, they will communicate with sound, which is barely understood by humans, and they will remain silent when simply but playing. Therefore, we could predicate their behaviors simply by their sounds.

The secret to keeping peace in the habitat is dividing territory by scent markings. The giant pandas leaves their glandular secretions on tree stumps, walls and ground in their habitats, by which they gather together or evade stronger competitors.

In addition to glandular secretions, urine is also employed by pandas for scent markings. While making markings, the giant pandas usually shake their heads with mouths half open, and then strip the barks from trees where they urine to attract attention of other pandas.

Mating from March to May

Giving Birth from July to September

Giant panda gestation is about 83 to 200 days, and usually give birth from July to September. Cubs usually were born in hidden hollow trees or natural dens, where the branches and dry hays well-prepared by mother pandas are available. Normally, the giant pandas are monotocous and rarely multiparous. Even the female giant pandas have two cubs at one birth in the wild, they would choose to take care of one and abandon the other.

Owing to feeding on bamboos, the giant pandas need to spend long time in eating to get enough energy each day, and they will leave their cubs to hunt for food for 2 to 4 hours each day even in their child-care periods.

If you are interested in a panda tour, we can help you tailor-make your own unique tour. If you have no idea, please see our popular tours below for inspirations: