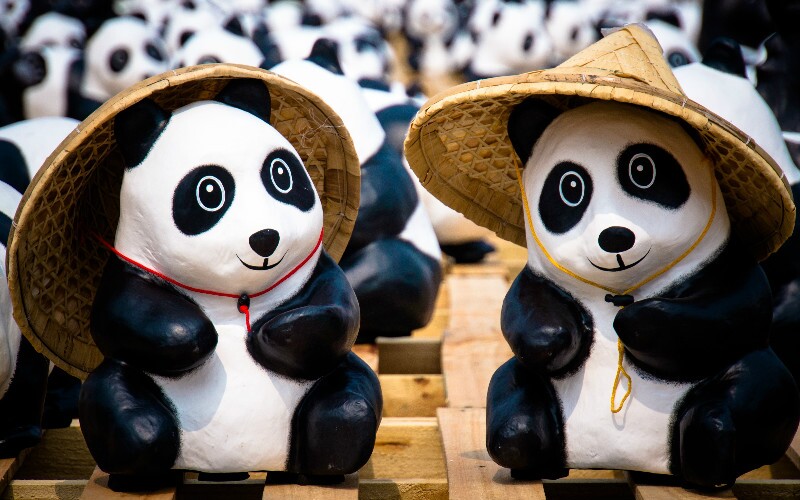 The giant panda is China's  "national treasure", unknown in the West until about 150 years ago. Who brought pandas to Western countries? How did they get the name "giant pandas"? Read on to learn more.

The "black-and-white bear", as Father David named it, was new to the West 150 years ago.

Jean Pierre Armand David was a French priest. When he was 36 years old, he came to China.

One day in 1869, on his way back to his church, he was invited to have a rest in a farmer's house. He saw a black-and-white animal skin, which looked like a bear's. He recognized it as a new species that he had never seen. Nor had anyone else in the West.

Father David hired a hunter to get another giant panda's skin. The hunter brought back two panda bodies, one young and the other an adult giant panda. He delivered the giant pandas' skins to Paris, and made quite a stir.

After their first appearance in Paris, adventurers and businessmen came from the West to western China to hunt giant pandas.

In 1929, Kermit and Theodore Roosevelt Jr. came to China and became the first Westerners to shoot a giant panda. Later this giant panda was made into an exhibit and displayed in the Field Museum of Natural History, Chicago.

In 1934, Ruth Harkness's husband came to China to search for giant pandas. But he became seriously ill and died in China in 1936. Ruth then made it her mission to fulfill his dream to get a live giant panda to the US. She finally got one and named him Su Lin. She brought Su Lin to the USA in 1936.

The first giant pandas in the UK arrived in London Zoo in 1938. After this, war and regime change meant there were no more pandas taken to the West for two decades. Chi Chi, famous as the logo image of the WWF, was purchased by London Zoo in 1958, and became a star attraction.

How Did the English Name "Giant Panda" Come About?

As giant pandas mainly live in sub-Tibetan mountainous areas, their English name took a long while in coming.

In Chinese, giant pandas are called dàxióngmāo (大熊猫 /daa-sshyong-maoww/ 'big bear cat(s)'). In ancient Chinese, they had different names pi (貔, a mythical beast), he (貉 'raccoon dog'), mo (貘 'tapir'), etc. But no one gave it a scientific name.

Father David found that giant pandas looked like bears, so he classified them (correctly) as bears (Ursidae). With a different appearance and diet from the black bear, Father David named it Ursus melanoleucus ('black-and-white bear')

It's probable that the word "panda" is from the Nepalese word for red panda: nigalya ponya ('bamboo eater', ponya means 'bamboo'). Actually, the red panda (or little panda, lesser panda) was named before the giant panda.

Although giant pandas share habitat preference and diet with the red panda, as well as an enlarged bone called a "sixth finger" to help grip bamboo shoots, they actually belong to different animal families. But that is how the giant panda got its name: because they act and look (somewhat) like red pandas, but are much bigger.

A giant panda in its native habitat

If you want to see China's lovely giant pandas, we can tailor-make a tour for you to see pandas according to your particular requirements.

See our most popular panda itineraries below for inspiration: