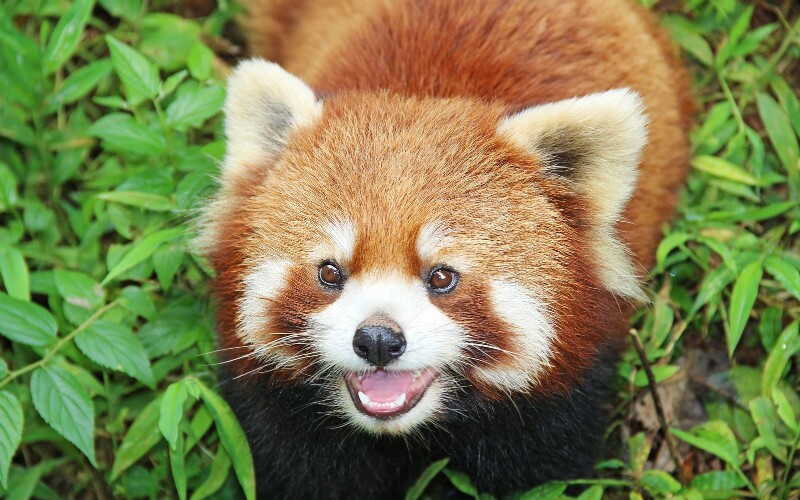 Red pandas (or lesser pandas) are an anomaly among animals: they have long, fluffy striped tails like a raccoon, and faces and diets that resemble a giant panda's, but they clean themselves like a cat. However, they are not raccoons, bears, or cats — they are the only living species in a genus of their own (Ailuridae, misnamed using the ancient Greek for 'cat').

Red pandas look like a big domestic cat in shape. The main color of their fur is reddish-brown with white patches on the face. They have a long, thick reddish-brown tails with six yellow rings.

Red pandas are nocturnal animals, spending their days sleeping in trees and foraging for food at night. After waking up, they clean their reddish-brown fur just like a cat, licking their paws and rubbing parts of their body. After his morning bath, a male marks his territory.

Red pandas are found in the southern Himalayan foothills, from India to China and as far south as Myanmar. In China, they live mainly in the southwestern provinces of Yunnan and Sichuan, as well as Tibet. The red panda has been found as far east as Shaanxi Province. Though not native to North America, fossil remains have even been found in Tennessee.

Though not related to the giant panda, red pandas also eat a lot of bamboo (about 2/3 of their diet), because their digestive systems cannot absorb the cellulose. Red pandas also eat small mammals, grubs, fruits, eggs, tender grasses, flowers, and insects.

The Red Panda Population Is on the Decline

Red pandas are not as abundant as they used to be. The International Union for Conservation of Nature and Natural Resources (IUCN) has red-listed them as being vulnerable to extinction as the number of red pandas in the wild is decreasing. The IUCN estimates there are only about 10,000 red pandas left in the wild, but because red pandas are only active at night, it is difficult to get a firm count.

A major reason for the decreasing red panda population is loss of habitat due to people moving into their living areas. The ever-growing human population means a decrease in living space for the red pandas. Poaching and hunting also threaten red pandas in China and Myanmar.

When you see pictures of the red panda, you will find it looks like a raccoon or a raccoon dog. The simplest way to distinguish them is their black legs.

Raccoon dogs are light brown and have black rims to their eyes, but no ringed tail or black legs. They are of the dog family, most closely related to foxes.

Raccoons have black eye rims and ringed tails, and can even have reddish fur, but not as reddish-brown as red pandas'. They don't have black legs. They are of the same superfamily as the red panda, but a different family.

Red pandas have black legs and eye patches like giant pandas, but otherwise look quite different. Red pandas share a superfamily with the skunks, weasels, and raccoons; separate from the giant pandas, in the bear family.

Most zoos in China have red pandas, making it easy for you to see them. When you visit giant pandas you can also see the lovely red pandas. Read more on The Best Places to See Giant Pandas in China.

If you are interested in the cute “pandas”, red or giant, the best places are around Chengdu — “pandas' hometown”. See our Chengdu tours, or we can help you tailor-make a tour to see them.