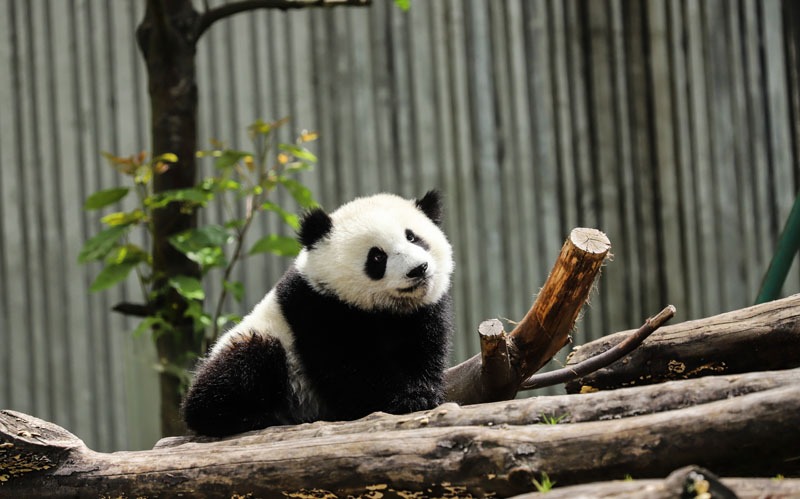 15 Fun Pandas Facts You Didn't Know (#7 Will Impress You)

When we think of giant pandas, we think of lovely black and white bears. They are cute and have many fans all over the world. But do you really know pandas? The following are 15 interesting giant panda facts to help you know more about them.

1. A panda year is equivalent to three human years.

A panda year is equivalent to about three human years in terms of life expectancy. Giant pandas live 18–20 years in the wild and 25 to 30 years in captivity. The world's oldest giant panda was Xinxing (‘New Star') in Chongqing Zoo at 38 years old and four months (1982–2020). That's the equivalent of 115 human years.

A panda's 6th "finger" is like a human thumb. It has the same function as a thumb, but it is actually an unusual wrist bone or opposable paw heel with strong muscles but no movable joints, which allows it to grasp food.

They can press the bamboo into fat cigar shapes with their 6th digits for efficient eating.

3. Pandas will abandon a child if she has twins.

Wild pandas usually have just one cub, while pandas in captivity are more likely to have twins. In the wild, If the mother panda has two cubs, she will only feed the one she thinks is stronger. The other one is left to fend for itself.

The reason for this is that a newborn cub is very weak. Cubs start eating bamboo at around 12 months of age, but until then they are completely dependent on their mother. So, in the wild, female pandas don't have sufficient milk or energy to care for two cubs.

Giant pandas are good tree climbers. They can climb trees from 7 months old.

In the wild, giant pandas (particularly cubs) climb trees to avoid their enemies and survey their surroundings. As it is safer in a tree, many giant pandas like to sleep in trees.

Sometimes, they just climb to look at the scenery.

Giant pandas are bears, and like other bears, they can swim.

When not eating and looking for food, pandas sleep most of the rest of the time. In the wild, giant pandas sleep for two to four hours between feeds.

Giant pandas are solitary animals. In the wild, they have their own territory, and they do not allow it to be invaded by other pandas.

That's because giant pandas feed on bamboo and do not need to hunt cooperatively. They need to eat a lot of bamboo to meet their nutritional needs.  If giant pandas lived in groups, there would be conflict over getting enough bamboo, which would negatively affect the survival of all.

A panda usually needs its own 3–8 square kilometers (1–3 square miles) of bamboo forest to survive.

99% of a panda's diet consists of bamboo, but its digestive tract retains carnivorous characteristics. Giant pandas' ability to digest bamboo is low at less than 20 percent, and bamboo itself is low in nutrients. So, in order to keep up their energy, pandas have to eat a lot of bamboo and thus poop a lot!

Giant pandas poop every 15–20 minutes. The vast majority of their feces is undigested bamboo.

In the past, locals made the undigested bamboo pieces in the poop into picture frames and bookmarks — remarkably they did not smell!

When giant predators like sabre-tooth tigers were no longer around, pandas didn't need to be as fast and turned into baboo-eating specialists to avoid becoming extinct themselves.

We may know them as eating only bamboo, but they do like some fruit too, and can eat meat.

9. Pandas have black and white coats.

Pandas' black and white coats are good camouflage. Pandas need to spend most of their time looking for bamboo to eat in their habitats, which are mainly forests and snowy mountains. Their black and white coloring helps them avoid unwanted attention.

The white of their coats helps pandas hide in the snow, and the black helps them blend into the shadows of the forest.

10. Spring is the mating season for pandas.

Female giant pandas are in heat once a year for only two to three days each time, usually in March to May each year. A pregnancy lasts about 5 months.

Females often mate with several competing males, while a male will also seek out different females to mate.

After mating, male and female pandas live separately, and the work of den building and rearing young is completed by female pandas alone.

A newborn panda cub weighs only 100 grams (3.5 oz). They are fur-less, pink, and blind. Their iconic black and white color coat grows after about three weeks.

Pandas are usually born in August. So, if you want to see cute panda cubs, come in August.

We have compiled more facts about baby pandas.

12. Pandas do not hibernate.

Giant pandas do not hibernate because their bamboo-based diet prevents them from storing enough fat to sleep through the winter.

Pandas are not afraid of the cold. Even in temperatures as low as -4°C (25°F), they can still be found walking in groves of bamboo with thick snow.

13. Pandas use scent to mark their territory.

Trying to pee higher and rub higher is a non-confrontational way of competing for mating rights.

14. There are two giant panda subspecies.

There are Sichuan giant pandas and Qinling giant pandas. Qinling pandas make up only 18.5 percent of the total giant panda population.

The soil, climate, and vegetation of Sichuan are very different from that of the Qinling Mountains, so the appearance, colors, and body shape of the giant pandas in the two places are different.

The two pandas are of the same origin, but separated by a large river and mountains and further isolated by human activities. Paleontologists estimate that they broke off contact 50,000 years ago, and then began the process of independent reproduction and evolution.

15. Giant pandas are no longer endangered!

Thanks to conservation efforts to save giant pandas, their population is now over 2,200. Their wild population has increased to 1,864, and the number of captive-bred giant pandas has reached 422. Therefore, their threat level has been reduced from "endangered" to "vulnerable".

Visit the Cute Pandas with Us

If you want to see China's lovely giant pandas, we can tailor-make a tour for you to see pandas according to your particular requirements.

See our most-selected panda itineraries below for inspiration: